Translation from Spanish by Scott Ezell & the author

[EDITOR’S NOTE. In his new gathering, The Whipping Boy (El niño de varas), Javier Taboada fuses all his resources as a poet (investigative poetry, translations, total transcriptions, news excerpts, etc.), in the great tradition of his avant-garde & modernist predecessors, at once broadly international & markedly American (both north and south). In the process he uses the procedures of extreme collage to create a narrative, brilliant & foreboding by turns, of the modern & ancient ways-of-the-scapegoat as an instrument of political, social, & religious overreach & cruelty. His is a world, in short, in which present & past come together to stand as images of our own time & of the real dangers that we face & will continue to face as we try to move forward & evolve. (J.R.)]

Feed them and keep them clean.

Place them at 10 points in the city.

Force them to beg for one year.

put it in a common treasury.

Gather the 10 in case of these calamities:

Select the ugliest. Name him pharmakós.

Dress him in special clothes.

Give him a backpack with cheese

Wreathe his head with garlands

a headwrap or a conical cap.

Give masks to the other 9 and undress them.

directly to a river

no wells no ponds

If there is no water,

go to a road or train tracks.

The 9 will escort the pharmakós.

Spectators may line both sides of the path

If they do (and as a sign of repentance)

they should scratch their faces

or rip out their hair.

The 9 may beat and intimidate the spectators

After crossing the city:

1. If there is a water flow

the 9 will beat the pharmakós

and try to drown him

2. If there is no water flow

the 9 will beat the pharmakós

tie him to the first tree they find

and try to burn him

he may never return to the city

If the pharmakós survives and reaches another town

and considered a god.

Give the common funds to his relatives.

Elect a new member for the following year. 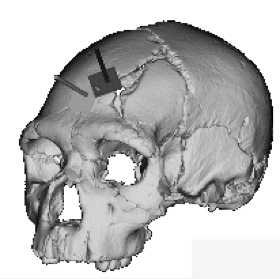 half an inch apart

from bregma / or fontanelle     each

an opening towards light

the thunder
and its four pebbles

the spirit dwells in the forehead
he knew it?

maybe he rehearsed his moves

maybe he rehearsed     lying down

maybe he considered an hour

of the second sun
the old sun bending on the mountains

maybe he planned a hoax 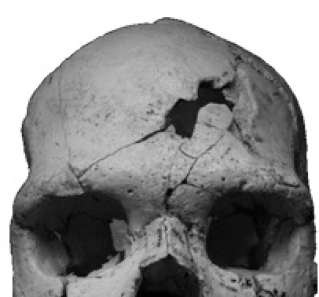 it’s certain he was right-handed

and pre-Neanderthal cranium 17
a young individual (male or female)

whose third molar attests
to recent passage
into adulthood

and they were face to face

maybe he
dragged the body to the pit

maybe he misjudged the weight
and had to ask for help

and maybe
maybe just that noise

its slight delay
(what is the speed of a body
in free fall?)
made him feel something akin to joy

SOME NOTES ON THE PRECEDING

Pit of Bones, cranium 17 is about the discovery of “the earliest case of lethal interpersonal violence” in the hominid fossil records. I’m trying to recreate/elucidate the cause for that murder (its motivations, planning, corpse disposal), since there are no evident “ritual” tracks in the cranium. Maybe the murderer just wanted to get rid of someone annoying, or just different.

Pharmakós event is a reconstruction of the “scapegoat” ritual (called pharmakón, with its double meaning: illness and remedy) in ancient Greece. The old polis need of purge leads us to a present in which a certain ethnic, religious or political group (always marginal) is thought to be a threat to the safety of the city.

Javier Taboada (Mexico City, 1982). MA in Classics. Poet and translator. Among others, he has translated the full works of Alcaeus of Mytilene (Poemas y Fragmentos, 2010), Jerome Rothenberg’s Testigo & Milagros (A Further Witness & A Poem of Miracles, 2017), and Katherine Mansfield’s The Garden Party and other stories (upcoming, 2018). He is the author of Apothecary Poems (Poemas de Botica, 2014) and Nacencia (2017).