Toward a poetry and poetics of the Americas (35): from Simón Rodríguez, 'American Societies,' 1828

from American Societies
Translated from Spanish by Javier Taboada

asking for a reform &
being able to admit it

search in many ways,
Reformers

can’t find the true one.

Societies tend to have a way to exist, very unlike the one they have had, & from which they are intended to have.
Men of these last eras —
reprimanded by the labor endured in useless attempts —
dissatisfied with the apparent convenience of the known Systems —
tired of hearing & reading pretentious praises to irrelevant things, & sometimes to what has not happened yet —
fed up with being abused in the name of god! the king or the nation —
they want to live

in the 19th century
demands MUCH PHILOSOPHY
the
general interest
is crying out for
a REFORM
&
AMERICA is called on
because of the circumstances, to undertake it
this may seem a daring paradox …
… it doesn’t matter …
the events will prove
what’s a very obvious truth
America must not servilely imitate
but be ORIGINAL 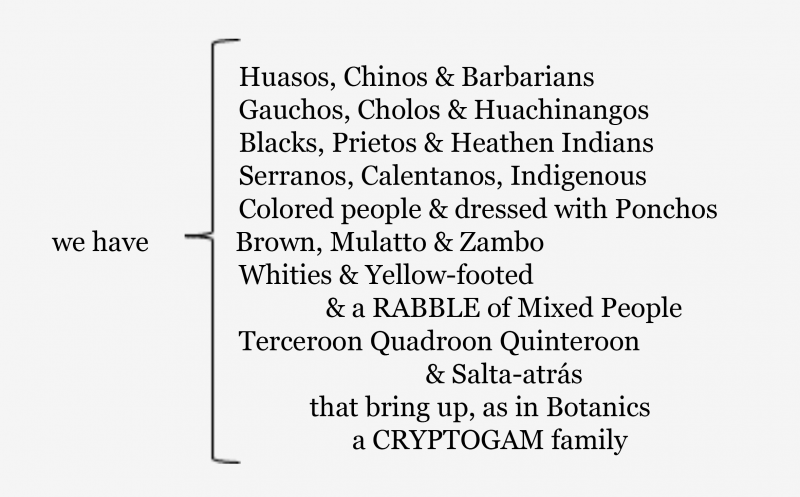 Where will we look for patterns? …
– Hispanic America is original = original must be their Institutions & Government = & original the ways to establish one & another.
we either Invent or we Err.

America is called (if those who govern it understand) to be a model of good society, with no other work than to adapt. Everything has been done (mainly in Europe). Seize the good — strand the bad — imitate with judgment — and for what is lacking invent. — Simón Rodríguez

(1) Educator, essayist, and philosopher, Simón Rodríguez was mainly known for being the tutor of Simón Bolívar (see above) and of the humanist and poet Andrés Bello. However, Rodríguez’s innovative thoughts and reflections towards the intellectual, idiomatic, and creative independence of the Americas were gathered in a monumental work-in-progress, American Societies, which was published in successive editions from 1828 to 1842.

(2) Scholar Rafael Mondragón explains the nature of the work: “It was a philosophical book which would be published in installments. [The book left] blank spaces for the readers to scratch out and modify the text. [Rodríguez] would gather his reader’s letters to integrate their reactions in the writing of each new chapter. The book would be distributed throughout the Americas via a continental subscriber’s system. To conclude his work, Rodríguez invented a new way of writing, playing with typography to paint the page, and imagined ways to convey gestures and emotion on paper.” (in Periódico de Poesía, UNAM, October 22, 2018). For all of which, here it is — in his own words (translated from the Spanish by Javier Taboada) — a key to Rodríguez’s system (1840):

by placing   words or
phrases       in the center of the page

Ellipses are painted      by putting a dot
under the omitted word

This is the aim of the reading’s principles

The Writer must dispose the page to achieve the same result as the orator
thus the art of Writing requires
the art of Paint.

(3) Rodríguez’s typography and spatial use of the page precedes Mallarmé's groundbreaking Coup de Dés by almost fifty-five years. American Societies is in that sense an early avant-garde work as we now conceive it.