Six Poems from 'Angel of Fire,' translated by Sergio Sarano

That deep and mighty voice
had already manifested itself through the charms of its revelation;
colts of untamed whiteness
knock at the golden gate of your dreams
the third heaven, enwreathed by faces of wrathful beauty,
opens its gates, allowing you to witness
fathomless thought-expanses
manifold forms of frozen energy,
tight, dynamic sidereal colony arrays
and beyond all bastard consideration
lie the judgements of form, there to settle your steps through immortal mazes
everything rests upon light-scaffolding
ultramarine & plumbago, gold & vermillion
musicking the habit of rhythm to cloud-flights,
huge songbirds stripped of their malice
tweak at the image of abstract reason
a content singular to all logical sources.
The parabolic configurations of your ramblings
when you, nostalgia-stricken, tried to access the past.
A boundless bazaar of unseen architectures,
surrendered, recaptured; dreams within the spirit,
where logbook entries show transhumant presences.
Obituaries lost to the relics of remembrance.

And that slowly moving purple threat,
vast, unconscious communities, sleepless
at the rising stair of their reversible automatisms,
troubled by the science-glow of endless possibilities,
the victims ate of the dead gods
and the fire crackled, twisting their rage
their eyes became embers of awe
they sought shelter in wreckage, waveringly,
only the rustle of grasshoppers is on their trail, bile-tainted thoughts
sniffing through dunghills of chores past.

and in the silence of my afterthoughts
gorgeous dolphins plunge their chests
into the pursuit of their happiness
their passing by the clang of my heart,
rapt in vision,
awed at the rhythms of their deftness
washed in surf-weft I say to myself:
the sea is hereby confirmed in my presence
the sea is covered in the gentle satin of a god

fragrant frankincense in your inner-secret ducts
and that throbbing, panting god
like a hero scathed by his prowess
softly overcomes
the warm ivies climbing up my ankles
and the sun’s breath snuffs
at my tanned back, lynx-like;
twilight hour, vesper grays,
pale pinks mirrored underneath the waterflow

storks in search of meal along the ebbing tide
try out their skill, time & again
tangled up in constant neck-fugue
and, as if breaking off from their higher cognizance,

the wind sketches out their childhood dreams.

by way of soundwaves the message reaches the bobcat, the quail,
the owl, the hawk, the eagle, & the tiger,
in night’s silence they conjure a counsel.

Swathed crackles, leaf-storm whispers
mnemotechnic natural resources
glory-spirit hovering the atmosphere
the unspoken majesty of heaven extols herself in the dignity of thought

and so, behind dream-borders humans find solace

creation reveals its magic powers
from a distance, light `draws in unassailable objects

closer to the human condition,
eager allure, praiseworthy performance
a murmur-winged blue ghost
is presided by its cosmic brainpower.

[The following commentary is taken from the gathering of North and South American poetry (“from origins to present”) that Javier Taboada and I are now preparing and that includes a different poem of Martínez’s, but Sarano’s attempt, as shown here, is the first at a broader range of translation. (J.R.)]

In saying which, he emphasized his life as an outsider artist and poet, reflecting the world as he lived it on his own terms. Born in Tequila, Jalisco, within a traditional family, his path took him early on to Tijuana in Baja California and then to years of wanderings in and near Mexico City, where he constructed thousands of works-of-art “built,” as fellow poet Alberto Blanco describes them, “with aluminum foil, tin, cigarettes, and chocolate wrappers collected in the street, pressed with great force and consolidated with his strong hands to give them form.” And further: “He used to spend endless hours swimming in the icy waters of the Pacific and nights in the cafés of the central Revolución Avenue [in Tijuana]. There he devoted himself to rest at times, but, above all, to what he called ‘building’ … drawing, painting, writing.” In this “[he] made no distinction between ‘building’ by way of drawing or making sculptures, objects, writing poems, or doing many other activities.”

In all of this, his work and life resembled that of other “outside” artists and poets, and like many of them — or like avant-garde artists everywhere — he explored and broke the boundaries between the arts in new and often astonishing ways. 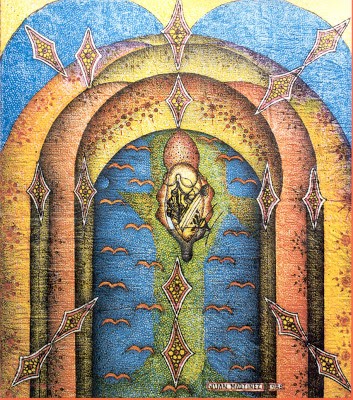