[Milton Resnick was a very visible and dynamic artist when we met him in the early 1960s, but beyond that he was also a persistent practitioner of poetry, less in a public sense than as a release for ideas and feelings that were a necessary supplement to his life’s work as a painter. I have written elsewhere of what he meant to me then and now, but I would like to stress here what he brought home to me about the need for poetry in the life and practice of a wide range of artists from his time and from before and after. I later was able to complete, along with Pierre Joris, two large books of selections from the poetry of Picasso and Schwitters, and to publish translations of my own from Arp and Picabia among a number of Dada and Surrealist forerunners. When Milton committed suicide in 2004, he left behind at least sixteen envelopes of unpublished, often handwritten poetry with some forty poems in each.  The poems that follow were written in the desperation of his later years, when the overall brightness of his earlier abstractions had changed to figurative depictions of what I would take, rightly or wrongly, as the terror (still luminous) within. Yet even where he turned his anger against life and art, as he often enough did, the work retained a sense of art as a necessary celebration or as a talisman, his only one, against the demons that would later overwhelm him. What remains, the poems and paintings both, seem of a piece to me, and I present them here as such.

The following posting is in commemoration of the recent opening of the Milton Resnick and Pat Passlof Foundation building in New York, for which I’ll do the first of what’s intended as an ongoing series of poetry readings, scheduled for this October 11th. The Foundation’s primary aim is “the preservation, exhibition, and publication of works by the Abstract Expressionist painters Milton Resnick and Pat Passlof, as well as other painters working in that tradition.” The relation of that work to poetry is also on noteworthy display here. (J.R.)] 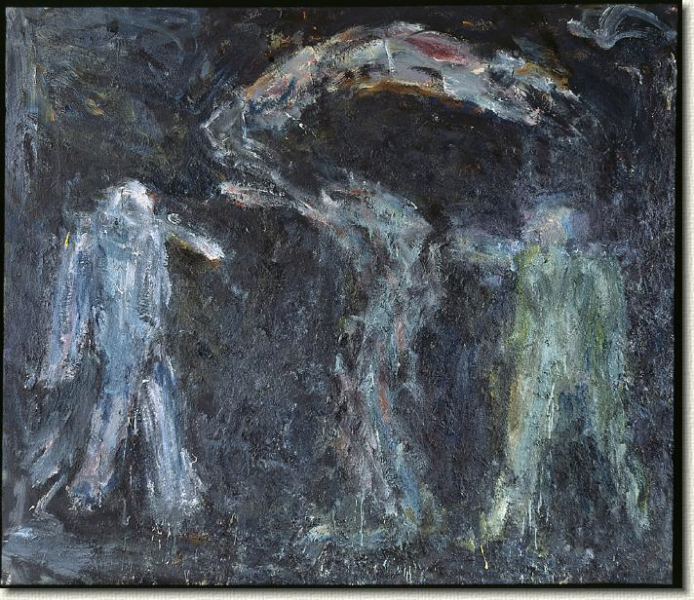 An accident on the mountain
showing the superiority of chance

I fell and thought I saw horses in the sky
the horses shiver
they don’t understand if you don’t whip
what’s more false than the horse of dream
the race, the grass, the sun
I should doubt for a painter nature is a paradox
but you don’t need me to mix colors
what one likes does not trot out of painting
dreams still function
they could be expressing the mystic
the indistinct line of nature wanted for great art
I know this anxiety
allowable in the forced loneliness of the studio
and for the god-forsaken Jew hiding as someone else
but for the god-like that explode in song and dance
the drum won’t do
and idealistic protest will not win the field
for the years deliver us of pity
yesterday for instance I stopped reading about
the earthquake in Mexico
I thought the news was getting beyond nightmare
beyond everchanging shadows lying in wait for dawn
the rosy-fingered beyond the likely
as for me I hardly recognize the day
It’s so early something in the air threatens
insects the horrors eat
they need the blood you need
they take from us that we have none
cast in hell as usual
if all that talk of sin comes to pass
the parades I shall see
new light on what I know and feel
all in a single drop is nothing
in the presence of the mountain
a mad thought —
I don’t look a thing grinning in pain

Black Hollows On the Horizon

writers without a clue are a little better than

granted whatever you do is up to you

in case you die pay for it in the next life

but here in Chinatown once the jewish center

you get the idea it’s not heaven

you need something in your pocket

a spark in your heart

until the inevitable next world

oh how existential it will be without noise

without cooking smells from next door

no spitting on the sidewalk

no tears no trembling when evil burns

and everything is art