Al Filreis convened Christopher Stackhouse, Maria Damon, and Devorah Major to talk about a poem by Bob Kaufman titled “Suicide.” The recording of Kaufman performing the poem — outdoors in San Francisco, in a park, it seems — can be seen and heard in one of the final scenes of Billy Woodberry’s documentary about Kaufman’s life and work, And When I Die I Won’t Stay Dead. We have extracted an audio-only copy of the poem as performed and you can hear it here. The text of the poem can be found on p. 112 of the Collected Poems of Bob Kaufman (City Lights), coedited by Neeli Cherkovsky, Raymond Foye, and Tate Swindel. (Devorah Major, who joins us for this PoemTalk conversation, wrote the foreword to the Collected.) A copy of the poem’s text can also be found here, below.

“Suicide” is just three short stanzas, but our group found a great deal to discuss — about the lines and phrases of this complex expression of survival, and about the many ways this poem teaches us about

Bob Kaufman’s modes of art and life overall. Two dealers open the scene, named obliquely yet there’s no doubt about them. They are what’s extant after the big botch of the US, which can only be what Kaufman means by “the largest colony / of the new world.” Who could have predicted that it would all come down to this — to these dealers, but also to the particular way Vinne gets around and moves around. He’s “stromin.” He’s sauntering easily, aimlessly (or supposedly so), and performatively. So easily, in fact, that the speaker has made this facility his natural appellation (“stromin vinne”). What our PoemTalk group discovers as we talk about this poem — about Kaufman’s understanding of Fanny and Vinne as survivors of the colonial catastrophe — is that it, the poem itself, as it goes, does its own verbal and ideational stromin. Way back, at the start, the “first man was an idealist,” but then came the Fall. The first truth (true knowledge) brought him down by causing the realization that this person was responsible for the whole world. At this moment he “sat down” and began to make art. What were the tools of this making? A little piece of string and a sharp stone. The PoemTalkers deem this to be an essentially musical art. The string is strummed or plucked, or the first man’s breath moves through it like a lyre. The stone is sharp but not the ideal instrument for suicide.

Not death, then, but survival through stromin, through sitting down (to write?), through what art remains and then might thrive. Bob Kaufman is Adamic, imagining the precolonial possibilities of expression.

Zach Carduner engineered and directed this episode of PoemTalk by way of our virtual Wexler Studio and through the medium of Zoom. Zach also edited this episode, as usual. We wish to thank our partners at the Poetry Foundation, and Nathan and Elizabeth Leight for their ongoing support of this series. 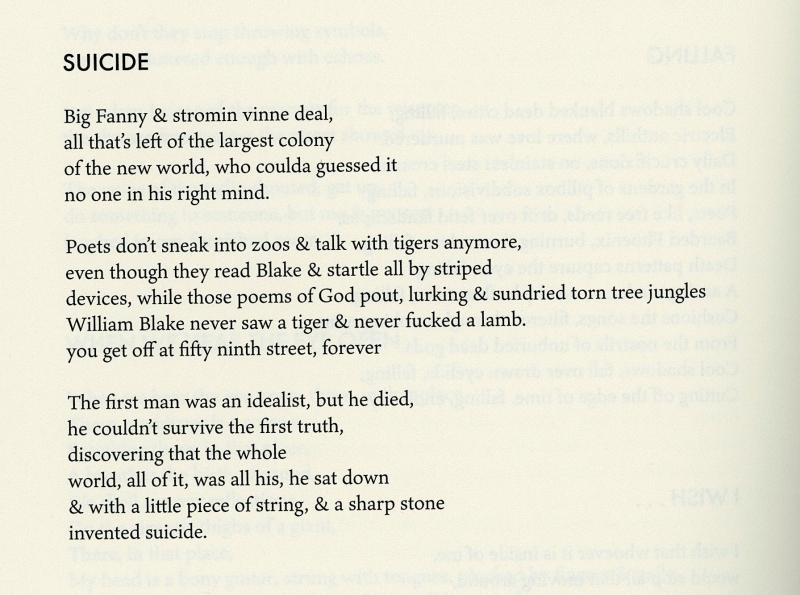 During our round of “Gathering Paradise,” Maria Damon mentioned a pandemic-time project of her own — a weaving that featured the design of the DNA of a silkworm. Here is a photograph of the work when it was in progress: 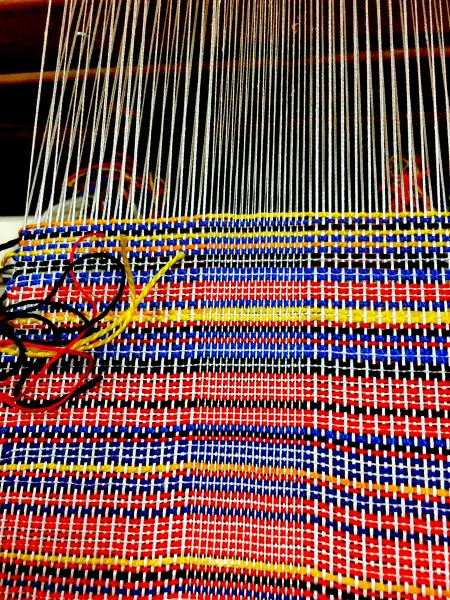