Several years ago I started to listen to the recordings of David Antin’s talk poems available at both the archives of Antin’s papers at the Getty Research Institute and his author page on PennSound. At first my interest was mostly casual.

On March 26, 2003, before an audience gathered for an event sponsored by the SUNY Buffalo Poetics Program, David Antin performed a fifty-minute talk-poem called “War.” It seems to have been a tense gathering. The second US incursion into Iraq had begun six days earlier, led by George W. Bush, who features prominently in Antin’s talk that evening. After delivering “War” this once, Antin apparently never transcribed it — nor apparently then, in his usual mode, lineated this talk-poem. Did he not sufficiently value it, then or later? Is it perhaps too unlike his usual talking performance? Perhaps it too directly referred to the political problem of the moment in relation to the poet’s work?

(“games for eleanor” was a set of two-person games composed between 1965 and 1966 as a deck of twenty-three cards intended for reading in subsets of six to thirteen cards selected at random. D. A.)

you come into a strange room

as always you are afraid

A great inspiration, radical model, dearest friend, and ever an iconoclast.

David Antin was one of the great American poets of the postwar period, transforming both the practice of poetry and the essay. His “talk poems” are chock full of startlingly philosophical insight, compelling autobiographical turns, and bursts of comic genius. His work is the record of a person thinking out loud, weaving narratives on the fly, and making poems that are as engaging as they are wise.

Antin’s work can be read at his EPC page and seen and heard at PennSound. 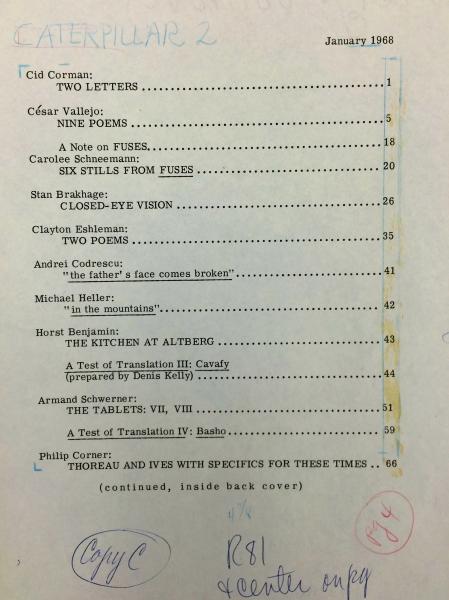 On December 23, 2015, in San Diego, Jake Marmer interviewed David Antin and Jerome Rothenberg. Today the recording of the interview has been added to the Marmer, Antin, and Rothenberg author pages at PennSound. Here is a direct link to it: MP3 (1:35:55). Here is Jake Marmer's introduction to the interview:

Imagining a Poetry That We Might Find: Conversation with Jerome Rothenberg and David Antin

Video I made of most of David Antin's talk earlier this month. Antin talks about living with Parkinson’s Disease, about an early job, about Freud, and much in between. Antin’s talk was part of the launch for his new selected talks, edited by Stephen Fredman, titled How Long Is the Present (University of New Mexico Press).

Grateful acknowledgment is made to Jake Marmer, who has consented to the publication of this essay here. — A.F.

I remember listening to Marc Ribot’s band Ceramic Dog, thinking: My entire brain — the main line and the back corners — is burning to grasp this music. That night, the avant-garde guitarist played what was likely an entirely improvised set with three fellow musicians. I tried to follow each new direction the music took, each new interaction that erupted; I was fully consumed in some new state of attention, witnessing all the multiple levels of the work coming together in front of me.

I wanted to improvise poetry as Ribot had improvised his music. It’s not a new idea. Jack Kerouac, like a number of other poets of the Beat era, wrote ecstatic, unedited compositions that felt raw and spontaneous. Kerouac famously explained that he wanted to be known as the “jazz poet blowing a long blues in an afternoon jazz session…” But his improvisation was limited to the writing process. Once finished, these poems remained more or less static throughout the publications and poetry readings that followed.

From 'Refuge from the Ravens: New Lyrical Ballads for the 21st Century'

With an afterword by Jeffrey Robinson