Years ago Jim O'Donnell - a pioneer in internet-age teaching - said that the role of the teacher would change from that of provider of knowledge... to that of "front end to the universe": from be-all/there-all giver in a room full of receivers and final arbiter of what constitutes relevant knowledge to medium or gateway or traffic cop gently guiding but never blocking the learners' pathways outward to a world of information and knowledge and text that made the teacher a speck on the horizon yet still great in importance if she or he would thrive in the role of medium. Not maker or giver of the medium, but medium itself. There are classrooms today (and it has not much to do with computing hardware available, though a minimum is required...namely a good wireless connection for everyone) in which the new role is possible and the teacher loves playing it. From time to time here I have mentioned Kenneth Goldsmith's teaching, in part because I adore what Kenny does and in large part because I happen to have access to it, a close look at its development. Kenny's artwork did all this before he taught regularly, but now the pedagogy is catching up with the rest of the project. Here are a few paragraphs Kenny sent me not long ago about what the hell is happening in his classroom:

During a recent classroom visit of a visual artist, it occurred to me that we've reached a new paradigm in radical pedagogy. The artist entered the room, greeted the class and began his lecture with a PowerPoint presentation about his work. While he was speaking, he noticed that the class -- all of whom had their laptops open and connected to the internet -- were furiously typing away. He flattered himself that, in the traditional manner, the students were taking copious notes on his lecture, devouring every word he spoke. But what he was not aware of was that the students were engaged in a simultaneous electronic dialogue with each other about what the artist was saying, all played out over the class listserv, which they all had instant access to. 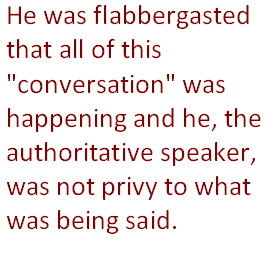 During the course of the artist's lecture, dozens of emails, links and photos were blazing back and forth to each other; each email elicited yet more commentary and gloss on the prior emails to the point where what the artist was saying was merely a jumping off point to an investigation of such depth and complexity, that the artist -- or any ideal of traditional pedagogy -- would never have achieved. It was an unsurpassed form of student's active and participatory engagement, but went far astray from what the speaker had in mind.

When later told about this, the artist was very disturbed. His ego was mauled and when shown the blizzard of gloss, was more dispirited as he felt much of what had transpired was irrelevant and even irreverent (hastily Photoshopped detournments of images and concepts he brought up). He was flabbergasted that all of this "conversation" was happening and he, the authoritative speaker, was not privy to what was being said.

"in the war betwen flesh & paper"

I picked up a copy of Tuli Kupferberg's The Book of the Body (1966). Tuli K. was an American counterculture poet, author, cartoonist, pacifist anarchist, publisher and, famously, co-founder of the band The Fugs. On the back jacket: "In the war between flesh & paper paper made out of flesh wins every time." 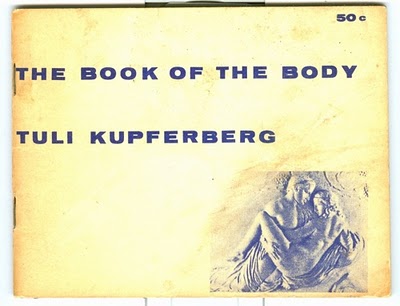 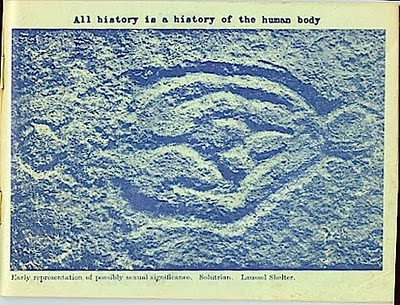 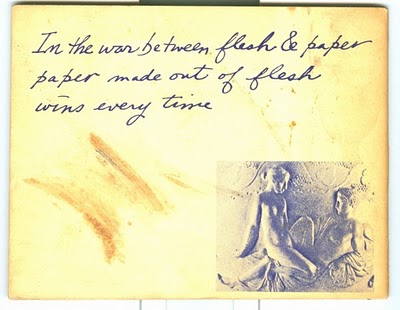 I've recently published a long essay on the poetry of Bob Perelman. It's called "The President of This Sentence." It's about the convergence in Perelman's writing of two parallel and also, at times, convergent analyses--one of modernism's rise and fall; the other of the state of Cold War at the point of giving way to New Left and countercultural skepticism. Here is a link to the whole essay, and here is the opening paragraph: