As a business model fails, forever is pragmatic

In the postal business, there’s a term of art (as it were): the forever stamp. Forever stamps are always equal in equal value to the current U.S. first-class mail 1-ounce rate. The term has been in use for some years, but hasn’t really been relevant until fairly recently. In eras when rates were stable — we all remember the days when the announcement of a rate increase was an event, causing a slight shock and even protest, something for which we anyway had to plan — a “forever stamp” was essentially superfluous.

In early 2006, Maged Zaher emailed me at Jacket and asked to have one of his  poems considered for publication. As often happens, he forgot to attach the poem. A pithy correspondence ensued and it continued between us even after the poem, my software mission, was published in Jacket issue 29. At some stage in our email exchange Maged asked me if I’d be interested in writing a poem in collaboration with him. So began a project that continued over a year or so and resulted in twenty-one poems that can be read as a continuing long poem.  Susan Schultz published the poems that we’d assembled and titled  farout_library_software as a Tinfish Press chapbook in  2007. 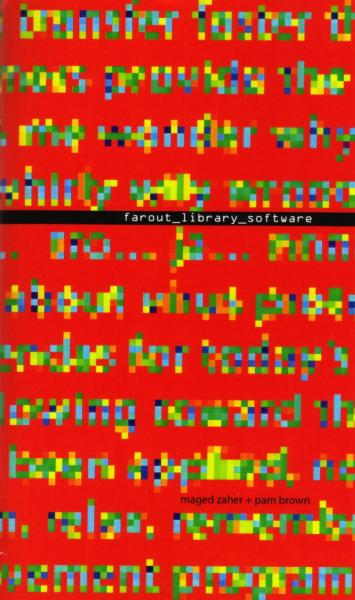 To keep you from going Defining key aspects of the modern — can’t be done simply. But why not try? Here’s one. The modern poem isn’t about expression or expressiveness, something the poet has urgently wanted to say. It’s primarily neither topical nor personal in the accepted 20th-century sense of the person who has things “inside” that must be said, written, conveyed. The poem isn’t telling you you should or must know something. It doesn't cover or fill a gap, a need, a want. The poem is merely (oh that huge “merely” — but I don’t mean it trivially) a means of keeping a reader from going from it, a detention, a planning to stay, and then — in it — is a remnant of the poet, all we know of him or her at that moment, then (now, the time of coming upon the words) and here (in the poem itself, making an inside that's nowhere else but where it is).

To the extent that the above definition is apt and useful, then the modern verse mode derives largely from Emily Dickinson, who in more than half her poems makes the point I've made above the matter of the poem.

And Cid Corman, not otherwise deemed Dickinsonian, is surely getting at this in this poem:

And here is a recording of Cid Corman reading that poem.

Today Jacket2 and Jacket were listed for the first time in WorldCat, the international library catalogue.

j/j hastain begins “crepuscular,” from the relational elations    of ORPHANED ALGEBRA, (with Eileen Tabios, and hereinafter referred to at treooa) with this simple problem: “The dilemma of belonging. What of that has to do with things exterior to us and what of it has to do with our own regard of exteriors and interiors?” (27).  hastain responds to Tabios's sequence of prose poems about orphanhood, in particular those orphans who are older, considered too old to be adopted.  The orphan who becomes part of Tabios's family (provenance Colombia, destination California) is doing word problems in algebra.  But these problems are more complicated than the math would indicate.  Arriving at a reference to walls that “slant at 65-degree angles” the child thinks of “the man you longed to call 'Dad.'”  He is not father, but “potential father.”  What appears outside the “glass-less window” is “a lucid mountain.”  The man has scarred the boy.  Their relation is not lucid.  Hence, the “answer” to the equation is “'indifference > hatred'?”  Equations do not generally end with question marks; this one offers a “resolution” only in ambiguities.  Most of us consider indifference to be a thing better than hatred.  But an orphan, who needs feeling, an emotional relation, longs for it to be strong, not absent or ambiguous.  His regard meets the world's disregard in an equation whose answer is no answer.  As hastain writes in “LUCIDITY DISCERNING”: “The desire for a father is not a father” (30).

But Tabios and hastain are most engaged in what happens when relation between persons occurs, or between genders within persons, namely in the TRANS of their “relational elations.”  They are fascinated by displacements, yes, but also in “active placements,” whether those are relationships within adoptive families or within individuals whose gender-identities are not normative.