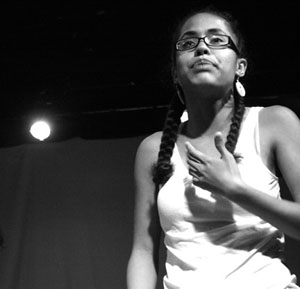 A conversation with Nicholas Perrin

Whenever I went to Vancouver in both the run-up to and the aftermath of the Olympics I always sought out Nicholas Perrin for thought-provoking analysis, deep thinking, and good cheer.

Nicholas deftly blends creativity with brass-tacks organizing in ways that forge solidarity and hope. He is an artist, poet, and cultural activist who studies and works in Vancouver, Coast Salish Territories. A former member of the Kootenay School of Writing, Nicholas currently curates a series titled Imminent Future with a collective of friends who began working together during the Olympics. He is also a member of the Lower Mainland Painting Co, a conceptual artwork and research initiative seeking to situate shifting forms of value and the modes of labor and negotiation through which artists work and dialogue amidst broader social forces and struggles.

As I mentioned in a previous post, he teamed up with Cecily Nicholson and Am Johal to create the “Safe Assembly Project” at the VIVO Media Arts Centre during the Olympic moment in 2010.

An Ellsbergian task for poets

Maybe the poets could come up with a better term than ‘whistle-blower?’ That’s what I recall Daniel Ellsberg asking.

It was the spring of 2005 in Walla Walla, Washington, when I had the luxury of a day’s conversations with Daniel Ellsberg, famed for releasing the Pentagon Papers in an effort to end the Vietnam War by revealing how high-level officials were misleading the public. Ellsberg was visiting Jules’s class and giving a lecture at Whitman College, where Jules was employed, and because Jules was employed, he was busy, and I was not so busy, and, thus… I discussed poetry with Ellsberg over green tea. He was an early publisher of Frank O’Hara’s at the Harvard Advocate, he recited lines of poetry from memory, and he urged me to read Robinson Jeffers.