Marginalia for Susan Howe's 'Spontaneous Particulars: The Telepathy of Archives'

My annotations, made for the first performance of the essay for the Trilling lecture at Columbia on Nov. 31, 2011:

Following on from part one, 'experimental' poetry, then, ranges mightily across all manner of media - from strict text juxtapositions right through to poets experimenting on their very own corpus: not as body of work, but on their own body as work. And Aotearoa-New Zealand is no exception, as we shall soon see.

An interview with Action Books

From the screen to the streets...

Action Books is making moves on the indie lit scene

I interview Johannes Göransson of Action Books. Here are the questions and the answers. You can read more about Action Books at their website, http://actionbooks.org.

a. How did you get the idea for your press, and who started it?

In many ways the most important push for us was realizing that no U.S. press was daring enough to publish my translations of Aase Berg, a major young Swedish woman poet who was writing these wild poems unlike anything that was being published in the U.S. I assumed all U.S. presses would be interested in something new and wild from another culture, but I soon found out that the opposite was true: that’s exactly what U.S. presses did not want to see.

It has been 100 years since Ezra Pound published Cathay. And of all the things that Cathay brings to mind as a convergence of cultures, it's never regarded as a Hispanic text. I'm being provocative here, but not without reason; I want to comment upon certain aspects of the provenance of modern(ist) poetics as a specie of cultural syncretism. By provenance, of course, I mean the history of ownership or residence of ideas and their migrations, and the provenance of modern(ist) poetics has a longstanding dialog between Anglo America and Spanish America.

In Nick Montfort's new book from #!, from Counterpath, he uses this code to generate the poems. I like the code as a poem in/as itself. 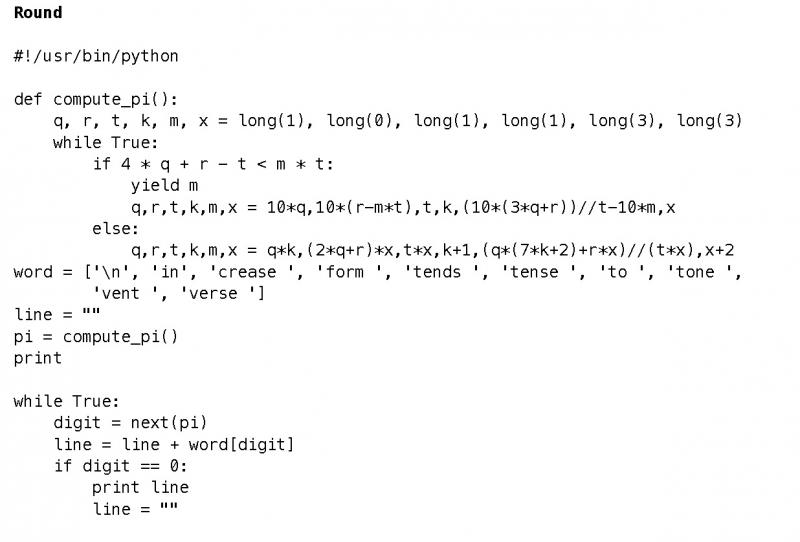