"We're in the Same Zone"

After many years of hosting our Writers House Fellows program (since '99) and teaching the Fellows seminar each spring, I think I've experienced my share of challenges--challenges typically at once programmatic and intellectual. The project of squeezing into the little cottage some very giant personalities, intellects, and--yes--literary egos is no inconsequential venture. Some I expected to be difficult (John Ashbery--not an ego but shy and sometimes reticent) turned out to be easy. Other folks I'd heard would be sweet and accommodating presented all kinds of problems--requiring hard work but always (fortunately; so far) successful. I must say that the Writers House itself does a good deal of calming and charming. The late Susan Sontag, who spent three days with us in April 2003, wss generous with her time, focused on the students, and truly pleased that so many attentive readers surrounded her. But, as anyone who met her knows, her intellectual rigor is unforgiving. This made me a little nervous, understandably, since her first meeting would be for three uninterrupted hours with a group of 22 undergraduates--none of whom had read anything by her prior to our month-long series of readings and discussions. Toward the end of her stay, I interviewed her and hosted a public conversation with her--our typical Tuesday morning Fellows event. About a third of the way through the interview, Jennifer Snead, then our Director, asked a complicated question, which Susan immediately appreciated, and it caused her to praise the Writers House scene in a way that is completely memorable to me, and (obviously) pleasing. Click on the video player above and watch a grainy copy of the old RealVideo file we made back then. The audio is fine and you can watch the whole recording or listen to audio (the whole or segments) by going to our Sontag page.

Take the No Out of Now

On September 26, 2000, we were visited by the rare and remarkable Gerd Stern, who in the sixties designed one of the first multi-media discotheques, which he named "The World." Stern was a poet and multi-media artist (I say was; in recent years he has been a businessman--or, more properly, a businessowner). His book, First Poems and Others, was published in 1952. A second volume, Afterimage, appeared in 1965. During the early 1960s Stern started using cut-out words to create visual collages, and soon after that started making kinetic pieces using flashing lights, and electro-magnetic components to construct poem sculptures. These were first shown at New York's Alan Stone Gallery and in Stern's first one-person show at the San Francisco Museum of Art. The next phase of Stern's work included multi-channel word visuals and sounds cut out of the real world, titled "the Verbal American Landscape." Influenced by Marshall McLuhan's written work, Stern appeared with and was associated with McLuhan for a number of years. At the Writers House he came with one of his electro-boxes--a truly groovy relic of the pre-computer days of aesthetic psychodelia. And he explained, among other things, how we can all take the no out of now. Only after that can we take the ow out of now. We were all persuaded, at least for the moment, that this is the order of things. More about Stern and his Writers House visit here 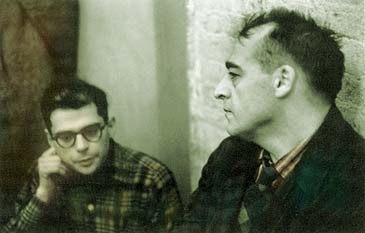 Kyle Gann in 1994 set lines from a poem by Kenneth Patchen to music. "Since college," he has written, "I have been a big fan of the San Francisco poet Kenneth Patchen, one of the most compassionate, lively, human voices in modern poetry. (I think of him as the John Cage of poetry, only far more emotional.) In July of 1994 my mother-in-law died, and in August death was on my mind. I had always loved Patchen's line, 'There are so many little dyings that it doesn't matter which of them is death. I sampled his voice reading it from one of his Folkways recordings, deciphered the inadvertant pitches and rhythms of his speech, and based this work for keyboard sampler on the phrase. At first the sentence is imitated by sampled toy piano in a microtonal scale, but gradually the toy piano is replaced, phrase by phrase, with Patchen's warm voice." Now listen to the mp3. Gann's piece is based on Patchen's poem "And What with the Blunders". Gann's site offers more of his music in mp3. If Patchen seems alluring, be sure to read Henry Miller's essay, "Man of Anger & Light."

On frets about the death of the book

A Counterargument I Made Back in '97

Back in the heyday of claims about “the Internet revolution” — I’d say 1997 was a peak year — there was naturally a backlash. I sympathized a little bit with the backlashers, since so many people who knew nothing about computing and information technology participated in the hype. But mostly I did not sympathize. In ’96 or so I was asked to write a short review of Barry Sanders’s A is for Ox: Violence, Electronic Media, and the Silencing of the Written Word (Pantheon, 1994) and I used it as my chance to respond to those who fretted about the impending demise of the book. (I knew Barry a bit from our days researching together at the Huntington Library and actually — from those good conversations in which he seemed no troglodyte — I was surprised when reading his book how much I disagreed with him.) Here are the first two paragraphs of the review (the rest can be found here):

Some anxieties become merely historical. One is surely Barry Sanders’s. His book A is forOx: Violence, Electronic Media, and the Silencing of the Written Word (Pantheon, 1994) is full of worries that the flow of data across the screen is replacing the cozy curl in the armchair — frets about the death of the book. I’m not really much concerned with the problem of making a rejoinder to Sanders, or to Sven Birkerts, whose book The Gutenberg Elegies: The Fate of Reading in an Electronic Age (Faber, 1995) eloquently joins the trend of English profs become anti-computing Jeremiahs. I’m more concerned, actually, with the way in which the logic of Sanders and Birkerts and others affects our thinking about universities at a critical moment when teaching, the intellectual relation of teacher to student, and basic university structures, can dramatically change for the better if we take a few conceptual cues from the information age. The parallels between the two situations — how electronic media alter the book and how they alter education — will have to remain somewhat implicit here, for lack of space. (But, partly to prove my point, I invite discussion of the animated sort these printed pages won’t enable; see below.)

For Barry Sanders, computers are intellectually fascistic. He thinks that when young people read books, as opposed to electronic text, they experience a kind of authority (the author’s) that is engaging and not forbidding — entreating interaction. Horrified, he imagines that when a “young person … enters into an electronic world, [it is] one in which the rules are immutable and pre-established. … He or she comes to know that authority, real knowledge, and skill, reside in the machine, dictated by an anonymous disembodied programmer. … Authority resides in the book as well. But it is authority, not technological ukase.” This so completely mistakes electronic text that one hardly knows where to begin. Sanders is wrong about the relationship between the authority of the programmer and the individual reader of e-text. If anything, authority is both more transparent and more effectively open to response in the new media for reading and learning than in the context of print — and here is where we might conceive of a powerful author-reader/teacher-learner relation for the near future.

Five Recordings of "This Is Just To Say"

I hope readers of this blog can forgive me for gushing about PENNsound's William Carlos Williams page. There you'll find links to every recording of Williams that has been found so far. For the moment, most of the poetry readings he gave are available in single recordings (not broken up by poem), but we have been able to clip the longer files and produce five versions of WCW reading "This Is Just to Say." Each is a downloadable mp3, so click away and enjoy: 1 2 3 4 5. And here is the text of that famous poem.