In January 1957, a man named Arthur B. McQuern, describing himself as a retired Iowa farmer then living in "this artist town on the west coast"--Laguna Beach, California--writes to express indignation against the modern art on display there. McQuern was especially incensed by a recent exhibit, which caused him to write an essay he mailed to Congressman George A. Dondero. Here is a small portion of that essay:

"...the essence of the 'modern' doctrine apparently is to believe in nothing...The idol adopted by the modernist writers is a twentieth-century hybrid character which is made to appear as being neither good nor bad...The ultra-modernist is unconcerned with beauty and truth...By a standard of ethics peculiar to the 'moderns' truth has no stability or positive purpose but to them is only a point of view shifting and drifting with the tide of sentiment...In both literature and art a contemptible disregard for reality...."

Donald Davidson, from “Grammar and Rhetoric: The Teacher’s Problem” (1953):

In our time, the conjunction and has too often been the mark of a timid evasiveness in which I do not mean to indulge: “He was an old man who fished alone,” writes Ernest Hemingway, “and he had gone eighty-four days now without taking a fish.” The philosophy of Hemingway, as man and writer, is latent in that characteristic conjunction and. It bothers Mr. Hemingway to think that there may be some relationship between objects other than a simple coupling. “A” and “B” are there. The inescapable act of vision tells him so. But Hemingway rarely ventures, through grammar and rhetoric, to go beyond saying that “A” and “B” are just there, together. Similiarly, our diplomats and Far Eastern Experts long had a habit of declaring that there was a Red Russia and a Red China, with the tender implication that such a conjunction was entirely innocent. Political theories for nearly two centuries have coordinated liberty and equality, but have too often failed to tell us, as history clearly shows, that liberty and equality are much more hostile than they are mutually friendly; that the prevalence of liberty may very well require some subordination of the principle of equality; or, on the other hand, that enforcement of equality by legal and governmental devices may be quite destuctive to the principle of liberty.[Source: The Quarterly Journal of Speech 39, 4 (December 1953), p. 425.]

Christian Boltanski's artwork/installation, "No Man's Land": a huge crane and a 25-foot-high mound of salvaged clothing rising from the floor of the Park Avenue Armory’s big drill hall. Every few minutes the crane’s giant claw will pluck a random assortment of shirts, pants and dresses from the mound and then release them to flap back down randomly. Visitors can watch the action — set to a ceaseless, reverberating soundtrack of thousands of human heartbeats — from ground level, standing amid dozens of 15-by-23-foot plots of discarded jackets that extend in all directions from the mound and that may - should - evoke refugee or death camps.  "No Man's Land" was described in the New York Times: here. 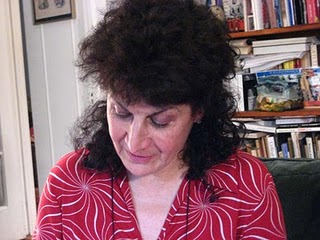 PennSound's Maggie O'Sullivan page includes a recording of a discussion with Penn students in Charles Bernstein's "studio 111" seminar. Michael Nardone has transcribed the session now and here is a portion:

PENN STUDENT:
Thank you for your close reading, Ms. O’Sullivan. I was wondering if you could describe the relationship between performing your work and writing it.

As you’ve probably heard, I often find my work is quite difficult for me to read from the page. Writing it, I hear the sounds often in my ear. But having to perform it, all the difficulties emerge. There’s lots of disconnectiveness and disjunctiveness that is kind of working against how I sort of, how sometimes it seems it may be read.

PENN STUDENT:
Would you consider, sort of, maybe, performing it to be more body intensive than, I guess, writing it.

O’SULLIVAN:
Well, writing is a body-intensive activity, totally. Absolutely, totally. The whole body is engaged in the act of writing. Whether it’s on the computer, with using a pen in the hands. The breath is involved in all activities. But with the performing, there are others that you have to connect with, and the place of performing also figures on it.

PENN STUDENT:
A number of your poems integrate different languages, musical notes, pictures, and streaks, and they push the possibilities of poetic forms on the page. I was wondering whether this is supposed to conflict with the words, compliment them, or maybe even both.

O’SULLIVAN:
The words working as part of all this kind of radical shifting—

This talk was presented in response to a request for a manifesto to conclude a four-day conference on new writing practices. The conference took place in February 2010 at the Banff Centre for the Arts, Banff, Alberta.

My dicta are four in total. In sum they are:

1) Writing isn’t the only thing that is changing or needs to change. 2) The other kinds of changes might demand an attention very different in kind from our usual. 3) Deep down, most of us do not really want these other changes to come. 4) The ideal site might be where things happen rather than get presented or taught.

Now I will elaborate a little on each:

1) If all this talk about true modal changes caused by (or aided by) writing in new media is going to be more than just talk, then we must also seek, or at least encourage, major changes in the institutions that were and are organized to assure the continuation of the old mode. Which is to say: if publishers and universities and art centers as organizations (with budgets, staff hierarchies, physical spaces, customs of credentialing) are set up assuming these binarisms:

--and if the relationship I write/you read is in the process of really changing (and indeed most of us here do our work on the assumption that it has already changed)--then all other aspects of the relationship must also be subject to that change. We cannot expect the traditional I write/you read binarism to disintegrate and then just hope that everything else in the writer/reader (and publisher/consumer, teacher/learner) relationship will similarly wither away, for there are actual forces maintaining it.

2) So the most obvious thing one can say is that the conversations we have been having this weekend are not just about writing. We should think every bit as innovatively about the institutions and organizations that rose up around the technology of the book as we have in conceiving the writing that goes on inside or near or astride these institutions. (Complete separation from them is a nice dream, but only as nice and dreamy as other separatisms.)

3) The honest truth is that most of us associated with such organizations - again I mostly mean universities and publishers and art centers, but also humanities institutes and foundations supporting artists – probably don't want the rest of the changes to follow from the disintegration of I write/you read exclusivity. This is especially true of I talk/you listen. (I make noise and you listen silently. I am producing something; you for the moment are unproductive.) Like the poetry reading, the lecture--being an ideology as well as an artifact of a certain phase of technology--is not something most people here are ready to give up. But I'm certain we will all be better off when we’ve put an end to the lecture; and anyway an alternative mode is among the main implications of what we do. So what is truly interactive? How many of us have been promised that such-and-such a gathering would be “interactive” only to find out that what people really want to give--but rarely to receive--is a series of monologues?

4) I do not believe what I'm saying is to come about virtually. It is very much a matter of physical design, of planning (and, incidentally, of planning to stay), of working with brick and mortar. We need to build spaces that are unconducive to what I'm doing right now.

Back in the mid-1970s, when he was promoting “oral poetry” as an alternative to the traditional presentation of writing, Jerome Rothenberg said the following: "As for poetry 'belonging' in the classroom, it's like the way they taught us sex in those old hygiene classes: not performance but semiotics. If I had taken Hygiene 71 seriously, I would have become a monk; & if I had taken college English seriously, I would have been an accountant." Yet Rothenberg did teach poetry in the classroom, and so admitted to a realization I very much admire and have myself used as a guiding principle: “the classroom [can] become a substitute for those places (coffee shop or kiva) where poetry actually happens & where it can be ‘learned’ (not ‘taught’) in action.”

As pre-digital as the metaphor of the kiva is, I still like it. I like it because it pushes the distinction between teaching and learning, and because it imagines spaces where “poetry actually happens” rather than where it is presented as if it’s not there and thus must be talked about.