watch as I teach Wallace Stevens's "The Snow Man"

I lead a discussion of Wallace Stevens's "The Snow Man" - a video that has been captured for YouTube in two parts.

medical students should know about Nazi doctors, don't you think?

Thanks to Sam Sharf, vigilant newspaper editor and former student of my course on the holocaust, for making me aware of this announcement:

This figure is now official. By powering down yesterday afternoon between 3 and 4 PM, the University of Pennsylvania consumed less energy to the extent, figured as cost, of $110,000. Yes, $110,000 in less energy used in one hour by one large institution. This meant: people across the university switched off or dimmed lights, unplugged computers, turned off air conditioners and fans. (I noticed that many folks went outside for meetings and breaks.) I’m sure the office of the Executive Vice President will announce the savings in kilowatts, which will of course be the most significant data. But, still, $110,000 that would otherwise be unavailable?* I hope Craig Carnoroli, whose office organized this (in conjunction with PECO), decides to spend the money on something very visible and very green. On 364 days of the year I am glad I’m not doing Craig’s job, but today I would feel more certain than ever that large institutions can push hard to cut back. This might seem a small step, but let me give an example of collateral effect. Carton Rogers — the wonderful, kind, smart and thoughtful director of our libraries — asked his staff to turn off all lights for this first-ever trial in powering down. He was told by his building folks that some of the lighting in the stacks was so old that they worried about whether they could be successfully turned back on again afterward. This of course would be a hazard so they made the right decision to leave those lights on. But don’t you think that today Carton is looking into rewiring those lights? These are 1950s-era bulb types, copper-wired no doubt, wires winding their way through a large building whose open stacks are like a rabbit warren. Let’s get back deep into these old buildings and see what green economies can be achieved.

Well anyway, Craig, if you’re reading this: I can think of a poet I’d like to hire. With an okay salary and all the wonderful Penn benefits, it would come to around $100,000 annually. You can keep the $10K for whatever. I promise to hire someone in the field of ecopoetics.

* I suppose we need to balance this against loss of productivity. This is probably why such a stunt is no good during the height of the academic year. But it is perfect for a summer afternoon. Maybe 4-5 would be better. We should consider shifting full-time staff work hours to 8-4 instead of 9-5. That 4-5 time is in Philly one of the hottest hours of the day (I’m betting that 2-3 is the hottest).

class on Ashbery back by popular demand

This earlier post has been so often visited and requested that I've decided to re-post. I know this goes against both the spirit and design of blogs (after all, you can just search for the earlier entry), but so be it: 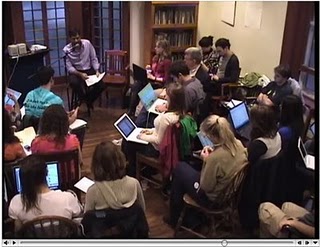 Recently my students and I finished up a "chapter" of English 88 on the New York School. The final class in this part of the course was devoted to some collaborative close readings of several poems by John Ashbery: "The Grapevine", "What Is Poetry", and "Hard Times". (Well, the discussion of "Hard Times," due to lack of time at that point, is really just me reading the poem and making a few comments.) A number of people watched the video live on their computers at home and work, and several of them telephoned in to ask questions or make comments. Here's your link to the video recording of the class.