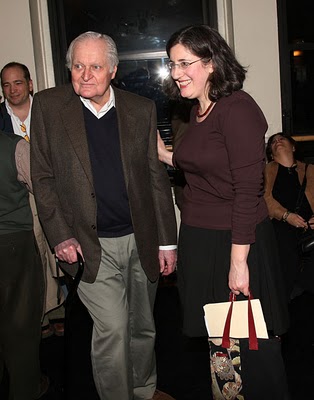 Last night Poets House sponsored the 15th annual poets' walk across the Brooklyn Bridge. Tina Chang, the Poet Laureate of Brooklyn, read midway on the bridge: "Brooklyn Bridge" by Vladimir Mayakovsky. Bill Murray, who's been a supporter of poetry through Poets House projects, came along for the walk. Murray read several poems to the crowd before the walk on the Manhattan end of the bridge: "Supermarket in California," Levertov's "The Rights," Ferlinghetti's "Coney Island of the Mind."

Some thoughts on the importance of women as baseball fans begin with the ironically positive effect of Charlie Finley’s otherwise usually destructive mania for marketing his Athletics. When the team resided in Kansas City, he deemed it a good stunt to hire the first woman to be part of a baseball radio team. Her name was Betty Caywood, and she spent most of her on-air time talking about happenings in the grandstands. For Finley it was “another way of keeping attention away from what was happening on the diamond” — in other words, drawing attention away from poorly played baseball. The diversionary stunt had the ironic effect of focusing listeners ever more on the whole game. By permitting Caywood’s narrative peregrinations away from the game being played on the field, Finley was not, to be sure, promoting equality of gendered perspective, nor was he expressing any kind of belief in the voice of the fan. But he was exploring the (actually quite profitable) world of words emanating directly from the fan-centered game, the convergence of baseball and language that “generate[s] excitement — / a fever in the victim,” as Marianne Moore described it in a poem called “Baseball and Writing.” Moore was a fanatical Brooklyn Dodger devotee, and her poem, which begins “Writing is exciting / and baseball is like writing,” was written not in response to a game but to “post-game broadcasts.” To whom,” she asks, does the victimhood of generated excitement apply? “Who is excited?” “[P]itcher, catcher, fielder, batter”? On the contrary: “Might it be I?” This is the poetic “I” — the speaker, but, more generally, the voice teaching us to see what should be seen. This is the “I” that observes “Carl Furillo’s . . . big gun” (which drove in four of the team’s six runs on a day remembered in the poem) but celebrates “fans dancing in delight” in response. Moore was devoted to the game but the lens of her devotion was a wandering eye that spots, for example, “the Dodger Band in [section] 8, row 1.” That motley ensemble was famously capable of improvising — for example, playing “Why Not Take All of Me?” when the local tax collector happened to walk by. As a form of expression analogous to Don Zimmer’s surprising infield dexterity (feats Moore elsewhere extolled), such extemporaneity was the whole poetry of the Dodgers.