Libby Rosof and Roberta Fallon, a few years back, decided it was time to go wholly into the work they loved - reviewing art and advocating for local artists and arts organizatioLibby 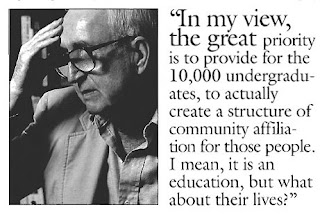 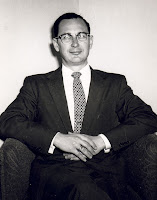 I'm increasingly interested in the year 1960, and am toying with the idea of writing at length about it — the year generally (if such a thing is possible) and the year in American poetry & poetics more specifically. Certainly a turning-point year in the larger context, and probably in the latter somewhat more narrow context as well. Take a look at my 1960 blog.

I'm intrigued by the photo here. It's a shot of someone's father, a man named Phil — or "papa" according to the scant explanation I found randomly on someone's blog. The man's expression is, to me at least, completely ambivalent. It says self-satisfaction and it says major dread, both somehow. (Dread in the limit of the smile, the way the tie is tied or, rather, the posture of the neck, and in the way the left hand is tucked under the right in the pose.) The inscription on the back reads: Pop Je ne sais pas l’annee. The photo was taken February 1960, as marked.