Teaching in the 'New Media' classroom

In the 'is it worth it?' department 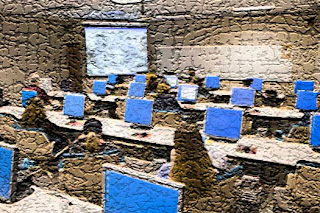 Despite great claims made for the introduction of computer and other new-media hardware and software into the classroom, and huge expenditures made by colleges and universities, 60% of the undergraduate students surveyed for a 2007 report by the Educause Center for Applied Research said that they disagreed with the statement, “I am more engaged in courses that use technology.”* The issue, of course, is not whether we should be equipping our classrooms with the necessary current tools; we should. No the issue is whether teachers feel that in such a setting the box marked “learners’ engagement’ has been checked. 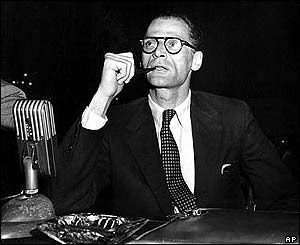 Arthur Miller might well have been a communist. He wrote for communist publications and seems to have had a significant editorial role (under a pseudonym), was involved in a series of CPUSA meetings, gatherings and projects, and there's a boatload of further circumstantial evidence. He was of course questioned by the House UnAmerican Activities Committee but managed to avert direct response to The Question, and quasi-evoked the 1st and 5th amendments to stave them off. In any case, it seems that the HUAC investigators did not have even the beginnings of the evidence Alan Wald has gathered and published in a chapter in his book Trinity of Passion, the second of his three-volume narrative of American radical writers in the 20th century. I mention Wald's Miller findings in my review of Wald's triology - in Left History's Fall/Winter 2007 issue. Here is the review (PDF).

Miller's having been affiliated with--perhaps a member of--the CPUSA doesn't alter the meaning or significance of his plays, doesn't change at least my own sense of his political views. But consider that Miller has been written about and written about--many dozens of scholarly articles, monographs by biographers and biographical critics. Are we so unattuned to the traces of American radical culture that we can't discern the evidence that Wald--not a Millerite, not a scholar of dramatic literature--found with a bit of hard work? For one thing, one has to read the long-forgotten (and in the 1950s suppressed or unavailable) communist and communist-affiliated journals and magazines. The fact is, when most academic critics of Miller's mode and genre were being trained in the graduate schools, or were getting tenure, this kind of research would not have been favored. That's saying the very least. We know a ton about his relationship with Marilyn Monroe. We know nothing (until Wald's work) about his political affiliations in the 1940s. Nearly every high school student has had to read The Crucible or Death of a Salesman but there's no way that the actual anti-anticommunism of the first play, or the anti-mercantilism (the devastating effects of alienated labor) of the second, would permit Marxist explanation if there had been a demonstrated connection between the beloved "heterodox" playwright and an actual Marxist political party in this country.

A note on distance learning

I jotted this note in 2002: 'For people who run universities, especially those hard pressed to claim innovation and to respond somehow to the "information age," the allure of cliche postmodernity is great. The medium, to them, is the message. (Finally.) "Distance learning" is a fat pipeline, a delivery mechanism for content, the content being secondary ("x," a curricular blank to be filled out of material already in the course catalogue). But content, roughly speaking, has been the means by which intellectual communities have formed, and in the politics of the supposed coming cyber-university, real virtual communities are labor-intensive and expensive. And they have all the down sides that any communal activity does when it functions freely within a centrally organized organization. To resist, we assert that the medium is not the message. If the message has been experimental, either pedagogically or aesthetically (or both), then we can say that the message is (and has long been) the message. The phrase "distance learning" is replaced by "distributed learning." The community is enriched rather than dispersed by the introduction of e-media to teaching and learning.'

The Penn Current currently runs a story by Greg Johnson on the virtual Penn campus in Second Life, including, of course, our virtual Kelly Writers House.