The skinny on Schuyler's line

I fell in love with James Schuyler’s poetry when I was twenty. Since my beloved has (still!) not received the recognition he deserves, I was initially motivated to write about his work by critical and dismissive readings of it. As an undergraduate I wrote an honors thesis on his great long poems — “The Crystal Lithium,” “Hymn to Life,” “The Morning of the Poem,” and “A Few Days” — but my interest was in both his long and short line. Almost twenty years later, critics have yet to give much attention to Schuyler’s adept use of line breaks.

In an early review of The Morning of the Poem (1980), Stephen Yenser emphasizes the improvisatory feel of Schuyler’s work. Though he grants that “[w]hen he wants to, he can write tightly unified poems” with recognizable accentual and sonic patterns, his general sense is that “Most of the … ‘skinny poems’ [are] in short free verse lines so arbitrarily broken that they seem locked forever in mortal combat with the syntax.”[1] In a long review of The Collected Poems (1993), Wayne Koestenbaum offers a more nuanced reading of Schuyler’s use of the line, elaborating the claim that “The heart of [Schuyler’s] poetics is erratic, tender, skittering enjambment.”[2] He meant this affirmatively, of course — but in what sense is Schuyler’s enjambment “erratic”? It is irregular and unconventional, but Schuyler’s poetics are nothing like the sloppy free verse of some contemporary poetry, which does indeed read like prose arbitrarily broken into lines.

For the most part Schuyler wrote what he himself called “skinny poems,” clear descendants of Williams’s variable foot: sentences are broken into short phrases over many lines, with no more than two or three beats or accents per line. Strong enjambment is the rule: a complete clause rarely coincides with the line. And the long poems, written mostly in very long enjambed lines, are rarely ordered by the sort of parallelism we find in Whitman and Ginsberg. But even in the long poems, the sometimes startling line breaks contribute to expression by emphasizing the first and last words of the line and creating suspense — as in this short passage from “Hymn to Life,” which typically moves from the lyrical to the everyday and back again, finding the lyrical in the everyday:

…. Or a cut branch of pear blooms before its time,
“Forced.” Time brings us into bloom and we wait, busy, but wait
For the unforced flow of words and intercourse and sleep and dreams
In which the past seems to portend a future which is just more
Daily life. The cat has a ripped ear. He fights, he fights all
The tom cats all the time.[3]

So many of Schuyler’s skinny poems also display an artful, expressive use of line breaks that it is hard to know where to begin. Among my favorites are “So Good,” from Hymn to Life (1974) and “This Dark Apartment,” the first poem in The Morning of the Poem (1980). “So Good,” which is something of an elegy for his grandmother, is typical of Schuyler’s short lyrical mode, in which the unit of the line is a unit of perception, as in Williams:

Sing to me
weather about
one bird
peck, pecking
on bleached
winter grass.
….
And for no
reason my eyes
and the sky
fill with
tears.
….
Snow that
turns to rain,
pain, physical,
and emotive, too
these pass. They
once weren’t
here: they’ll go
as Granny went
embanked in flowers
so long ago, so
cold a cheek to
ask a child
to kiss. “Those
birds,” she
would have said,
“are starlings.
They came from
England.”[4] 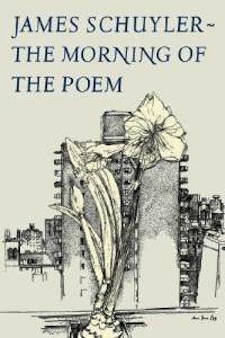 Short lines and frequent line breaks slow us down enough to appreciate the process of shifting feelings, the observation of small and poignant details — and they also serve to isolate and emphasize striking perceptions and multiply possible meanings and senses across one line and into the next. The fact that snow, rain and physical and emotional pain will pass away is comfort, until it is modified by the comparison to the death of “Granny […] / embanked in flowers” — which elevates even pain, because after all, we are lucky to still be alive. The short lines and line breaks also make the lovely sonic patterns more audible, as in “so long ago, so / cold a cheek to / ask a child / to kiss.” When Granny’s sweet speech is quoted, the expressive purpose of the line breaks shifts, to mimic the deliberate, informative tone in which she shared simple facts about the world with her grandson — facts that are also sad in their simplicity, as they fail to explain pain or death.

In “This Dark Apartment,” the line breaks contribute just as much, though somewhat differently, to subtleties of expression. The poem is composed of five ten-line stanzas, and each line has two or three beats or accents. The immediate situation is that, for the first time, the speaker has noticed his apartment’s view of the UN building, which triggers a painful memory of greater revelation. I begin with the second stanza:

I remember very well
the morning I walked in
and found you in bed
with X. He dressed
and left. You dressed
too. I said, “Stay
five minutes.” You
did. You said, “That’s
the way it is.” It
was not much of a surprise.

Then X got on speed
and ripped off an
antique chest and an
air conditioner, etc.
After he was gone and
you had changed the
Segal lock, I asked
you on the phone, “Can’t
you be content with
your wife and me?” “I’m
not built that way,”
you said. No surprise.

Now, without saying
why, you’ve let me go.

How I wish you would come
back! I could tell
you how, when I lived
on East 49th, first
with Frank and then with John,
we had a lovely view of
the UN building and the
Beekman Towers. They were
not my lovers, though.
You were. You said so.[5]

At first, each line unfolds the narrative of discovering the addressee in bed with someone else. (As if this weren’t bad enough, it happens in “this apartment / I took so you and I would have a place to meet[.]”) The suspenseful enjambment enacts the painful feeling of suspense and the improvisation of the speaker’s reaction, which dramatically develops our sense of the relationship. In the next stanza, the strong enjambment works toward poignant emphasis as well as suspense. Rather than blow up at his lover, the speaker pleads “Stay / five minutes.” Evidently he feels unsure whether to hope even for that, as in the delay between subject and verb: “You / did.” In turn, the lover’s dominance is underscored with another instance of strong enjambment: “That’s / the way it is.” The last line of the stanza, which nearly coincides with a complete sentence, sounds sadly certain and conclusive, especially in contrast to the strong enjambment of the preceding lines: “It / was not much of a surprise.”

The line breaks function similarly through the rest of the poem (and there is comedy in what is disclosed without suspenseful enjambment, as when “your wife and me” appear on the same line), down to the poignant close in which the speaker distinguishes his former lover from close friends he roomed with (O’Hara and Ashbery). “They were / not my lovers, though. / You were. You said so.” The emphasis here falls on “not,” of course. The speaker still longs to share mundane, minor observations with the former lover, and insists — in the only line that includes two complete, emphatically declarative sentences — that once upon a time, the lover also cherished, or at least acknowledged, their intimacy.

Schuyler may not be the first poet to come to mind when we think of mastery of the line among contemporary poets. Perhaps he should be. Like the work of other New York School poets, Schuyler’s poetry is rightly associated with improvisation, process, play, and chance, but these attributes are not antithetical to artistry. His innovative use of the line, especially of strong enjambment — even when it seems, at first glance, highly irregular or risky in its radical breaking of the syntax — serves specific purposes of expression acutely and consistently. In the end, Schuyler shows us, with characteristic understatement and modesty, that form and theme may be as deeply unified in so-called free verse as in more traditional forms.