The city poet who knows, like no other, the names of all flowers. Of whom else can it be said, he is our best (or only) descriptive poet? Was this ever said, as it might have been, of John Clare? “You can’t get at a sunset naming colors.” Every poem, a view. The sense in each of a scrim of exact detail so carefully woven as to be seamless, impregnable to the monsters raging, ready to pounce or tear through from the other side.            The central character, if any, of most of his poems is the day, the poem geared to get it down, nail it in its lineaments as it appears and goes: “a nothing day,” “day the color of a head cold,” “Dark day,” “a day subtle and suppressed,” “May 24th or so,” “a day like any other,” and so on. His writing has what filmmakers call “room tone,” c.f., Charles North’s remark about Schuyler’s perfect pitch.

One hot day in 1961, when I was working in the office at ARTnews, Tom Hess said, “Go down to Jimmy Schuyler’s and pick up his reviews.” I hardly knew Jimmy then, but I had heard from John Myers that he had been having psychiatric troubles. The reviews for that month were long overdue; Jimmy apparently had told Tom that he had them but in his present mental disarray couldn’t manage the trip uptown from his place on lower Broadway to deliver them. Once there, I rang the bell a few times and got no response. Baffled as to what to do next, I went to a corner phone booth and called Frank who suggested I try Jimmy’s number. That worked, and Jimmy buzzed me in. The apartment was a mess, Jimmy in pajamas sort of silently, aimlessly padding around the front room. No, he said firmly, giving me a somewhat stony look, there were no reviews. I left, feeling useless and rude, an intruder in someone else’s private soul dust.

Schuyler told an interviewer that, to engage his interest, he sometimes wrote the first drafts of his art reviews in verse lines, then later rearranged them, closed up and slightly altered, in paragraphs. According to Frank O’Hara, the 1950s ARTnews poets Barbara Guest, John Ashbery and O’Hara himself, used to show their monthly short reviews and longer articles to Jimmy for style checks. Frank said,  “Jimmy was the real writer; he knew where the commas were supposed to go.”

Cy Twombly [Stable; through January], fleeing for his creative life from the white hell of Black Mountain, shows Siberian slabs (those diamonds they’ve found there, what makes them so sure they’re not just frozen tears?). Fabulously underpriced. J.S. [1957]

The prose is golden, in the same sense as Jane Freilicher’s great painting Goldenrod Variations: the prodigious scope alive to, never stumped by, whatever vibrant detail is there, and the sense, too, that all this happens in time and constitutes, in its way, history, human and otherwise. Such accurately directed empathy taken to its eternal edge. About the hornet in the room in “Buried at Springs”: “One of us will have to go.” Or how incomparably, as if Francis Ponge were taking a refresher course in how real both things and the words for them can get, “Trembling, milk is coming into its own.” The under-appreciated (although now in reprint via NYRB) novel What’s for Dinner? does just what Henry Green ordered, “Ring tears from the stone.” The poetry follows suit, even increasingly edgier:

So many lousy poets
So few good ones
What’s the problem?
No innate love of
Words, no sense of
How the thing said
Is in the words, how
The words are themselves
The thing said: love,
Mistake, promise, auto
Crack-up, color, petal,
The color in the petal
Is merely light
And that’s refraction:
A word, that’s the poem.
A blackish-red nasturtium … 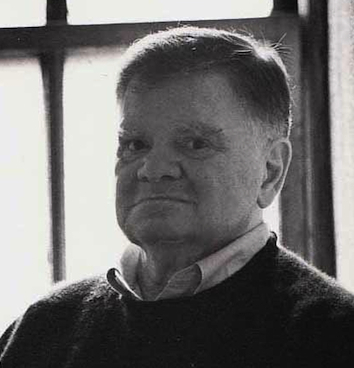 Dinner after Jimmy Schuyler’s reading at the Art Institute, Washington Square Bar & Grill, with JS, Tom Carey, Lynn, Kathleen Fraser and Bob Glück. Corner table by the door. The talk breaks into facing twos: J/T, K/L, Bob and me. Jimmy is gracious — it’s more of an after-reading group than he’d bargained for, and the restaurant is noisy, replete with piano accompanying a girl singer who can’t quite meet the old standards (“Am I blue,” etc.) head on. Eventually, I catch Jimmy’s face out of the corner of my eye — a look of sweetest sadness with a faint cry of help at the corners of his mouth. No coffee, no dessert, and Bob drives Jimmy and Tom back to the Friary.

The reading had been astonishing. Jimmy seated at a card table with French blue tablecloth, blue Mexican water pitcher, Chinese enamel tin mug. He read musically, steadily, softly intoning each word. A few flubs, where word or phrase got gummed. One poem — “Fauré Piano Quartet”: Fauré, Schubert, Chopin — that range of precise, stately, sorrowful piano, groundswells of his poems, with fully rounded, openly flung vowels. Something else: in the insistent patching together of detail — a thing said for each aspect in a day, a view. The whole took about 40 minutes. He enjoyed the funny parts, the audience’s response — “They were so nice,” he said after the applause died down. Melodious he was, as I hadn’t expected. An Anglo melody in part (Auden, yes, but then reaching back to clear, hard Chaucer), plus the chortle and edge of manic American fact. Newly heard among the poems: “Evening Wind,” “Eyes at the Window,” “Korean Mums,” “Now and Then,” “A Man in Blue,” “What Ails My Fern” (a crowd pleaser), and before those, he always seems to begin “Past is past …” (“Salute”). Most sound longer than they look on the page.

Showing Jimmy the plum tree in our Bolinas yard that occasioned a poem I wrote for him. The tree is now in flower, as then it was in bud. And three plants he wanted to know the names of — Watsonia, Solanium, Salvia — I didn’t know but Lynn told me later and I sent the names on for Jimmy’s gardening registry. And the rose he recommended: Belle of Portugal.

In last night’s dream I confused Jimmy with Milton Greene (not difficult — they are near-lookalikes). I was sleeping in the entryway to his studio when he appeared at the door. Before that, a non-sequitur party with jazz musicians, Ornette Coleman and others (not Jimmy’s scene at all).

Jimmy by the Bay, Minuses and a Near-Plus:
He hated the hills, the incessant up-and-down of them, in cars.
He hated the long cross-continental plane ride.
He liked Bolinas and the Friary. (He had really come to see Tom.)
He visited Don Allen with Bob Gluck.
Me: “How was Don?” Jimmy: “As asp-ish as ever.”

Blue is the hero of Three Friends at a Table, a blue that varies from a night-blue wall pierced by a shining grey window to one mixed with violet and pink in a man's sweater; or it becomes slightly chalky, a “French” blue on a cup, or that of an iris under artificial light, or one with a clanger to it in the enamel of a teapot, or one that looks silky in the geometric pattern of a blouse. It is air within the paint and gives it breath. — James Schuyler, “Nell Blaine: The View from 210 Riverside Drive,” ARTnews, May 1968.

At Yaddo, June ’68, no sooner had I read the start of that first sentence than I was off the bed and typing in title caps “BLUE IS THE HERO” up top of my poem-to-be. Eventually, I mailed Jimmy the poem, and he wrote back, revealing that in fact his line had been prompted by an earlier one by Frank O’Hara (also in ARTnews) about Fairfield Porter, “that luminous grayness which is the hero of much contemporary painting.” Then, closing the circle, in late August Jimmy sent a poem for my birthday, “Gray, intermittently blue, eyed hero.”

The first sentence is prose. I would not venture to say
the same for the second.

For all the kindness Jimmy showered on me, I was mostly at a loss as to how to please him. Partly, there was never enough quality time together for us to feel at ease with one another. Back in New York in 1971, I learned that Jimmy was hospitalized, and Maxine Groffsky got me invited with her to see him. Shy of sickbed visitations, I gave Maxine a pound or more of tangerines to take in my place.

Phone message from Anne Waldman this morning: Jimmy Schuyler dead of a stroke at 7 a.m. And looking at his typescript poems on glaring orange bond, with alterations scribbled in tentative, thin but ever upright script — plus an inscription in The Home Book: “for Bill / father of /  Moses — / love — / Jimmy /  Jan. 9, 1977.

Of your Charity Pray for
the repose of the Soul of

— Our Miraculous Lady of Kursk

'Pulverized language'
'Last Words' and 'Gimme a Swig'
A note about Whalen and Mallarmé
Spring, 1959
Working with Joe
Sheer Strips
Circa 1966
The education of poetry
Schuyler entries
Fresh air
Exhibit A