James Schuyler’s poetry gently checks the inclinations of the reader attuned to avant-garde sensibilities. It participates, on one hand, in the radical side of New York School aesthetics, dissolving the boundaries that demarcate individual selves and separate speech from poetry and art from life. Where the reader expects to find openness, fragmentation, and a mobile subject position, she finds them — but accompanied, always, by a countervailing attention to the experience of coherence. Sometimes, the persistence of ordinary coherence is oppressive:

is much as before. Night
slams gently down.[1]

At other times, it’s sustaining:

… When I think
of that, that at
only fifty-one I,
Jim the Jerk, am
still alive and breathing
deeply, that I think
is a miracle.[2]

But it is always matter-of-fact and never taken for granted. Repeatedly hospitalized for psychotic breaks, James Schuyler knew firsthand that things fall apart. Rather than fetishizing either chaos or the forms of order that might contain it, however, he finds his aesthetic in a bemused recognition of the limited and variable extent to which things also hang together.

The first and title poem of Schuyler’s first major book of poetry, “Freely Espousing” is an apt introduction to this aspect of Schuyler’s aesthetic.[3] The poem is a fractured manifesto, a disjunctive enumeration of what things “are worth celebrating” and what, on the other hand, “I am not going to espouse.” Like Frank O’Hara, Schuyler is temperamentally allergic to the self-seriousness of the manifesto genre. Where “Personism” sends it up with hilarity, “Freely Espousing” moderates it through continual self-moderation.

The poem begins in a hybrid vein of Whitmanian expansiveness (“… when I thought up the title I thought of it as Whitmanesque,” Schuyler remarked)[4] and Surrealist disjunction. Long, listlike lines of heterogeneous fragments only retroactively come into focus as a catalog of the kinds of things a poem might espouse: “a commingling sky,” “or Quebec! what a horrible city,” “the profit of excavating the battlefield where Hannibal whomped the Romans.” When the list turns its attention to language, the poem gets its first sustained thought and its first moment of self-revision:

the sinuous beauty of words like allergy
the tonic resonance of
pill when used as in
“she is a pill”
on the other hand I am not going to espouse any short stories in which lawn
mowers clack.
No, it is absolutely forbidden
for words to echo the act described; or try to. Except very directly
as in
bong. And tickle. Oh it is inescapable kiss.

The lines set up an opposition between words married to their meanings and words divorced from them: on one side, the mimetic clacking of lawnmowers, on the other, illness and wellness swapping sounds and shuffling contexts. Schuyler’s preference for the latter use of language goes hand-in-hand with the poem’s collage aesthetic, but the moment the preference becomes dogmatic it begins to erode. The “kiss” between sound and signification is far from necessary or universal, the poem seems to say, but total divorce is as poor a description of the poet’s experience of language as perfect marriage.

Forms of coherence proliferate in the remainder of the poem, from the linguistic to the perceptual, ecological, painterly, and interpersonal, while the form itself becomes increasingly organized. The lines get shorter, their length and indentation more regular:

if the touch-me-nots
are not in bloom
neither are the chrysanthemums
the bales of pink cotton candy
in the slanting light
are ornamental cherry trees.
The greens around them, and
the browns, the grays, are the park.
It’s. Hmm. No.
Their scallop shell of quiet
is the S.S. United States.
It is not so quiet and they
are a medium-size couple who
when they fold each other up
well, thrill. That’s their story. 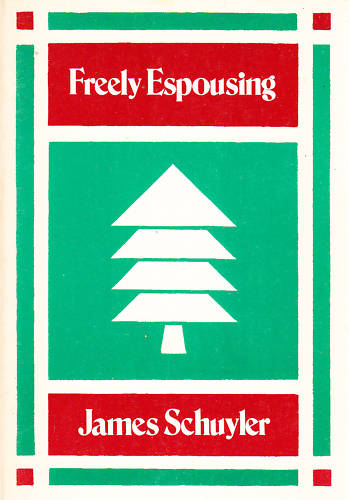 As if prompted by the reminder of an empirical relation between late-summer touch-me-nots and early-fall chrysanthemums, the painterly act in the middle of this passage undoes the aesthetic that would transform cherry trees into bales of cotton candy and dissolve the park into sensational browns, greens, and grays. The end-stopped lines with their terminal monosyllables effect a candid reversal of these impulses towards surrealism and impressionism, resolving the bales into trees, the greens and grays into the park. Like Fairfield Porter, Schuyler arrives at realism “alongside or from the far side of abstraction”:[5] he doesn’t insist upon coherence or its absence, he simply declines to disregard the limited degree of it that he finds.

This stepping back from the freedom of disarticulation to the fact of the feeling of organization is a version of what John Wilkinson calls discesa, after the Italian for descent: Schuyler’s distinctive form of bathos that registers his “resistance to both the sublime and the depths of extremity.”[6] Moments of humor, self-revision, and banal or bodily detail keep Schuyler’s poems from rising or sinking too emphatically, in the way that the bathos of “Jim the Jerk” undercuts the sublimity of “miracle” in “Trip,” quoted above.

The last lines of “Freely Espousing” show how discesa opens up a particular kind of affective experience. On one hand, “It’s. Hmm. No” evokes the self-censorship with which Schuyler, as a gay man, would have had to treat the “story” of his relationships in the Cold War–era United States, figured in the poem as both the patriotic symbol and the claustrophobic environment of the world’s fastest ocean liner. But it is also part of the process by which Schuyler reduces sex to the elemental. For Schuyler, the clear-eyed banality of describing sex as a matter of “folding each other up well” — the refusal to grant it the status of a sublime event — is what justifies his claim to the “thrill.” What makes the thrill thrilling, in other words, is that it’s produced by nothing more or less exalted than the convergence of two medium-sized bodies.