“Talk-It,” the speaker-cum-software bot of Heriberto Yépez’s video-poem “Voice Exchange Rates,” describes itself as a technology “designed to help poetry return to the righteous path of the avant-garde” by automating the poetic endeavor: the program reads, translates, and composes in a variety of languages and registers in accordance with the preferences of its human user. This hypothetical division of the writing project into specific but related labors — the completion of which is achieved by outsourced procedural means — forces us to consider the stakes of such extreme mediation in literary practice, and to weigh the costs of jettisoning the “human” from artistic production.

We might begin by contemplating its assertion that the “next Octavio Paz is going to write like The New York Times.” Here, Yépez illuminates and contests the protocols that regulate the admission of nonnative, polylingual, and transnational voices to the institutionalized “avant-garde” tradition. Inevitably, the tariff assessed on these poetries is one of deracination: a body of writing only becomes properly saleable once it is stripped of its material and cultural specificities. By naming this gatekeeping as another syndrome of globalization, the poem poses a critical challenge to the literary institution of Conceptual writing: is it really so aesthetically subversive to write like The New York Times within the confines of the art institution — or, rather, to reframe and concretize this writing as commodified word-object — when this very same institution already imposes a regime of prescribed unoriginality (better yet: fluency) on writers who do not fall within its racialized and nationalistic tradition?

For Yépez, we sense, the proposition of “uncreative writing” threatens to recapitulate the globalizing logics that treat immigrant populations as reservoirs of disposable, recombinant, and plastic laboring subjects. If his work flirts morbidly with the obsolescence of the individuated and coherent speaker,[1] it does so with the most pointed allegorical interest. We might say that “Voice Exchange Rates” works as a “radically mimetic”[2] demonstration of the technological processes by which literary subjectivity is policed and homogenized — albeit one that signals the metonymic relationship between this phenomenon of exclusion (or selectively allocated and highly qualified inclusivity) and the larger patterns of sociopolitical marginalization and worker precaritization that order and stabilize the neoliberal state.

It is in this curious respect that “Voice Exchange Rates” shares much with the avowed methodologies and goals of the most visible exponents of Conceptual practice. I would furthermore hazard that the poem offers a prescient corrective to their well-documented (and eagerly claimed) critical failure before the fact. The piece is interested in contesting original authorship; it makes use of textual reframing; it is sensitive to the aesthetic and formal suggestions of nonliterary media; and it, too, theorizes writing in terms of the systems and technologies that facilitate its delivery and distribution. But at the same time, it is unwilling to marginalize or suspend political urgency in order to ventilate these concerns; rather, it sees these problems as inextricably related. This is to say that while the poem “mirrors” the “leveling and loading media” that govern the artistic production habits of a complacent neoliberal avant-garde, and even, perhaps, “[replicates] the error under critique,” it refuses to feign historical disinterest in the course of this performance, or to confirm the structural resignation that has defined the institutional commentary offered by the bulk of Conceptual writing — or, at least, its most visible practitioners and exponents. 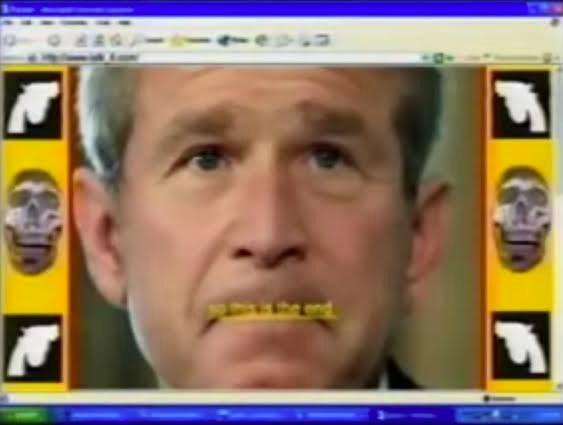 Do Bush-era announcements of the “end of history” find their correlate in aesthetic affirmations of unoriginality and resignation? Yépez anticipates and rejects both of these propositions in this work.

Place and Fitterman acknowledge that the embryonic situation of this aesthetic development is a “repressive market economy.” For them, this operational predicament is “banal, [but] nonetheless true,” and more importantly, inescapable. Indeed, its very banality stems from the impossibility — hence familiarity and redundancy — of successful escape from market logics. But where Conceptual writing has, in the main, formulated its critique in materially dehistoricized and aesthetic[3] terms — that is, in terms of the obligations (or liberty) to discard narrative in the wake of the “historical leveling”[4] effected by the inception of the digital archive — Yépez examines the collapse of authorial and historical stability as a politico-aesthetic crisis that can be negotiated only through the proliferation of voices and authorships. I want to propose “Voice Exchange Rates” as a model for ethically and globally interested conceptual writing precisely because it eschews self-congratulation and insouciance: it offers incisive critiques of the imperialist tendencies of the Conceptual turn in poetry,[5] even as it turns an eye to the ways in which authorial subjectivity is fractured, deauthenticated and selectively reconfigured under regimes of postindustrial capitalism that increasingly take shape along transnational lines and within digital spaces.

1. Yépez has described poetry as “series of techniques to construct — or, if [we] prefer, deconstruct — the subject” which rely on numerous literary figures, structures, and platforms, including voice, here “[understood] as the ways in which mind and body materialized, the patterns in which change interplays with memory.” (Heriberto Yépez, “Ethopoetics, What is it?,” Poems and Poetics, np.)

2. I’ve pulled these terms and concepts from Vanessa Place and Rob Fitterman’s Notes on Conceptualisms (Ugly Duckling Presse, 2009). But I do not intend to map their analysis onto Yépez’s work. Rather, my aim is to signal descriptive correspondences between these respective aesthetic accounts, which engage concomitant politico-aesthetic problems with varying degrees of commitment and urgency.

3. Of course, it would be inaccurate to say that the exponents of self-branded Conceptual writing have totally ignored the question of history. It is clear, for instance, that they maintain an interest in the question of technological advance and its impact on the history of twentieth-century art; and it is on this basis that they stake their claim to artistic relevancy: “In the 1990s, with the emergence of the Internet, as chronicled earlier, uncreative writing developed as an appropriate response for its time, combining historical permissions with powerful technology to imagine new ways of writing” (Kenneth Goldsmith, “Why Conceptual Writing? Why Now?,” in Against Expression [Evanston: Northwestern University Press, 2011], xxi).

4. Consider, for example, Kenneth Goldsmith’s remarks on the remixing opportunities afforded by digitization, delivered in conversation with Dale Smith.

5. I do not mean to suggest an unspoken affinity between Yépez’s work and the appropriative or procedural strategies that tend to dominate the landscape — and the discourse of Conceptual practice. See, most recently, his essay “El escándalo del sujeto concepto: Kenneth Goldsmith,” trans. Guillermo Parra.