A way to begin is finding a way to begin without. Writing with brown
outs and without internet on this island is to begin without access to
the etymology of the word begin. On this island you learn to live off
scraps washed up from where. The word begin is made of scraps
washed up on fishermen’s shore. The words are plastic post
apocalyptic bits: a pink child’s wallet, soda bottle wrappers, Shoe
Mart shopping bags. The scrap collector fisherman was bent over
picking through whatever could support his life and house. Things
around here begin like this — salvaging second and third things from
an unknowable life before.

When the Spaniards came, they brought cocks. They trained native
islanders to train the cocks to fight. They brought money, Santo Niño,
cholera, and their language of science that could not be translated into
native tongues. They brought a brain, a globe, and a golden future of
extraction with a pope that would keep returning for his knuckles to
be kissed by a girl who asks “why does god allow so much
prostitution in my country?” 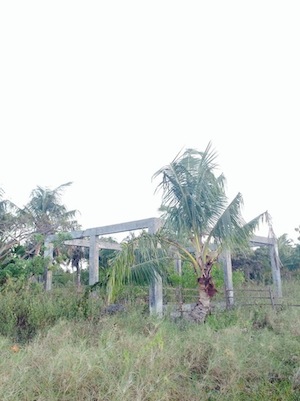 In Olango everyone and everything is hashtagless. Crab and fish
variants circulate in the wider sphere of ghostly friends and followers.
Simulacra here is useless. Everyone might be related somehow. There
are only two different kinds of beer, San Miguel and Red Horse.
There are several videoke machines and American lyrics housed in a
binder filled with individual plastic sheets to keep the fantasy clean.
Just before someone wants to become Mariah Carey, cocks crow
biblically like everyone is Peter in denial of their Lord. So deep in my
day dream but its such a sweet sweet fantasy baby.

If a life might begin with/through/because of romance (as a genre),
does it ultimately begin with empire? As visitors we witness a
succession of beginnings that depends on continuous replenishment
and repair. There is no single solution for how to build a home
resistant to salt, typhoons, and earthquakes. Like romance, there is no
single solution for how to buy and sell imaginary love. Can you
imagine a Danielle Steel narrative taking place in a matriarchal post-
apocaplytic minarchy littered with plastics, coconut trees, and a
language with no word for kitsch? 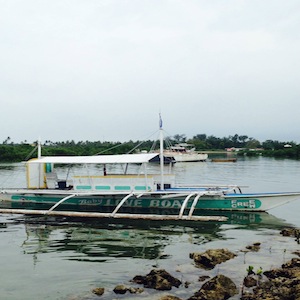 To begin to exist to others you have to create yourself to receive the
false shine of information, however true. First and last name. Email or
mobile number. New password. Birthday. Female or Male. Sign up. I
drew the internet on the sand, bottle caps for log-in buttons, starfish to
like and share. Crabs crawled out of the screen, water a natural mode
of erasure. Of course this never happened but it’s like so easy to do.

At the height of night, something circles outside of time, dogs and
cocks screaming. Wind the shape of angry wind. There must be
another way of putting it, not exactly bolo knives. You leave the
bathroom light on so the ghosts won’t come to wake you. At least
one’s already there in the room but you pretend you’re better than it.
There’s some kind of telephone in your chest and you call on the
Virgin Mary who might as well be a fair skinned Maria Clara, a
whitening bleach soap commercial, but definitely not a barrio
girlfriend, to come help you. When she doesn’t come, you switch
back and forth between the triangulation of benevolent protectors:
US, Spanish, and pre-colonial gods. Japanese gods didn’t penetrate
hard enough to make you call on them. Which one will come? Which
one will stay? Only sleep can begin to save you.

The screen was small enough to imagine actually being here. There
were no photos of this island, only a nipa hut deep in Surigao del Sur
surrounded by unrecognizable hues of green. On this mangrove
beach, there’s a white raft that could become a façade of a house.
Local children play house on it. Who knows what they imagine. But
without façades, in what direction would paranoia go? Would it go
back home or to a grave? Between the screen and raft is a kind of
heterotopia — not entirely elsewhere nor here too.

A village shares a portable videoke machine. You must slip pesos into
the coin slot to turn it on. You must pay to partake in a journey of
culturally specific repetition and mimicry. No one can tell you which
song to sing, only you can choose which one to lend yourself to. Like
your Filipino father, you give yourself over to a distant yet present
empire: Frank Sinatra, Elvis Presley, The Beatles. (Mimi)cry is also
an intimate relation to an object, one step removed from becoming
that object. This is why impersonators are so powerful; they get to
marvel in the space between relation and becoming. Their becoming
is continuous and meant to never be fulfilled which is why the
machine is full of money.

Press 0 to speak to a customer service agent. You are caller number 2,
therefore, forced to get lost in Für Elise. As you look beyond the half
open window slats, the stupid notes carry you into a hallucination of
bleach white wigs copy and pasted over barrio kids running around a
mangrove. Someone with a neutral accent politely asks what your
technical problem is. You begin to forget what the problem was. Was
it about data roaming on a tropical suburban tourist island, was it
about data charges for photo uploads on instagram? You begin to hear
the neutral accent of millions of voices spread across a thousand call
centers in the Philippines. In trying to remember why you called in
the first place, the neutral accent asks how they can assist you. You
begin to sense that neutrality is a polite way of meaning assimilation.
The question of why anyone would want to sound like you ultimately
points toward a skill set, therefore, a wage. That someone might need
to sound like you is merely a means of survival.

Here there are no communication machines no “assist relations”
between family and friends but there’s a sari sari store filled with
decades old computers and television sets. Media relics undergo slow
and continuous makeovers to unknown ends. Cognitive enslavement
hasn’t begun. Reflected from the dim and lifeless screens are young
men hammering local trees into boats and those boats will have blue
painted windows to imitate a reflection of the sky or sea. 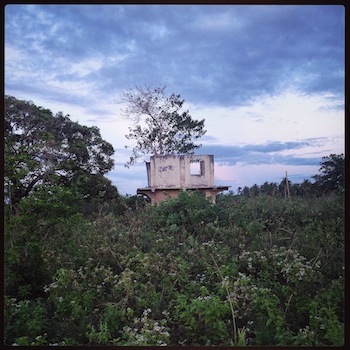 What happens to the code of beheadings or dick pics that have been
scrubbed into nothing? Does it disappear forever or take up space in
the mind of content moderators? Here is one kind of emotional labor.
Here is a different kind of erasure. Human invisibility in the
Philippines is a requisite for the production and flow of palatable
images on US screens. Eat your green beans, it’s good for you. Finish
your rice, it’s a sin to waste food.

What they brought was a holy child or infant. After all, a child or
infant could mean no harm. The twelve inch figure from Belgium was
code for empire; the child armed in a velvet robe holding a gold globe
in its left hand and right hand raised in benediction as if to say “you
can be saved by the monarchy if you let us destroy you.” The tiny
figure just kept multiplying from Prague and reached the Visayas.
Just imagine Humaway, after being crowned queen, receiving this
most sacred code meant to annihilate; a ticking bomb that would keep
exploding for the next several hundred years in the form of feast days
or quietly in the mind. 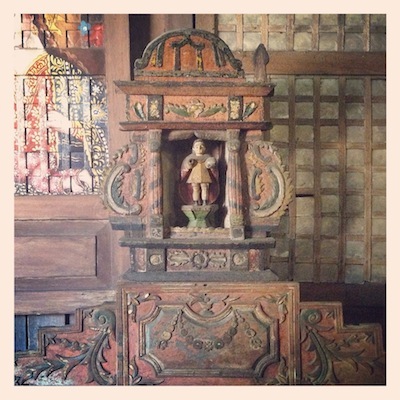 They went to an underground river tour in Palawan to feel some finite
darkness inside the earth. The feeling could be rented for 45 minutes
with strangers. As the plastic orange canoe moved further into
absolute darkness, the remnants of capitalism stayed bright outside.
The underpaid tour guide yelled from the back of the canoe and
pointed out concrete projections as a way of communicating with the
tourists; the ability to be relatable as a banana leaf motif of emotional
labor. Stalactites and guano accumulated into bratty amorphous
figures that resembled a food market, cathedral, movie star, hot dogs,
Pegasus. Regardless of how far into the darkness they went, an
audience remained inside them, wondering if they got their money’s
worth. When they returned to their Airbnb, they read philosophy and
watched The Butler and Julia & Julie from the dvd library. “The
thinking mind […] is that work which produces reality, that is to say
work as projection” summed up the underground river perfectly.

Like any beautiful self-similar pattern, the young Filipina held hands
with a much older white man. For generations of Spanish and
American empire, their relationship resembled a Koch snowflake.
There’s no snow in the Philippines but infinite iterations of this type
of always oppressive relationship rich with gray areas.

Note: The complete document from which this piece is taken is a collaboration with Ben Segal forthcoming from Urgeruge Books. Photos taken in Cebu, Philippines, by Feliz Lucia Molina.