If, as Miranda July messaged, “texting is tacky,” “calling is awkward,” and “email is old,” then Snapchat, insofar as Irish composer Jennifer Walshe’s Milker Corporation has come to utilize its API, is tasteful, adroit, and original.

Doggedly conceptual, impishly ephemeral, hers is an MMS all so simple:

A few times a week thereafter, you, too, will be treated not to duck-faced selfies, hackneyed memetics or the dreaded #foodporn, but instead a curiously curated image oft overridden with more than thirty-one characters in Snapchat’s Stanford white font (e.g. “Envelop everything in a crinkly mist [PANTONE 13-1904]”).

Seven seconds later, with a havoc Fluxus only dreamed of, that message will self-destruct.

Lest you worry about privacy or bots, Milker Corp’s terms of use solemnly swear “your username and contact information will never be shared with anyone,” and all communiqués, however “fleeting or evaporating” will be snapped by Walshe, herself. Should you no longer wish to receive a transmission like “ABSOLUTE SHIT SHOW OF WANKY SOLOS,” simply remove “milker_corp” from your friend list and “move through your life with our best wishes.”

Of course, as Wired’s Clive Thompson duly noted: screenshot, or it didn’t happen. To wit, live from Milker’s Department of Text Scores, Thought Experiments, and Mind Events, without further e-do, here’s “In a way it’s all New Age music.” 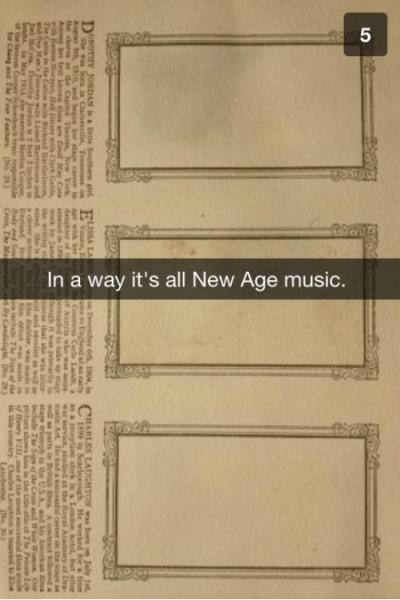 Or, should you prefer the landscape mode (with even less time remaining in the upper quadrant), here is Jennifer Walshe’s smartphone score for “The volume is right when the saxophone is BEHIND YOU.” 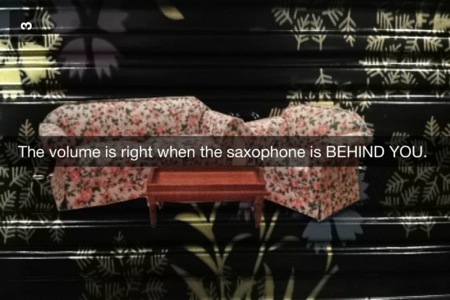 Vis-à-vis, the only proof, via pixels, it ever existed at all.

Like any startup worth its angels, Walshe’s fifty-odd snaps so far do have a catchy name: THMOTES. Unlike those applications gone to market, though, that name’s origin story is the stuff of legend.

According to Éireann lore, Thingmote was a terraced earthen mound about forty feet high, some 240 feet round where the occupying Norsemen gathered for every manner of parliamentary procedure. Bereft of any material evidence in either nation’s contemporary record, on fiat alone, Thingmote stood adjacent to the Normans’ Dubh Linn Castle on the River Poitéal (across from the Suffolk Street branch of present-day Ulster Bank).

Shouting all CAPS, Walshe’s THMOTES is both elided tribute and app d’art.

OK, if you’re any bit skeptical, well, you most certainly should be. After all, Jennifer Walshe has her own history, colorful and caustic, of making things up.

Be it her nine alter egos of Grúpat or the brand new, 100 percent apocryphal tome and site for Historical Documents of the Irish Avant-Garde, Walshe’s fantasized and fetishized accounts of an Emerald Isle that never was — a five-sixths republic her London expatriation suggests may never be — evoke the same kind of uncreative ennui that’s innate to something as inane as Snapchat.

Case in point: Walshe remains nonplussed regarding scale and churn.

“I don’t care what people do with them,” she told the Wire’s Louise Gray. “The scores don’t need to be realized — they just exist, like a hybrid encounter between it and an experience in your head.”[1]

With but a scant few precedents, were it not for maximal THMOTES like “DEAFENING VISUAL NOISE,” one might read inspiration from the text scores of Walshe’s teacher, Michael Pisaro — if not the hushed whole of the Wandelweisers proper.

More in line with Jenny’s kind of pith, I can’t help but swipe a snap such as “Countess of Lumber/Lick My Face #12tone #seashanty” as the logical, third-screen extension of Karlheinz Stockhausen’s “intuitive music” of the early ’70s. Save for tongue and the feminine gaze underneath (i.e. those two hashtags rest atop an unidentified starlet’s eyes), is “Countess of Lumber …” really that far removed from the fourteen words of “UNBEGRENZT,” Stockhausen’s defining text of Aus den sieben Tagen? 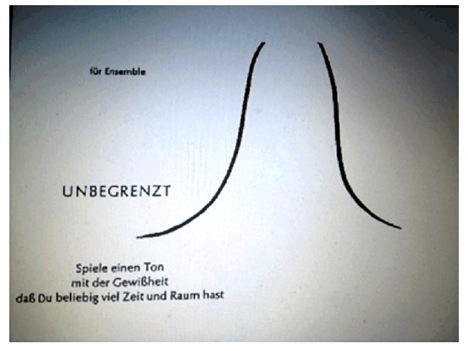 As the sage of Kürten explains: “You don’t need to think when [UNLIMITED] is finished, or whether anybody is listening or not: You don’t care whether you die in the meantime, or if the sound may be too long for you to finish playing, or if the space you need is greater than the hall, or your instrument, or [what] your own body can contain.”[2]

More metaphysical, maybe, but if that couldn’t be the program note to a would-be THMOTE, then, together, Jennifer Walshe and Japanese sound poet Tomomi Adachi are not exploring concepts of THOMTES UNLIMITED with their duo, People’s United Telepathic Improvisation Front.

“For me,” Walshe confesses, “text scores are like sci-fi or Borges stories or Heston Blumenthal cookbooks. These are texts that can be bonkers, but they’re also speculative pieces.” And while we’ll argue the merits of more Jorge L. Borges, indeed, no one’s wont to see another multi-sensory recipe from Blumenthal, OBE.

More conceptually apropos, just as you’ll never actually own a signed, first edition of Yoko Ono’s Grapefruit, alas, we can’t even hold a facsimile of the rep from Milker’s collected snaps.

Not that I’d ever trust an urtext THMOTES from one Jenny Walshe, anyways.