Frustrated by debates over Conceptualism v. “Other,” I’m hoping, in this small space, to swerve and focus on what is, to me, a more daunting divide in contemporary experimental writing: that between Empathic and Apathetic art. These are notes towards locating a gradation within US-based writing, art, and performance that points towards what’s at stake in literary practice. My hope is that by attending to the affectivity of formal qualities in texts, we might not only spotlight insensitivity and bigotry in art but also move on to the urgency of other types of work, arising from embodied rage, empowerment, visibility, recuperation, healing, and awe.

1. Apathetic art is art, but with an ulterior motive: to seem smart.

2. Empathetic art is art, but with an ulterior motive: to feel real.

3. Apathetic art prioritizes the mind during a bodywide blackout; forgets where language begins; pushes aside what language extends; assumes a whitewash as proving grounds for intellect: mastery/expertise/power/career/…/…

4. Empathetic art adores ways of knowing outside of logic and reason-based discourses; recognizes the body as the center of affect; the body as marked: racialized/queered/classed/gendered/[dis]abled/[un]sexed/[non]citizened/…/…

5. Apathetic art relies on gimmick as a crutch to hold up its anemic and neglected body.

6. Empathetic art uses prosody, rhythm, and cadence to invigorate the body, especially those weakened by centuries of cultural malnutrition and disease.

[Aside: On April 17, 2009, instead of attending the Conceptualism vs. Flarf summit at the Whitney Museum, I drank tallboys with my friends on the Williamsburg Bridge — choosing empathy over apathy: 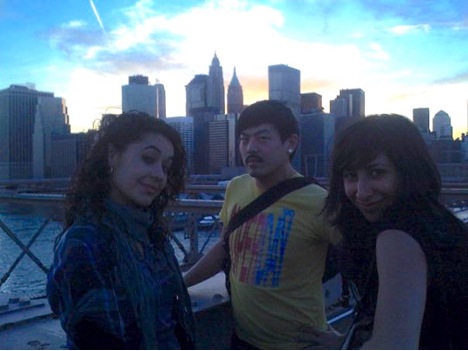 8. Empathetic art looks to communal action like MCAG as a way forward: revitalized and hopeful to break through ossified and domineering structures, bearing the brunt of substantial affective labor, even if unpaid and utterly exhausted.

9. Apathetic art dodges accountability by claiming its language is “not its own.”

10. Empathetic art knows we’re all born into language and must choose how to wield it.

11. Apathetic art cowers behind a political economy with blood on its hands.

12. Empathetic art bleeds and keeps bleeding: even if nobody tweets to make it famous.

13. Apathetic art creates a hideous community and blames the community for its hideousness.

14. Empathetic art is not afraid to be alone, communing with the dead, intuition, and body memory to incubate the work to its utmost strength.

15. Apathetic art forgets who the enemy is, and in self-induced aphasia, becomes complicit with it.

16. Empathetic art hangs a portrait of the enemy on its wall, memorizing its features as a daily exercise.

17. Apathetic art turns sexism/racism/homophobia into “art” and says, “the Internet made me do it!”

19. Apathetic art does not take into consideration the very real destruction of the earth and all its life-sustaining efforts, utilizing natural resources disrespectfully, unnecessarily, and exorbitantly as a form of colonizing self-entitlement.

20. Empathetic art acknowledges and reveres the earth via rituals of respect and recuperation.

21. Apathetic art looks to Andy Warhol for precedence: a way to proceed, seeing his use and subsequent discard of queer, trans, colored, and female bodies as permission to do likewise.

22. Empathetic art looks to James Baldwin for precedence: a way to proceed, insisting on re-negotiating dominant forms of discourse, implicating the body of the artist as the site of that negotiation: not afraid to bring up anathema notions of “integrity” and “hope.”

24. Empathetic art knows there is no last word. It will always ask for help as well as defer to another who has said it better — in humility to our elders:

Increasingly, poets have been concerned with exploring and transforming human relations to plant and animal life, while resisting human exceptionalism and attempting to escape or minimize anthropocentrism; their practice aligns with posthumanist investigations across the environmental humanities into the manifestations among more-than-human beings of powers of mind and consciousness once thought to be distinctively human.

Recent ecopoetics has demonstrated considerable interest in what Joan Retallack speaks of as “reinvestigat[ing] our species’ relation to other inhabitants of the fragile and finite territory our species named, claimed, exploited, sentimentalized, and aggrandized as ‘our world.’”[1] Increasingly, poets have been concerned with exploring and transforming human relations to plant and animal life, while resisting human exceptionalism and attempting to escape or minimize anthropocentrism; their practice aligns with posthumanist investigations across the environmental humanities