What's in the mags?

It’s not that easy to keep a literary magazine going in New Zealand. Longevity is, of course, not always the point of such projects. Sometimes a journal – Oriflamme (1939-42), Morepork (1979-80), AND (1983-85), the pander (1997-99) achieves its aims in a few issues, and can then be safely consigned to the library shelves – or the backrooms of secondhand bookshops.

More often, though, they fall by the wayside due to diminishing enthusiasm on the part of the editors, or (even more frequently) inability to sustain the crippling financial burden they so often represent.

Our literature is littered with dazzling wrecks of magazines: Bravado, Evasion, Glottis, Printout, Quote Unquote, Spin, Starch  – to name just a few of those which have come and gone over the last decade or so.

That’s definitely a reason to cherish those few literary journals we have which still publish poetry – some as their principal focus, others as one concern among many. The ones that I’m personally aware of (and I fear there may be substantial gaps in the list) are as follows:

It’s the latest brief, the themed double-issue 44-45: Oceania, I’d like to talk about here. 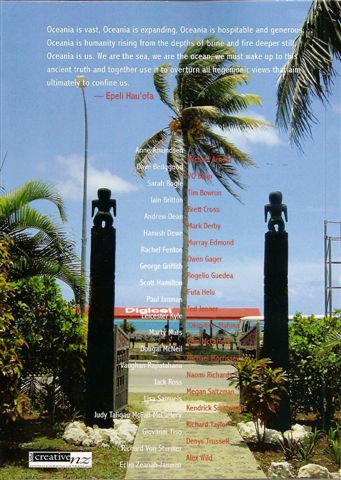 I guess the idea behind it is the strange propensity of New Zealanders – and Australasians in general – to forget that they live in the middle of the largest ocean on earth, and to ignore what we owe to the cultures scattered across that immense expanse of atolls and islands.

The editor of this issue, Scott Hamilton, is no stranger to literary controversy. His literary / political blog Reading the Maps has attracted over half a million hits since he started it in 2004, and is regularly cited as one of New Zealand’s most influential confluences of alternative opinion.

This immense double issue has all sorts of material in it: an exposition by Murray Edmond of his classic poem “Von Tempsky’s Dance,” an essay (by me) on the iconography of Antarctica, and an intricately reasoned piece (by film-maker Paul Janman) attempting to reconcile the Chinese I-Ching, or Book of Changes, with the philosophical system known as ’Atenisi realism.

And what’s ’Atenisi realism when it’s at home? Well, as I understand it, it’s an attempt to reconcile – or perhaps sidestep – the binary opposition of Platonic and Aristotelian approaches to nature in favour of a more Heraclitean approach. It was originated and espoused by the late Futa Helu, who founded the ’Atenisi (“Athens”) institute in Tonga, and who is the subject of Janman’s documentary Tongan Ark, soon to screen at the Auckland International Film Festival. 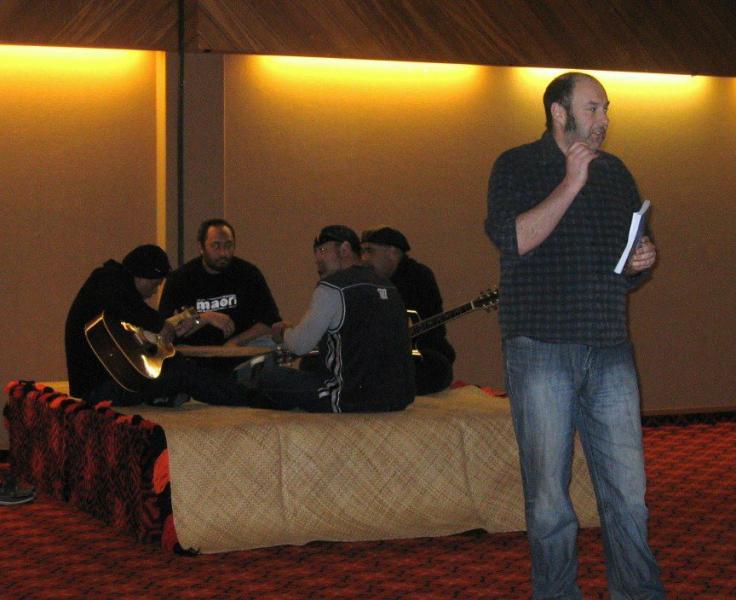 In his invitation to the launch party for the issue, Scott elaborates as follows:

As many of you will be aware, brief 44-45 features, amongst many other things, work from a number of Pasifika and palangi writers who have taught or studied at the 'Atenisi Institute, the private university founded in Tonga nearly fifty years ago by the classicist, opera singer, pro-democracy activist, and staunch advocate of intercultural exchange Futa Helu.

'Atenisi's legendary founder died in 2008, but his daughter Sisi'uno, who is the current Director of the Institute, and the American sociologist and novelist Michael Horowitz, who ran the Institute between 2008 and 2010 and has an extract from his new work of fiction in brief 44-45, will be flying from Nuku'alofa to Auckland for the launch.

Auckland-based members of the Helu family and former students of 'Atenisi will be performing a song and dance at the event, and some outtakes from Paul Janman's festival-bound feature-length documentary about 'Atenisi, Tongan Ark (tonganark.net), will be screened on a wall.

To its fans, the ’Atenisi Institute offers a set of approaches to the study of world culture which avoid stereotypical divisions between “Western” and “Polynesian” thinking. To its critics, it’s a haven for disillusioned hippies and intellectual beachcombers trying to build yet another utopia in the South Seas. One thing’s for sure – it raises hackles.

Another motive for holding the launch party at the Onehunga Workingman's Club was, in fact, to use that as a locus for collecting books for the institute. As Scott goes on to say:

Because of the poverty of most of its students and its unpopularity with Tonga's ruling elite, 'Atenisi has always lacked resources. After talking with Sisi'uno about her struggle to replenish her institution's library, which stands in a small wooden building in the middle of a swamp, I suggested that supporters of brief might be interested in donating some books for the university at the launch on the May the 26th. With Sisi'uno's agreement, I made an appeal for donations of books in a post last week on my weblog. I'm pleased to be able to report that my post has prompted numerous pledges of books, some of them from people in distant parts of New Zealand who will be unable to attend the launch, but will be posting texts for us to pass on to Sisi'uno.

That’s one of the things I like most about Scott’s issue. It’s combative, engaged: located in time and space. It’s rather funny to think that despite having run for seventeen years, with so many eminent editors and contributors, brief still doesn’t figure in the New Zealand Book Council’s list of local literary magazines.

Perhaps they’d rather it would just go away. It shows no signs of doing so just yet, though, and with a 46th issue, edited by Auckland-based Art Historian Bronwyn Lloyd, coming up later in the year. If you’d like to contribute to that, or find out more about the magazine, look for details here. 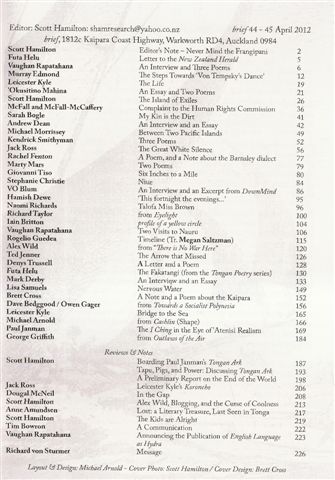