The persistence of memory

More reactions to the Short Takes on Long Poems symposium

Lisa Samuels, one of the three co-organisers of the Short Takes on Long Poems symposium (with Robert Sullivan, mentioned in my previous post,  and Michele Leggott, pictured above with her guide-dog Olive), writes in to specify that it was she who was responsible for the two words "begin anywhere" which started off our long,  collective, ten-part beach poem the other day:

Which prompts me, in turn, to claim responsibility for inscribing the four words visible in the picture above, beside Michele and Olive, which were meant to be a quote from the last line of the title poem of Allen Curnow's 1982 collection You Will Know When You Get There:

Down you go alone, so late, into the surge-black fissure.

On the surface, the poem records a walk down Lone Kauri Road to Karekare beach, where the poet intends to gather some shellfish. Figuratively, however, it seems to be reminding us that we’re all going to be taking a long walk on a short pier one of these days, into the "surge-black fissure" of "there" – whatever version of the afterlife we can imagine for ourselves.

You'll note that I failed to remember the correct wording of the poem, and instead wrote "blue-black fissure" (Robert did correct me, but by then it was too late to erase it and start again – wet sand is a rather unforgiving medium).

In fact all the scraps and fragments of poems I wrote on the beach that day seem to have been plagued by misprints: Curnow was only one of the many people I got wrong. After a while I began to think that the only way out was to claim it as some kind of postmodern trope: intentional incorrectitude.

Funnily enough, this matches almost perfectly with one of the papers we'd heard the day before. Susan Schultz of the University of Hawai'i-Manoa (whose own impressions of the symposium can be seen here) had shown us some videos of the very elegant thought experiment she and her two collaborators Jaimie Gusman and Evan Nagle had been conducting with George Oppen's poem "Of Being Numerous." They read out parts of the poem to "mainly friends and local residents who are not poets," and then recorded the words and concepts the listeners could remember: in some cases a lot, in one (very memorable) instance, a little girl possibly perturbed by some of the rude words being used, nothing at all.

Her paper was extremely interesting to me. It made me think at once about the long controversy over the technicalities of the oral transmission of Homer (and the apparently fathomless repertoires of traditional knowledge associated with tribal chiefs and tohungas): of the power and persistence of memory (to quote the title of Dali's iconic 1931 painting). But then, on the other hand, we have the immense lost corpus of Ancient Greek (the missing books of Sappho, the rest of Greek drama, all those plays which have not come down to us) or Anglo-Saxon literature to remind us of the fragility of such mnemonic systems.

What would I remember of the tradition if the libraries burned tomorrow? Precious little, and that contaminated by misreadings and misquotations, as the beach at Oneroa reminded me.

"Poets do not forget," I said in my first post – quoting the Italian poet Salvatore Quasimodo via a translation by NZ poet Kendrick Smithyman. But of course they do. The other day at dinner my father broke into a conversation about my mother's recent eye operation with a long anecdote about the seagulls he used to feed out of the back window of their house (he's now too frail to go out and forage for the left-over muffins and bread-rolls they were so fond of). The truth is that everyone forgets: poets, doctors (like my father), and archivists alike. My father's illness is gradually wiping out all of his memories, new and old. It won't be long before the last residue is gone: our names, his name, where he lives, who he is ... That impassioned recital of the names and attributes of his seagull friends was a Chekhovian moment – sad, and yet somehow intensely poetic at the same time. 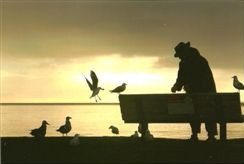 [My father feeding the birds]

Like so many Kiwi men of his generation, my father has always been a great teller of anecdotes and reciter of humorous verse (much of it composed by him). Some of them I remember myself, and no doubt my mother and my brothers could supplement my recollection with a few more. It's deeply disconcerting to witness the gradual erasure of so great an oral store though. Perhaps I should write them all down while I still can. But then where should I keep them? In a notebook? on the internet?

Which brings me round to the point I’d like to make as a reaction to all this. It’s a critical commonplace that the existence of reliable writing systems – the ability to write it all down (as Governor Grey did with the words of his traditional informants in the mid-nineteenth century) leads eventually to the erosion of formal memory training and memory systems.

The existence of the internet – a kind of immense mnemonic metaphor – has led, in its turn, to the erosion of print archives and physical memory repositories. If it’s stored online, we’re virtually absolved from reading it. It’s accessible anytime, therefore need not be looked at right now.

In his lifetime Allen Curnow (1911-2001) was generally regarded as the most distinguished and internationally recognized New Zealand poet of his generation. A brief web search will reveal to you how little of his work is available online, however. The Curnow estate – quite reasonably – sees his work as far too valuable to put up on sites where it could be copied or downloaded for free.

Kendrick Smithyman, on the other hand, far less widely read – though greatly respected – during  his lifetime, now has an immense website, co-edited by Professor Peter Simpson and Smithyman's widow Margaret Edgcumbe, devoted to his collected poems, with full cross-indexing and critical and biographical apparatus available at the click of a finger.

Despite the (alleged) “difficulty,” the mandarin complexities, of a good deal of his work, Smithyman has thus become automatically the most readily accessible of the major New Zealand poets of the last century. Whereas even the need to check my quote from “You Will Know When You Get There” required me to have a copy of Allen Curnow’s Selected Poems to hand.

What do we remember of a poem, any poem – even our own? Very little, I fear (even if she’d extended her experiment to other poets, I suspect that Susan Schultz would have found our memories for recited verse pretty sketchy): a few scraps of wording, some vague sense of atmosphere and event … The internet may delude us into imagining that we can use it as a kind of external hard-drive devoted to extra memory, and its convenience and flexibility in this regard do mean that we’ll be shifting more and more of our work onto it. Who, after all, can question the value of projects such as the online Smithyman edition?

In the end, though, any memory system or set of storage protocols is mortal: a single mind, a caste of priests, a library vault, or an engraved microchip. Osip Mandel’shtam’s widow Nadezhda kept the memory of his last poems alive by reciting them to herself and a series of helpers till the day they could be smuggled out and published in the West. The only moment in which they truly come back to life, though, is the one when we experience – read or hear – them again ourselves.