I'm taking the beach-poem at its word, and beginning anywhere. 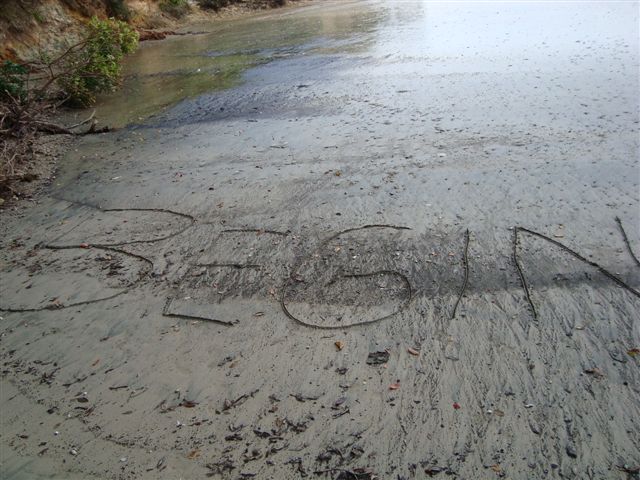 In my case, since I’m just back from the Short Takes on Long Poems symposium at the University of Auckland, I thought I might start there. 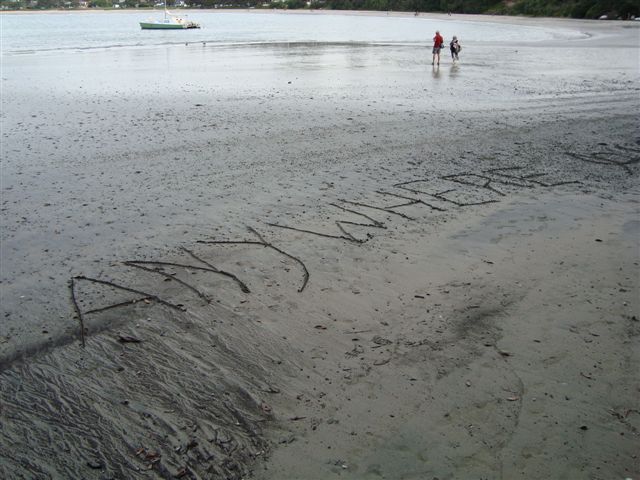 And it does seem a useful way of starting some hares of discussion we can pursue at our leisure over the next few weeks (or months).

The gathering was an international one. There were Academics and Poets from Australia, the United States, Hong Kong, Hawai'i, and other New Zealand cities. The New Zealand Electronic Poetry Centre (nzepc for short) has built up contacts in a lot of places in its decade of operations.

Last year a group of us met at Deakin University in Melbourne, the year before both in Auckland and the Technological University of Sydney. Many of those people were back in Auckland this year, but there were new faces too.

I suppose this mightn’t seem unusual in other cities or centres, but it’s still something of a radical move here, down at the bottom of the world (or the top, depending on how you flip the globe, which is, after all, still a “circle whose centre is nowhere and whose circumference is everywhere,” to quote Empedocles - though it's quite surprising to see how many other people this apothegm is attributed to ...)

The guest of honour was the distinguished American poet Rachel Blau DuPlessis, who’s been making an extended visit to Auckland over the past couple of months, and whose long poem Drafts, shortly (she told us) to be completed after 25 years of work, gave the symposium its theme.

There were, if I counted correctly, 21 papers and readings over the two days of the conference proper (Thursday 29th-Friday 30th March), as well as an appetiser of 11 readings on Wednesday night. The whole thing culminated in a ferry ride to nearby Waiheke island, at the head of Auckland harbour, where we all collaborated to construct what we fondly hope was the world's longest beach poem, running a thousand odd yards along Oneroa beach.

There were a lot of interesting conversations over the three days, a lot of comparisons of our respective  cultural locales. For me, though, one particular session outweighed all the others — not just the details of the session itself, but one particular gesture within it.

Just before Maori poet Robert Sullivan began his joint reading with local Pakeha judge and poet John Adams, he asked for the blinds of the room to be opened and for some air to be allowed in. “To let out the shades,” he explained. “There are some powerful ghosts in here.”

He meant (among others) the ghost of Nineteenth-century colonial Governor Sir George Grey, one of whose official residences this was. And it was Grey's own words that John Adams proceeded to read out, with an accompaniment of some of the Maori proverbs and songs he collected and translated for the following reason:

I found that these chiefs, either in their speeches to me, or in their letters, frequently quoted, in explanation of their views and intentions, fragments of ancient poems or proverbs, or made allusions which rested on an ancient system of mythology; and although it was clear that the most important parts of their communications were embodied in these figurative forms, the interpreters were quite at fault. […] Clearly, however, I could not, as Governor of the country, permit so close a veil to remain drawn between myself and the aged and influential chiefs, whom it was my duty to secure, and with whom it was necessary that I should hold the most unrestricted intercourse. Only one thing could, under such circumstances, be done, and that was to acquaint myself with the ancient language of the country, to collect its traditional poems and legends, to induce their priests to impart to me their mythology, and to study their proverbs.

The quote is from the preface to the book he eventually compiled, Polynesian Mythology & Ancient Traditional History of the New Zealanders as Furnished by Their Priests and Chiefs, which appeared in Maori in 1854, in a (somewhat abridged) English translation in 1855, and as a dual-text in 1885.

Grey was, on the one hand, a grim and somewhat disingenuous man, who never for a moment doubted his own superiority to and right to govern the various native races he fought and administered in various different parts of the British Empire. His explanation that he collected the myths and traditions of the “New Zealanders” in order to control them more effectively gives a somewhat chilling atmosphere to his book, still an irreplaceable  foundation text for any serious study of the subject of Maori beliefs and customs.

On the other hand, he was an intellectually voracious polyglot, whose collection of books in many languages (most of which he could speak or read) laid the foundations for the Auckland Public Library. Our poetry seminar was literally taking place in his front parlour — or perhaps it was his study, or even his reception room. In any case, his memory lingers there, along with the memories of the various Maori informants — some of them credited by him, some of them not — who recited to him the powerful texts he wrote down for their future undoing.

“Poets do not forget,” wrote the Italian poet Salvatore Quasimodo, at the end of the Second World War, as he lamented the devastation he saw all around him, “Buchenwald is there ... Stalingrad / and Minsk with its marshes and rotten snow.”

“Poets do not forget.” Actually, he wrote “I poeti non dimenticano.” The translation I'm quoting from is by New Zealand poet Kendrick Smithyman (1922-1995), who — I feel sure — meant it as much for his own people as he did as a reminder to any Italians who might read his work (published posthumously here in Auckland in 2004 as Campana to Montale: Versions from Italian, and again in a revised second edition in Novi Ligure, Italy in 2010).

I guess my running definition of any poetry is an attempt to conduct a conversation with the tradition. On Friday morning Robert Sullivan and John Adams talked for — and to — their respective ancestors. The result, to quote Robert himself, “gave me goosebumps.”

As the actual words of Grey’s informants were read out, doubled with Grey’s own brutal letters to local military commanders, his ornate prefaces to works of scholarship, I realised how meaningless this whole event would have been without them. The risk of too international a focus is a kind of bland abstraction, a lingua franca of poetics and literary theory instantly comprehensible to those of us trained in schools of poetics, but detached from the local conditions that give these concepts depth and meaning.

For me, the symposium was a success because of this single act of Sullivan (who identifies himself as being of Nga Puhi, Kai Tahu  and Irish descent) and Adams (a high-ranking member of the New Zealand judiciary as well as a poet). They acknowledged the central historical paradox that underlies our life here in these islands: the reasons why most of us here speak English as a first language instead of Maori (or French, or Spanish, or Chinese).

Most, but by no means all. The symposium touched on many cultures, languages and poetic traditions. It was enabled and made welcome in the space, though, by this gesture towards the contradictions that surround us and give us life. It was necessary for Robert to usher out the ghosts, to clear a space for himself and John, before he could begin to speak. The moment they stopped the ghosts came crowding back in, though.

I don’t think I can really write any meaningful “notes” here on New Zealand poetry without doing the same: naming the memories and the spirits, and allowing them to jostle my pen as I write. We're in this thing together, as poets of Kendrick Smithyman’s generation knew so well. Our attention to the outer world must not distract from the voices of the tangata whenua, the people of the land, all of those who were here before us and who laid down traditions for us to act within.