I suppose that the whole thing began with those mid-nineteenth century / early twentieth-century “condition-of-England” novels:  Thackeray’s Vanity Fair (1848), Dickens’s Bleak House (1853), Trollope’s The Way We Live Now (1875), Wells’s Tono-Bungay (1909), Forster’s Howards End (1910), to name just a few. These are books which quite consciously set out to diagnose the maladies of contemporary society – in the guise of fiction, but with the force of fact (their prototype and progenitor is Carlyle’s 1839 pamphlet on the "Condition of England Question" – or rather, as he himself put it, “on the poor, their rights and their wrongs”).

Joyce never wrote one – neither did Conrad. The First World War virtually wiped out the subgenre, I suspect (unless you like to see Ian McEwan’s Atonement (2001) as a kind of condition-of-England-in the-twentieth-century novel. That’s what it appears to aspire to in formal terms, at any rate …)

I’m turning fifty this year, and so it occurred to me that it might be interesting to see what New Zealand poets had had to say about our own place in the world in my birth-year, 1962. 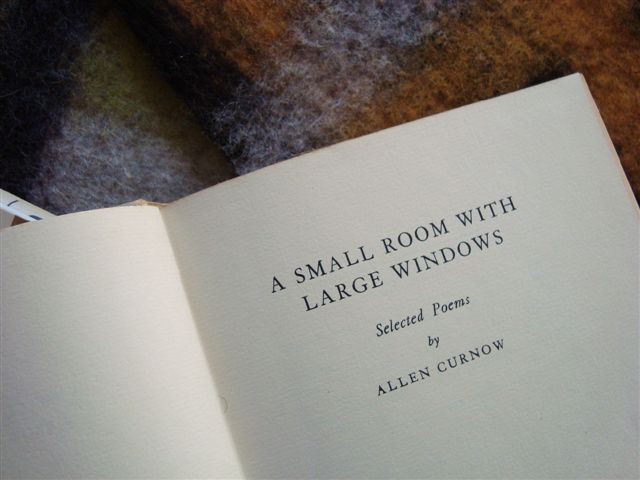 And there it was! “A Small Room with Large Windows,” the title poem in the Selected Poems published in that year by Allen Curnow, perhaps our most celebrated modern English-language poet. What’s more, he was around fifty himself when he wrote it, a little over halfway through his extremely long life (1911-2001), so it does seem  ideal.

Obviously I can’t reprint the whole poem here for copyright reasons, but I’ll do my best to quote enough of it for you to see the poet’s drift. I have discussed it in class on a number of occasions. It forms part of a course we call “Auckland Writers in their region.”

The students (for the most part) don’t get it. It requires too much explanation. It’s too drily critical of the predominant modes of thought. “What if?” it asks:

What it would look like if really there were only
One point of the compass not known illusory,
All other quarters proving nothing but quaint
Obsolete expressions of true north

Rather a strange idea, this metaphor of the fixed, unmoving compass. What would it look like if there were only one fixed truth, awe-full and inexorable? “The unwinding abiding beam from birth / To death. What a plan!”

Well, yes, we do like everyone to agree with one another here: there’s not much room for healthy dissent in New Zealand society (even less, one presumes, in the 1950s):

One way to save space and a world of trouble.

That’s part one of this four-part poem. Part two goes on to describe a particular scene: the seascape visible (one presumes) out of the window of Curnow’s own house on the shores of Auckland Harbour, the “small room with large windows” of the title:

The pine-trees are trying to stand tall in the midst of some tidal mangroves, a landscape:

half earth, half heaven,
Half land, half water, what you call a view
Strung out between the windows and the tree trunks
Below sills a world moist with new making …

The pines, clearly symbolic of some “old order” of things, are (however) under threat:

a bad bitching squall
Thrashes the old pines, has them twitching
Root and branch, rumouring a Götterdãmmerung.

For the moment, though, they’re:

Comfortable
To creak in tune, comfortable to damn
Slime-suckled mangrove for its muddy truckling
With time and tide, knotted to the vein it leeches.

The mangroves live half in, half out of water, drawing sustenance from land and sea. Their “muddy truckling” may be parasitic, ignoble, but the Götterdãmmerung, the Twilight of the Gods, will most likely pass them by – above all, they’re survivors.

“In the interim,” in part three, we move back to the general:

how the children should be educated,
Pending a decision, a question much debated
In our island realms. It being …
Out of the question merely to recognize
The whole three hundred and sixty degrees

Naturally not. Recognizing the whole 360° of possibilities would never do! Provincial societies are, after all, distinguished by the fanatical zeal with which they try to enforce conformity, convinced (or trying to pretend that they’re convinced) of the transcendent merits of their own institutions. So

It is necessary to avail oneself of aids
Like the Bible or no Bible, free swimming tuition,
Art, sex, no sex and so on.

“Not to direct / So much as to normalize [my emphasis] personality, protect / From all hazards of climate, parentage, diet, / Whatever it is exists.” Curnow has put his finger on the fear that motivates such schemes of societal self-improvement, the need to guard against “whatever it is exists”

While, on the quiet,
it is understood there is a judgement preparing
Which finds the compass totally without bearing
And the present course correct beyond a doubt …

Part four returns us to the particular – again to the view (what we “call a view,” at any rate) out of those “large windows” in the “small room” of our "truckling" culture. They’re among the most famous lines he ever wrote:

A kingfisher’s naked arc alight
Upon a dead stick. In the mud
A scarlet geranium wild on a wet bank
A man stepping it out in the near distance
With a dog and a bag

Some wiseacre took it upon himself at the time to write a letter to the paper pointing out that Curnow was wrong about that “scarlet geranium wild on a wet bank.” He said that geraniums don’t grow in the wild, and that this was therefore a poeticism, not a factual possibility. Curnow wrote back to say that he was “rooted in the particular. From where I am sitting I can see a scarlet geranium growing wild on a wet bank.”

It may be unusual, he was saying, but it is exact: he was describing precisely what he saw (as he was in the rest of the poem, by implication). I don’t think that it would have troubled him unduly if you’d disputed his view of the dullness and conformity of the small room our “island realm” has confined itself to. Criticizing the accuracy of his description, though, was another matter. Facts, the essence of things, were to him paramount, perhaps because of the fanciful reputation of “poetry” as a form.

And finally, this geranium, that man with a dog and a bag, together with:

a gannet impacting
Explode a dozen diverse dullnesses
Like a burst of accurate fire.

It’s only through that precision of image that we can begin to make the best of our “large windows” here, cleansing our Blakean “doors of perception,” seeing things “as they are, infinite.”

There’s a lot going on in Curnow’s poem, as it moves expertly from general to particular in form, from satirical to celebratory in tone. It balances his usual preoccupation with the next world (he trained for the Anglican priesthood as a young man) with his addiction to precision and provable facts (instead he became a newspaper journalist).

This piece, this whole book, written in the middle of his journey, shows as much hope as it does disdain for the “way we live now” – we’re a little frightened, still, by the view out those windows. They are, after all, so terribly large, so potentially threatening to our head-in-the-sand, Ostrich (Moa?) culture.

There really is so little of interest in the “small room” we’ve confined ourselves to so far, though. Time to walk out of Plato’s cave – time to see the reality of what we’ve been debating so long in shadow form. 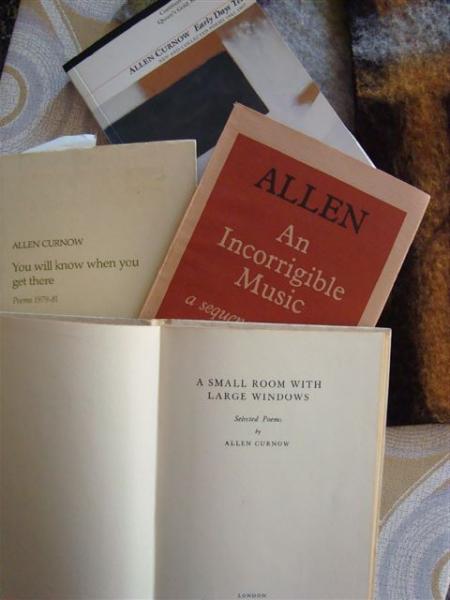