Jacket 17 is perhaps my favorite among all the forty glittering habiliments; exploring a dozen aspects of fakery and forgery, which one distinguished contributor identifies as the very heart of poetry. The jewel in the crown of Jacket 17 is the Ern Malley hoax of 1943: it inspired Ashbery as a young man, and opened the world’s eyelids to the dark energy from the bottom of the planet. Here it is, in relentless detail:
Faking Literature: Patrick Herron: Ken Ruthven’s Faking Literature (and Ern Malley)
Faking Literature: The Bibliography Ken Ruthven: — 25 pages of rare and hard-to-find source materials (including Ern Malley)
Girls on the Run: Michael Leddy: Lives and Art: John Ashbery and Henry Darger (and Ern Malley)
John Ashbery and John Kinsella and John Tranter (and Ern Malley) — ‘The Ern Malley poems’

Max Harris — Introduction [his original Introduction to the Ern Malley poems in Angry Penguins magazine, Autumn 1944]
Ern Malley — The Complete Poems
Ern Malley’s recently discovered Last Will and Testament
Max Harris — Two pieces [immediately following the Ern Malley poems in Angry Penguins magazine, Autumn 1944]
David Lehman — A Note on Harold Stewart [written after a visit with ‘Uncle Harold’ Stewart in Kyoto in 1990]
John Thompson — The Ern Malley Story: audio — the 1-hour radio documentary in RealAudio, with the voices of all those involved in the hoax, made by the Australian Broadcasting Commission in 1959. You can download the free basic model of the RealAudio plug-in for your browser here: http://www.real.com/
John Thompson — The Ern Malley Story: transcript — the full transcript of the radio documentary above; first published as an Appendix to Clement Semmler, For the Uncanny Man — Essays, Mainly Literary, 1963.
Press Clippings from 1944
FACT, 18 (?) June 1944: Ern Malley, the great poet, or the greatest hoax?
FACT, 25 June 1944: Ern Malley, Poet of Debunk: full story
from the two authors (with McAuley and Stewart photos)
The Herald, 4 July 1944: ‘Nearly Bad Enough to be Genuine’
...with McAuley photo and reader's letter.
The Herald, 4 July 1944 — The Case of The Angry Penguins
Ern Malley’s Doctor of Oxometry degree (FACT magazine, 1944)
FACT’S London News Bureau, 9 July 1944 — English comment on Ern Malley
Sydney Morning Herald, 15 July 1944 — FEATHERS FLY!
The Bulletin ‘Red Page’, 19 July 1944 — ‘Hoaxed Penguins’
Unknown print source, 1944 — [a summary of the hoax]
The (Melbourne) Age, 4 November 1944 (a notice of The Darkening Ecliptic)
Voices magazine (Vermont, USA): Contents page, Number 118, Summer 1944
Max Harris: ‘Commentary on Australian Poetry’, from Voices magazine, Number 118, Summer 1944
Michael Ackland — Damaged Men — ‘...one day it will be irrefutably proved that James McAuley and Harold Stewart were really figments of the imagination of the real-life Ern Malley and in fact never existed! ’ — a 50-page excerpt from the book about the brilliant hoaxers who created Ern Malley. 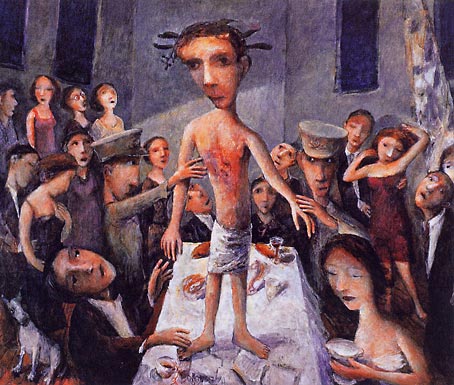 "The Apotheosis of Ern Malley," by Gary Shead, circa 2001. Reproduced with the kind permission of the artist. The two figures in army uniform represent Harold Stewart and James McAuley.

“I have found that people who go into parks at night go there for immoral purposes. My exper as police officer might under certn circs., tinge my apprecn of literature.”
The court typist’s transcript, in full, of the trial of Max Harris, an editor of Angry Penguins magazine, for the offence of publishing indecent advertisements. The trial was held in the Adelaide Police Court in September 1944. Mr Harris was convicted of the offence and fined. The original has 74 typed pages. Edited by John Tranter in 2005, with emendations and notes.