From the world of Allen Ginsberg and his many friends among the Beats, from 1969 to Ginsberg’s death in 1997

From the mid-sixties on through, photographer Gordon Ball took thousands of photos of Allen Ginsberg and his many friends and colleagues: Robert Creeley, Lawrence Ferlinghetti, Gregory Corso, Peter Orlovsky, Herbert Huncke, Philip Whalen, William S. Burroughs, and many others.

“We often think of photography as an individualistic, solitary art — a single man or woman working the alchemy of a dark room, or one with a frequently small sometimes large mostly metal object that has a magical, transforming effect on others before that little ‘click’ is ever heard. We don’t usually speak of Annie Leibowitz and collaborators, of Alfred Eisenstadt and partners, of Robert Frank and co-workers in the writing of light. But much of whatever I may have managed to do in photography involves, in a variety of ways, a debt to others — and wouldn’t have been possible without them.”

Last night at St. Mark's Bookshop on 9th Street and Third Avenue in New York, Bill Morgan and Hettie Jones talked about Morgan's The Beat Atlas, about Ginsberg (a great deal), and about Kerouac and Ferlinghetti. My favorite literary photographer, Lawrence Schwartzwald, was there and took the photograph above.

That's part of a poem by Elise Cowan. Cowen, though dead more than a quarter century, is in many ways more present than many of the other so-called "Beat women." She is alive in the pages of Joyce Johnson's Minor Characters and in the memories of many of Beat survivors whom she deeply impressd with her generous friendship. Janine Pommy Vega, with whom Elise lived for a time, says, "I still think about her every day. She was the smartest person I knew." More...

Sock it to him, sweet Tito

New York Times Magazine
November 16, 1952
"This Is the Beat Generation"

A 26-year-old defines his times.

The wild boys of today are not lost. Their flushed, often scoffing, always intent faces elude the word, and it would sound phony to them. For this generation conspicuously lacks that eloquent air of bereavement which made so many of the exploits of the Lost Generation symbolic actions. Furthermore, the repeated inventory of shattered ideals, and the laments about the mud in moral currents, which so obsessed the Lost Generation does not concern young people today. They take it frighteningly for granted. They were brought up in these ruins and no longer notice them. They drink to "come down" or "get high," not to illustrate anything. Their excursions into drugs or promiscuity come out of curiosity, not disillusionment. 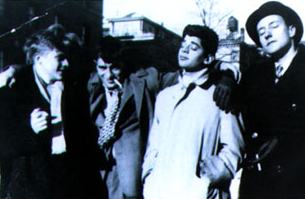 Only the most bitter among them would call their reality a nightmare and protest that they have indeed lost something, the future. But ever since they were old enough to imagine one, that has been in jeopardy anyway. The absence of personal and social values is to them, not a revelation shaking the ground beneath them, but a problem demanding a day-to-day solution. How to live seems to them much more crucial than why. And it is precisely at this point that the copywriter and the hot-rod driver meet, and their identical beatness becomes significant, for, unlike the Lost Generation, which was occupied with the loss of faith, the Beat Generation is becoming more and more occupied with the need for it. As such, it is a disturbing illustration of Voltaire's reliable old joke: "If there were no God, it would be necessary to invent Him." Not content to bemoan His absence, they are busily and haphazardly inventing totems for Him on all sides...

In the wildest hipster, making a mystique of bop, drugs and the night life, there is no desire t shatter the drugs and the night life, there is no desire to shatter the "square" society in which he lives, only to elude it. To get on a soapbox or write a manifesto would seem to him absurd.... Equally, the young Republican, though often seeming to hold up Babbitt as his culture hero, is neither vulgar nor materialistic, as Babbitt was. He conforms because he believes it Is socially practical, not necessarily virtuous. Both positions, however, are the result of more or less the same conviction -- namely that the valueless abyss of modern life is unbearable.

Sappho-Dickinson Hybrid with a Beat Sensibility

Tony Trigilio has been working this past year on an edited collection of poems and fragments from Elise Cowen's only surviving notebook. This edition will reproduce the notebook poems themselves, as they were written in Cowen's hand. Cowen's surviving family generously granted the rights to Tony to edit the book. The project, which is still looking for a publisher, will include many never-before-seen Cowen poems and will correct those that had been mis-transcribed in the past. The book is taking shape as an intriguing Sappho-Dickinson hybrid with a Beat sensibility -- an odd mixture, perhaps, but an accurate description of Cowen's varied influences.