The elephant has left the room

Jacket magazine and the Internet

This 11-page downloadable PDF file is available now on the website of JASAL at the Australian National Library. JASAL = the Journal for the Association for the Study of Australian Literature.

Australian poet John Tranter trained in all aspects of publishing, from hand-lettering to editing, from litho platemaking to screen printing, and developed an early familiarity with computers. The development of the Internet in the 1990s found him armed with a formidable array of skills. He published the first issue of the free international Internet-only magazine «Jacket» single-handed in 1997. «Jacket» quickly grew to become the most widely read and highly respected literary magazine ever published from Australia. In late 2010 John Tranter gave it to the University of Pennsylvania, where it continues to flourish. This memoir traces John Tranter’s publication of literary materials on the Internet including the technical and literary problems faced by «Jacket», and outlines the many other projects he embarked on that resulted in the Internet publication of over fifty thousand mostly Australian poems, articles, reviews, interviews and photographs.

Where I Came From

In 1973, the U.S. Defense Advanced Research Projects Agency began a research program to link packet networks of various kinds, aiming to develop information-exchange protocols to allow computers to interact across networks, a program that became known as the ‘Internetting project’. ‘To internet’ was a verb. What emerged over the subsequent two decades is known today as the ‘Internet’, a noun.

That year I returned to Sydney from Singapore, started work on my third book of poetry and sent in my first application for a Literature Board grant. [The Literature Board of the Australia Council was rather like the NEA; they gave out grants -- 138 grants, in their inaugural year, 1974 -- enough money to live on for a year and write poetry.] I had already travelled through Europe and Asia, abandoned a promising academic career, published two books of poetry, an anthology of new Australian poetry for «Poetry Australia» magazine, two issues of the aptly-named «Transit New Poetry» magazine, and had written and published a small hoax magazine printed on a Gestetner rotary silk-screen machine titled «Free Grass».

I learned lettering and design in the early 1960s and photo-litho printing in the late 1960s, and when my wife bought a typesetting agency in the 1970s I learned to use the computerised photo-typesetting equipment that came with it [see photo below]. And in the 1970s I designed and printed silk-screen posters for rock bands to make money.

Growing up on a farm, I had learned to fix machinery – farmers had to – so computer technology was little more than an interesting challenge to me. My training in English literature, art, design, photography and typesetting all converged on book and magazine publication, which computers had so recently made relatively cheap. 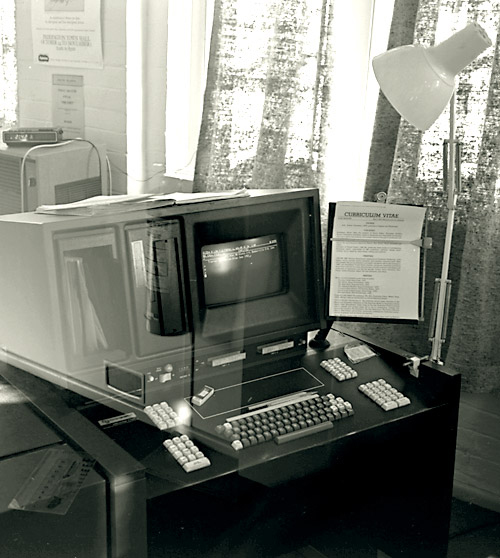 Photo above: Compugraphic typesetter, Sydney, circa 1980

My first two poetry books were typeset in metal type, as was common in the 1950s and 60s. But the 1960s saw a move to lighter, cheaper and cleaner typesetting machines – fancy typewriters, initially – and the move from metal type to cheap and ubiquitous photo-lithographic reproduction led to a flood of little magazines and schools of poets. That was a significant shift in print technology, and made print production much more widely available.

But this shift didn’t solve distribution – getting the material into the hands of its readers. You can solve all the other problems, but that one is intractable. Or it was, until the Internet.

What Was «Jacket» Magazine?

The Internet has changed everything; in particular it has made the creation, research, supply, publication, discussion and academic study of poetry inexpensive, voluminous, and widespread.

People compare the impact of the Internet with the impact of Gutenberg’s movable-type printing press around the middle of the fifteenth century. This is mistaken; in the few decades it has been with us, the Internet has created more important changes throughout the entire world, more deeply and far more quickly, than the invention of printed books has done over five hundred years.

The history of «Jacket» magazine makes up an informative case study, within the limited realm of writing and literature, of what can be done and how best it can be done with this new research and publishing tool.

[More: You can download (offsite) and read all of this free eleven-page PDF article here.]