It’s good to see Jacket2 continuing to focus on the poetry of Barbara Guest, a forceful writer of uncompromisingly modern tastes.
I am pleased to say that at a reading for Carl Rakosi in San Francisco some years ago (where Carl read  his short poem “The Laboratory Rat”) I was able to meet Barbara Guest. I mentioned that Allen Ginsberg once lived on the same street as she did, in Berkeley, at the time he wrote “A Supermarket in California”.
“Well, it’s a very long avenue,” she replied sweetly. “I think Allen lived somewhere on the downtown end.”
Her work has featured in Jacket magazine many times. To read these pieces, click on the links below: 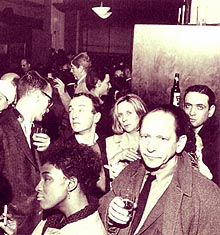 In July 2007 Kathleen Fraser interviewed Hadley Guest about Barbara Guest, her life and her writing, for an audio recording. Links to the items below are on Jacket2 at this page.