This recording is being made availabe in conjunction with the publication of the libretto by Summerstock. 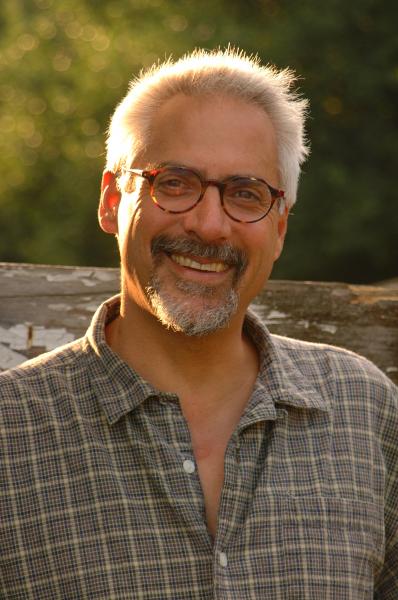 Café Buffé is a one-act comic opera: an existential foray into food and food service. Set in a café/restaurant/bar, the cast consists of a waiter and several patrons. They discuss the menu, order food and each character tells his/her own absurdist story. The libretto is replete with nonsequitors, plays on words, hyperbole, and farce — all interlaced with a series of often bluesy songs.  The eighteen musicians — who play a mixture of conventional, electronic, Harry Partch and Dean Drummond instruments — are onstage throughout. They are the cafés house band — and they demand — and are served — ice cold water.  Everyone's voices are brought together at once for a grand finale.

Café Buffé was formally initiated in 1991, when I invited Charles Bernstein (who I knew as a fellow Upper West Side preschool parent) to create a comic farce about food.  My idea was that it would be set in a café in which my microtonal ensemble Newband, performing on the Newband/Harry Partch Instrumentarium, would be the accompanying orchestra in the form of an on stage café house band. Very importantly, Charles and I were agreed that I would make every attempt to set the text so that all words would be clearly understood.

Café Buffé is my first opera, but hopefully the first of several to be composed in the next decade or so.  It is also something I have been pondering for a long time. As I see it, I am someone who set out to compose operas, but who got sidetracked into microtonality, building instruments and directing a chamber ensemble to perform my microtonal chamber music.   For me this has been a large learning curve because I needed to develop a personal musical language (which happens to be microtonal) before composing an opera. Even after Charles created his text I needed to compose Congressional Record to develop an approach to setting text and The Last Laugh (a work for live ensemble and silent film) to develop an approach to mixing music with another medium.

I also have to credit and thank my first conducting teacher, Hans Baer at University of Southern California, for warning me not to conduct my own music (because composers always drag the tempo in their own music) and not to try to compose a comic opera before composing numerous tragedies (because it's almost impossible to compose a good comic opera).   I have been conducting my own music for many years, and when I drag the tempo, I am fortunate enough to have musician/friends who tell me.    Hans Baer's explanation, that Wagner and Verdi waited to compose Die Meistersinger von Nürnberg and Falstaff respectively, was futile.  Perhaps I am merely a product of my time, growing up with movies and TV, but for me, opera is an absurd medium by definition.  I am only interested in composing comic operas.

Inside the Café Buffé B early 21st century.  The band should be set up like a dance band with cardboard music stands with the name of the band in the front row.  Various tables are set about, spaciously to allow much eventual movement. Later, the delivery of water to the band and food and beverages to patrons should be very exaggerated, almost gaudy, an oversized beverage cart with gleaming water goblets, gigantic portions, etc. All waiters/waitressess, busboys/busgirls are dancers or movement artists, extremely exaggerated in motion. The band itself should always be active when not playing: eating drinking, fiddling around, an occasional prank.

The band begins to play the overture while Bill Pell, a waiter, is quietly setting up. Meanwhile, Meadow Lark sips a cold drink at a table.When the band quiets down, Bill asks Meadow what she thought of the band: "Whaddya think of that?" "That what?," sings Meadow. "That band." "What band?"" "The band." " Which band?" " This band" " Band of what?"  Bill and Meadow continue until the Band interrupts (singing loudly): "We sure want some ice‑cold water!" — and an elaborate water service is provide to the Band.

Bill and Meadow begin to discuss menu options. Meadow asks "How's the tofu?" Bill sings "Not so good today, I'd suggest frogs legs." After much back and forth: "Tripe's all right. Sprouts with tripe it'll be."  Now that the food is settled, Meadow asks: "What's your story?" "Got no story." "Whaddya do?" "Serve you." "Besides that?" "Wait for facts," answers Bill. A little later he explains more clearly: "I'm a waiter. Waiting for the day to end."

Bill promises to get the drinks, but before that can happen, Giles Swan and his daughter Sylvia Swan enter. Giles is fuming: "Goddamn hard drive./ Can't believe it / Four hundred bucks / Jesus fucking hard drive / Crash, crashed."  Sylvia and Bill discuss the menu, but Giles is too upset to eat.  He continues: "My data's gone / But my tears are here to stay / My data's wiped / But my fears won't even stray / Got a 380 processor / Gonna blow these cares away."  He ends "I stare into the void. / And don't know who to thank."

Bill asks the band what they think, and once again they demand water. Giles orders a drink, but Sylvia wants to leave: "Let's split / This place is burning me up / Why do we always go to these flea bags?"  She complains for a while, ending "Whaddya say, Daddy-O.  / Let's go to the beach!" Giles is too upset for the beach and Meadow tells him "Time to relax / Listen to the band."   "What band?" asks Giles. "This band," retorts Meadow.

Giles attempts to hire the band for a party.  The Band Leader insists on cash payment. Giles asks "How about Saturday," but the Band still never got its second round of water: "Okay then no problem / Where are our drinks!./ Ice water / Ice water / We really want some / Ice cold chilly water / Ice cold chilly water."  And a second elaborate water service is delivered to the Band.

Suddenly there is another patron in the Café Buffé, Hilda Honey, who appears magically. She sings, first quietly: "It must be time / But I don't know where I am."  Hilda's is the longest song of the opera and she builds slowly in agitation until: "Now if I stopped complaining / What would I do instead. / Now if I stopped screeching / What would I do instead? / I'd give you a taste of my tuning. / And throw you out of your head." Meadow sympathizes and they sing together: "Sometimes that happens /. A chord is struck / The birds are blue / Lock is brokr / They say it's Synchronicity / Still I can't pay the rent / They say throw the towels away / How deep is deeper than bent?"

Hilda asks for cheesecake and Bill claims the Café Buffé cheesecake is "Only the best cheesecake in the world."  But that isn't all that Bill has to say: "Avocado for breakfast / Chevre for tea / My best friend's gone away / Let's have cheesecake to drink! / So don't say some cheesecake.  / Always say ideal cheese pie. / Unique cheesecake / It never lies."

When she's through, Meadow sings: "I'm twice as high as you / But I've got both feet on the floor," and together they sing: "Slowly, much too slowly / I've learned it's fun to fall." Bill interrupts,: "Got a chicken salad sandwich / For anyone who hears this call." Giles doesn't want chicken salad.  He wants ham and egg, but Bill says: "We don't have any today / Just bouillabaisse." Giles and Bill sing together: "Hot hot hot soup / Steaming hot piping / Soup suits me very well / Chicken noodle, cream and gumbo."

Everyone joins in the finale, singing in quick alternation, almost simultaneously.  Giles sings: "Cushion of shocks /  Bumps, knocks, slides." Sylvia sings: "Let's hit the waves/ Get out of here / Hey Pop — Hey Dad / Snap out of it. / Are you listening?" Bill: "Nothing like the taste of salsa and elk / Try some pimento peppered with felt."  Meadow: "This time is my third time round / Once as tailor / Once as teller / Once tailor once teller / Once sailor once / Salt cellar." Hilda: "My pie is ideal pie / Ideal pie for me / Give me cheesecake / Good old cheese pie / Until I die. / Until I die."  During the finale, Hilda disappears as magically as she arrived.

Sylvia gets in the last word with one last "Are you listening?"

Dean Drummond's composition was sommissioned by Mary Flagler Cary Trust, New York State Council on the Arts and National Endowment for the Arts