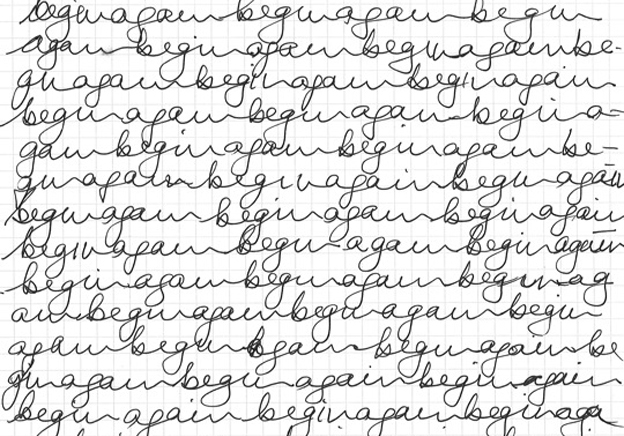 Begin again: that was the advice of the Benedictine monk John Main, founder of the Christian silent meditation movement in the West, to those who found themselves floundering in their commitment to the daily task of meditating. It is an idea that is strangely comforting — to begin again — in all the contradictory impulses of that phrase, for a beginning is new in its never-been-here-before quality and resists the idea of repetition nestled at the heart of again. But that is what we must do in the face of the tsunami of the attacks bearing down on all those committed to a fair and equitable society — begin again and again and again

As I write this, I am looking back to the fall of 2016. The day after the presidential election I was traveling to Providence, Rhode Island, to participate in a memorial for the poet C. D. Wright. I remember the flagrant disbelief in the air. In train stations strangers spontaneously conversed. A woman sat down beside me and immediately began talking about the election. We looked deeply into each other’s faces, as if we knew each other. As Oana Avasilichioaei writes,

We hurled our solitudes together

Mixed with the devastation in the air, I was in mourning. I considered how angry C. D. would have been in this historical moment, and how her unflagging devotion to revelatory poetry was essential to my notion of the art. I wondered, what can poetry do now?

Please don’t forget to be human.

How can poetry help us become “us”? I think of Joan Retallack’s invitation to enter a field of linguistic histories in “The History of Being Sche: Key Word: Iridescence.”

Remembering is part of perceiving, disrupting, forging a path. How might we collectively help each other, revive each other, resuscitate this gift we call poetry, as it informs our work ahead? Julie Joosten writes:

despite history, we keep falling in love with the world.

How might we find enough safe and steady space to continue? How might we find the energy to multiply our efforts? I had mixed feelings about the march in DC. And yet I was strongly pulled to be present. My arms and hands and words were being pulled by the arms and hands and words of women I deeply admired, who set out arranging for buses, maps, and plans. I asked myself, what message do I want to bring to the march? At first I heard only a stunned inner silence. But then I remembered to listen outside myself. Brenda Hillman writes:

When I get to the Capitol, I’ll walk for women who can’t be there; some asked me to march for them and I’ll pin their names inside my coat.

I remembered the strategies of inquiry and collectivity. I remembered that we are not limited to language. Our bodies are also messages. Abigail Child writes:

Just to be clear: Flesh is my interim theory

I thought about how difficult it is to be an individual facing a fraught historical moment. In fact this is a recurring theme or preoccupation or obsession in contemporary poetics: how to move beyond singular sight. How to be with “you” and between the “you” and the “eye.” Not one “you” or “eye” but a forest of eyes. Collectivity places us where we already exist, beside and inside each other — in multiple notions of personhood, community, city, nation, and planet. This anthology is an attempt to remember collectivity. This collection is also an attempt to ask: how can we avoid boxes, strictures, the painful sense that our efforts are finite and inconsequential? Or maybe it’s more accurate to say: how can we be certain that our limitations will not preclude our necessary actions? I knew the message I wanted to bring to the march existed in all of the bodies, voices, images, and efforts of those present, those wishing to be present, those who had marched before, and those who will march in the future. Acute listening became place and catalyst.

I sought the protection and potency of art in company — mantras, emblems, scripts, and practices. I wanted to remember not only culpability, but also the potential creative energy of the body. My process for gathering Solidarity Texts: Radiant Re-Sisters included a willful negation of the harmful and violent rhetoric all around us. I wanted to spread a contagion of love, a scaffold of hands. I was in a great hurry. This ephemeral act of invitation was offered chaotically. We were all in flight.

Dear radiant re-sisters walking into the future in the year soon to be 2017:

Dear breath, dear hope, dear resistance. It’s time to prepare. We need an infusion to carry us, to accompany us, to remind us that we stand in unison, in solidarity, in one body, in many bodies, in individual voices, in a choral wave.

I will collect and assemble a PDF that can be easily circulated, recited, performed, borrowed, given, spoken, sung, staged — wherever we happen to be along the way. And maybe this will evolve into additional forms.

To frame this feature for Jacket2, five new texts were written to provide a critical contextualization of the anthology, the march, and multiple perspectives regarding protest and activist poetics.

Here is a preview:

And so we find we are not militant but in motion, a motion we can’t master. — Julie Carr

As with the plurality of forms, the plurality of voices that comprise the Solidarity Texts form a collective community, yet resist the problematic reductions and exclusions that accompany the structural unity of conventional solidarities. — Georgina Elizabeth Colby

In reading the Women’s March, its successes and failings in Philly, I think about the inheritance of “Still” and how a more conscious look to the Million Woman March might have created a different march, more reflective of Philly’s history, its black feminist history, not as an afterthought but a foundation. — Kenna O’Rourke

I am not wanting to say that intimacy, that stalls in the most affirmative way, is my way out. It is a way in. — Connie Yu

The “radiant resistance” here is not dogmatic. It carries within it contradiction, paradox, and perplexity; it offers no clear program. — Mia You

I’m grateful to all of the contributors to this anthology and feature for their tremendous contributions, and to Julia Bloch, Kenna O’Rourke, and all the editors at Jacket2.

M. NourbeSe Philip’s opening invocation to “begin again” is enormously helpful. There are many ways we seek to comprehend the full gravity of this moment, and the complex and problematic trail which has led to this moment. Simultaneously, our ability to see that “a beginning is new in its never-been-here-before quality” is an opportunity to set out again.

When I distributed the initial PDF I wrote:

This collection of texts, songs, drawings, images, movements, and sounds was assembled for the Women’s March on January 21, 2017.

These rants, yells, chants, rituals, diagrams, and scripts are for everyone marching in solidarity for women’s rights, for human rights.

These instructions, signs, and spells are for everyone in solidarity with those marching, for those who cannot march, for those who need protection, for those who are working to protect our vision, our light, bodies, our planet, the futures of our children, and our freedoms.

Enter this collective. For healing: written garments, painted candles, an invitation. To gather. To invoke. To act. To embrace.

Please carry this collection with you.

Please circulate, recite, perform, dance, borrow, give, speak, and sing, wherever you happen to be along the way.

Let us walk together along the poem-lined streets.

Below is a clickable table of contents of the creative contributions to the original Solidarity Texts: Radiant Re-Sisters PDF, followed by links to the critical essays written in response to them.

In the months following the 2016 presidential election and preceding the 2017 Women’s March, Laynie Browne curated a collection of poems, artwork, and other creative works as a means of fostering resistance. These Solidarity Texts, circulated via PDF before the January 21, 2017, march, are housed here at Jacket2 in their permutated forms. Six critical essays on the Women’s March — its problems and successes — were solicited to contextualize these creative works, and to accompany the texts in this feature.

More on Jacket2 and PennSound

Recordings by the curator and many of the contributors in this feature can be found at PennSound, including material by Laynie Browne, M. NourbeSe Philip, Julie Carr, Julie Patton, and many, many more. Visit PennSound for a full directory.