Steve Savage, S. Savage, Dessavage,  approaches language biologically, fielding the morphology of its formstructures, the physiology of syntax, the anatomy of lexicon, the behaviour of its phonology, the origin and distribution of semantics. Language at the level of the syllable and letter is recomposed into many possible DNA structures, that may grow, move, behave unpredictably. At times, syllables are synthesized to create new beings of linguistic behaviour across the lexical barriers of French and English, or even the authorial personas of S. Savage and Dessavage:

Sound and sense are the poles and measures between which Savage oscillates, inventing vocabularies, colliding meaning, removing syllables or letters in an attempt to say more with less, so that meaning may be heard entering through the ears rather than understood through its logos.

One of his projects consists of biogrammes (from bios / life and gramma / letter) which are lexical sequences composed according to the five possible modes of genetic code mutation: ablation, insertion, substitution, transposition and duplication.

Savage also oscillates between how the soundtexts he creates behave on the page and how they behave in sound. Listen to the oral rendition of “Biogramme dit dansé” (with music by Alexander MacSween and  voice by Karine Denault). Or to “Annihile hilares,” a noise music piece composed entirely from human laughter. Or to “Burroughed,” a cut-up homage to William S. Burroughs where we hear Burroughs describing his cut-up technique. 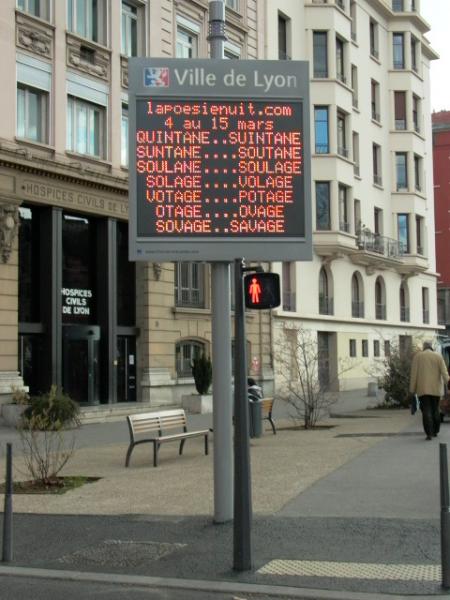 Emerging out of a background in electronic music and sound, Steve Savage translates, collaborates, intones across texts, sound and medias. Living in Montreal, he has published two books of poetry, 2 x 2 (2003) and mEat (2005) with Le Quartanier. He wrote for journals such as Liberté, Boxon and Action poétique. He has performed in several festivals such as Voix d'Amériques, the Festival de Théâtre des Amériques and Elektra. His poems have been filmed (Les Passagers and Baillat Cardell & Fils), set to music (Alexander MacSween), translated into English and Swedish (Erín Moure and Jonas (J) Magnusson) and choreographed (Karine Denault). The 2011 spring issue of Telephone was dedicated to multiple translations (from French to English) of a collaborative work between Steve Savage and Renée Gagnon.