How can we once again common a commons?

“What is your address?

and nowhere at once” (Anarchive, 71) An address, as physical location, necessarily connotes boundaries, ownership, enclosure. Land is demarcated and receives an address, a name and number, so that it can be owned, so that it can enter into an economy of production and consumption. But as you, dear Stephen Collis, through your multi-volume, on-going work, “The Barricades Project,” turn the address back into an address, into speech, into the spoken toward someone, I, among many, find myself addressed and become part of this spoken which is not enclosed, not monetarily and economically situated, and which moves. And the spoken that you evoke between us, dear Collis, is not in straight lines, it meanders land and lexicons and authors, swims in rivulets, gets tangled in brambles.

Anarchive addresses the commons throughout and thus holds a part of The Commons within it, and it also includes translations of Ramon Fernandez. Translations of Ramon Fernandez by Alfred Noyes with an afterword by Stephen Collis make up the Quixote Variations. In The Commons, signed by Stephen Collis, an introduction to “The Barricades Project,” written by Ramon Fernandez and Alfred Noyes, appears at the end of the book. So parts of every book are folded into each book, and each book propagates several subjectivities as its authors. In the Quixote Variations although Fernandez is the author per say, we receive his voice through his translator, Noyes, who in fact holds the copyright to the book, while Collis provides the afterword. A move that is reversed in The Commons, where Fernandez and Noyes get to have the last word at the end of the book as they introduce “The Barricades Project” in an “introduction” which also functions as an afterword to The Commons. Time is folded as well, for although Fernandez disappeared in 1936, he turns up in Barcelona in 2007 to collaborate with Noyes on this afterword, and since the “after” is quite complex in this instance the whole section gets called an “introduction.”

And to further fold matters, in this introduction/afterword we discover, if we hadn’t already, that throughout The Commons we have in fact meandered along with “the so-called mad peasant poet John Clare,” “the primitivist Henry David Thoreau,” the spirit of “William Wordsworth,” as well as “a host of authors of Romantic Guides and Tours.” (138-39) So the subjectivities of all these authors rise through various voicings, embodiments and gestures to fracture and shadow the surface of the page/landscape, and in so doing populate it. These acts of populating create a commons.

A commons, as Collis reminds us, “is the absence of the private. It is not collective ownership but collective use of the unowned, the unownable…” (Commons, 139) Collis’ work is not bound within one book, but extends across the physical boundaries of several books, it is work that can be said to in fact exist between books. Yes, language is unownable and thus the common of commons, yet this work makes a further claim in its foldings, which is that an “author” is also in a way unownable, that an “author” can also be a “commons.”  So Stephen Collis can write “John Clare” and Alfred Noyes can write “Stephen Collis.” And so the work folds and folds again and folds again. 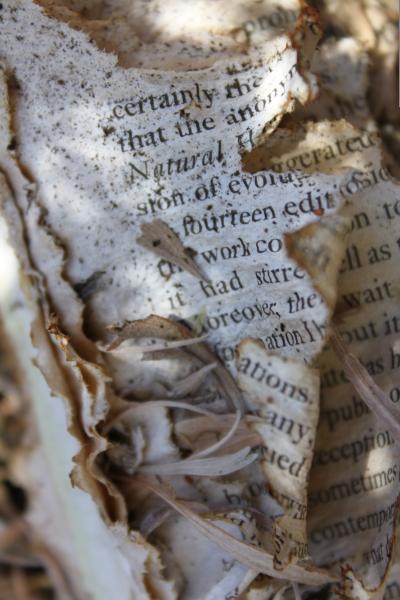 As it folds into one of Collis’ current projects, a collaboration with Jordan Scott called DECOMP. In 2009, they left 10 identical copies of Darwin's Origin of Species in five distinct BC ecosystems, and let them decay there for a year. As Collis tells us, they “were curious about the strange things many people were saying about so-called ecopoetics, so we wanted to see how different "environments" would "read" a text. True to form, each ecosystem had something different to say about Darwin's text. As far as a compositional process, we were probably more interested in "variation" than "natural selection" (we had of course engaged in some very "unnatural selection" ourselves). We were also curious about the possibilities of an "organic" conceptual poem (since conceptualism so often celebrates the machinic and technological).” 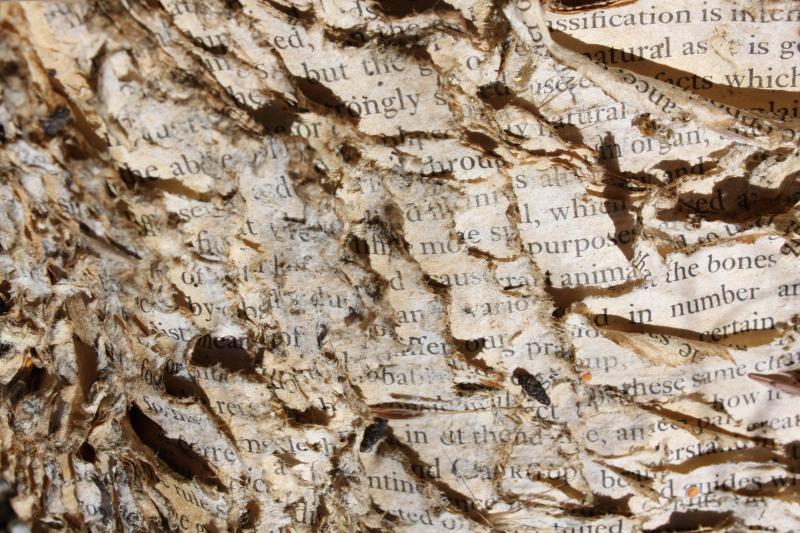 Stephen Collis is a member of the Kootenay School of Writing and lives in Vancouver, where he teaches American literature, poetry, and poetics at Simon Fraser University. His books include Anarchive (New Star, 2005) and The Commons (Talonbooks, 2008), which form parts of the on-going “Barricades Project,” and most recently On the Material (Talonbooks, 2010). In January 2011, he presented his work at "North of Invention: A Canadian Poetry Festival."

All images courtesy of Stephen Collis.