In 1974, John Taggart asked Ron Silliman to write an essay for an issue of Maps (#6 - “special Robert Duncan issue”) on the work of Duncan. Silliman chose to do a close reading of the first poems of Duncan’s Opening of the Field (1960) in which he suggested that Duncan set them out as an argument from which to mount the large, unnamed lifework that was initiated with these poems. Silliman reproduced the text of the Maps essay on his blog on December 6, 2010, a few hours before he presented on Duncan as part of the 1960 symposium at the Kelly Writers House. Duncan took a copy of the Maps essay and annotated it by hand. For Jacket2 Ron Silliman has made available reproductions of the pages of Duncan'scopy of the Maps piece, “Opening.”  We are grateful to him for permission to reproduce these.  The pages views as a whole, also with Duncan’s markings, are available as a PDF. As for the version we present just below: please click on any individual page for an enlarged view. A transcription of Duncan’s notes (produced by Gordon Faylor) can be found below the page scans. — Al Filreis & Gordon Faylor 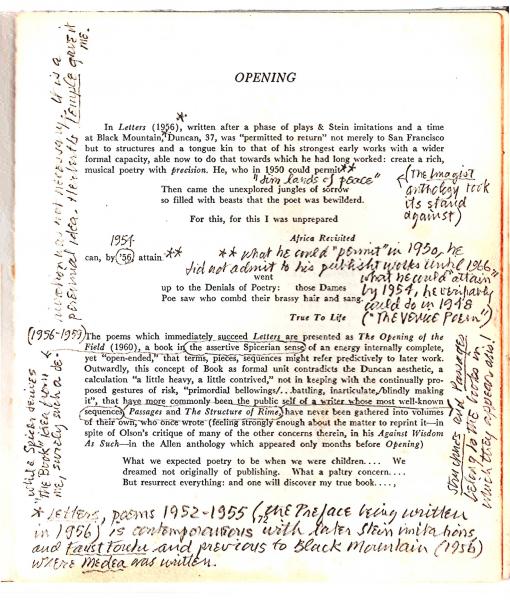 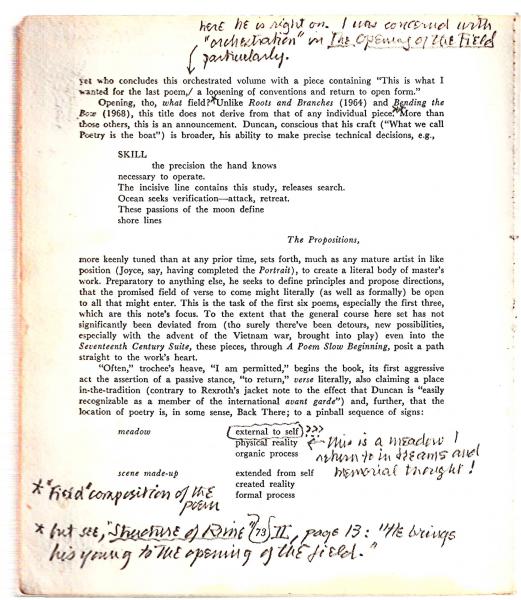 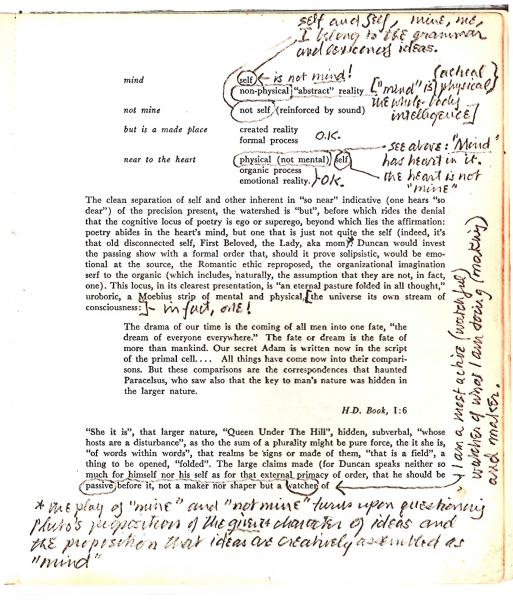 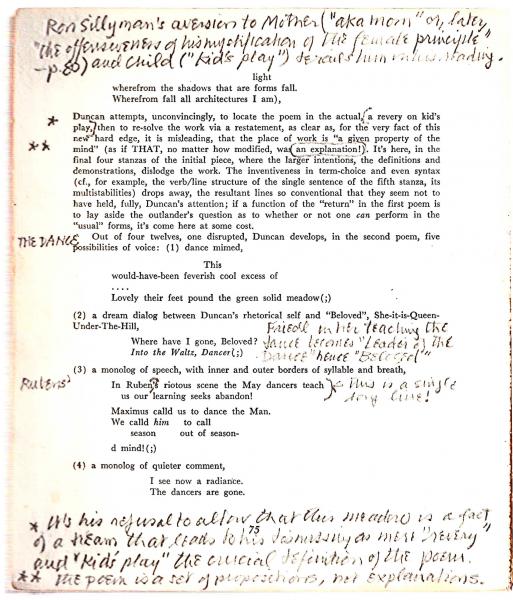 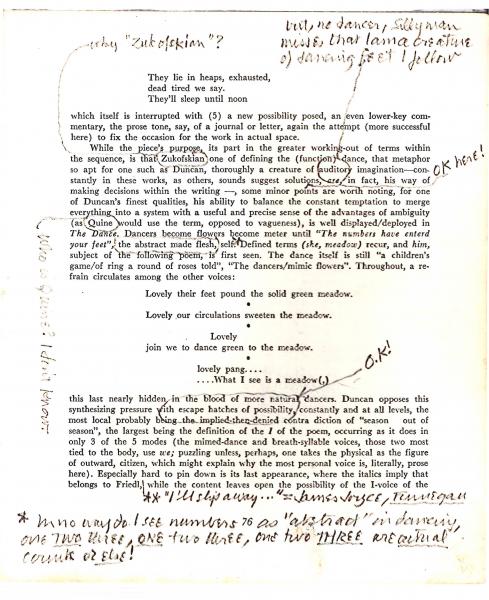 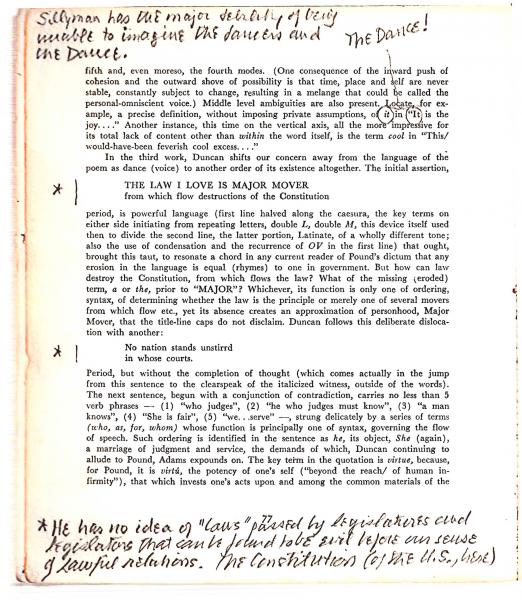 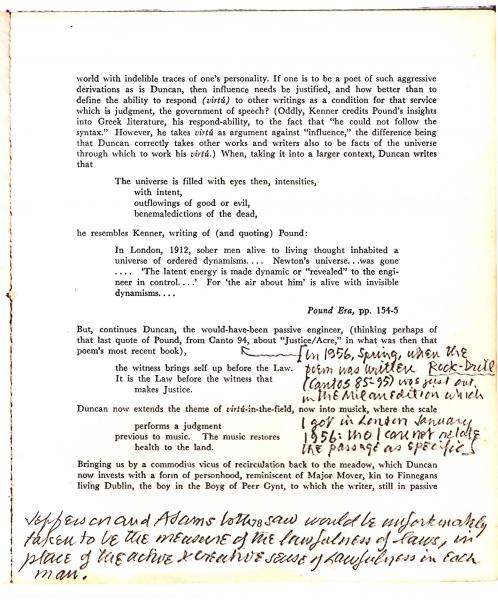 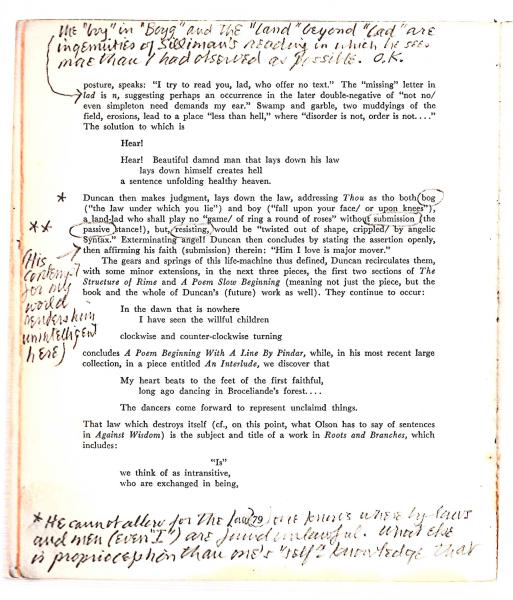 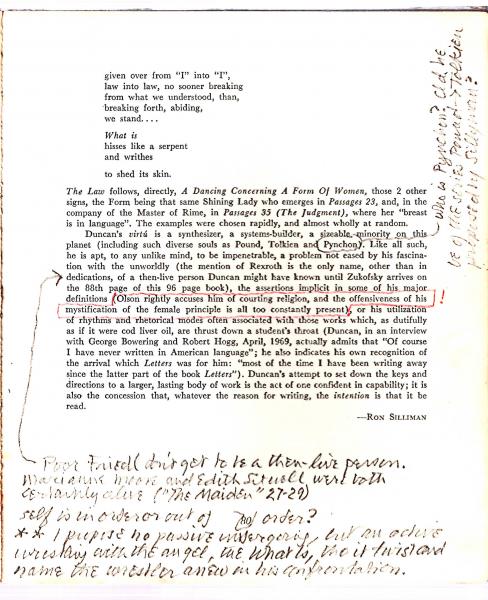 While Spicer derives "The Book" idea from me, surely such a derivation was not necessary. It is a perennial idea. Herbert's Temple gave it me.

Structures and Passages belong to the books in which they appear also!

Letters, poems 1952-1955 (the Preface being written in 1956) is contemporaneous with later Stein imitations and Faust Foutu and previous to Black Mountain (1956) where Medea was written.


Page 2
here he is right on. I was concerned with "orchestration" in The Opening of the Field particularly.

??? <— this is a meadow I return to in dreams and memorial thought!

*"Field" composition of the poem


Page 3
self and Self, mine, me, I belong to the grammar and lexicon of ideas.

["mind" is the whole-body intelligence]

see above: "Mind" has heart in it. the heart is not "mine"

<— I am a most active (watchful) watcher of what I am doing (making) and maker.


Page 4
Ron Sillyman's aversion to Mother ("aka mom" or, later, "the offensiveness of his mystification of the female principle"  and child ("kid's play") derails him in his reading.

<— this is a single long line!

* In his refusal to allow that this meadow is a fact of a dream that leads to his dismissing as mere "revery" and "kid's play" the crucial definition of the poem.

** the poem is a set of propositions, not explanations.


Page 5
but, no dancer, Sillyman misses that lama creative of dancing feet i follow

Who is Quine? I don't know.


Page 6
Sillyman has the major d[ ]ity of being unable to image the dancers and the Dance.

*He has no idea of "laws" passed by legislatures and legislators that can be found to be [sure] before our sense of lawful relations. The Constitution (of the U.S., here)

Jefferson and Adams [both] saw would be unfortunately taken to be the measure of the lawfulness of laws, in place of the active & creative sense of lawfulness in each man.


Page 8
the "boy" in "Boyg" and the "land" beyond "lad" are inqemuties of Silliman's reading in which he sees more than I had observed as possible. O.K.

(His contempt for my world renders him unintelligent here) —>

* He cannot allow for the law one knows whereby laws and men (even "I") are found unlawful. What else is proprioception than one's "self". Knowledge that


Page 9
Who is Pynchon? Cld he be of the series Pound —> Tolkien proposed by Sillyman?

Poor Friedl don't get to be a then-live person.
Marianne Moore and Edith Sitwell were both certainly alive ("The Maiden" 27-29)

self is in order or out of order?

** I propose no passive [undergoing], but an active wrestling with the angel, the what is, tho it twist and name the wrestler anew in his confrontation.

All the pages above, with Robert Duncan's markings, are available as a PDF.

May 16, 2011
Related:
On Robert Duncan, 'The Opening of the Field'
TAGS:
About this feature

At the Poetry Conference: Berkeley After the New York style
Robert Duncan's notes on Ron Silliman's 'Opening'
Preface to Jonathan Williams’ 'Elegies and Celebrations'
Ten poems
Ten Letters
Ten prose pieces
'Here at the last minute'
Getting shot of it: from 'The Interior Planets'