Mac Low as a shadow beatnik

For years I heard about Stanzas for Iris Lezak and read excerpts from it in Representative Works: 1938–1985 and Thing of Beauty: New and Selected Works, though never held a copy until recently. [1] When I did, I made a surprising discovery: the great extent to which Jackson Mac Low’s work at this juncture joins with the Beat zeitgeist.

Mac Low’s “systematic-chance” poems, known for their inventiveness, expose a wide range of human values, interests, struggles, observations, desires, and joys — even if they are mechanistically derived. Catching my attention in Stanzas for Iris Lezak was something humorous, not on the surface and not so much funny as revelatory about how the author connected with broader literary movements. A nominal connection, association, or appreciation for the Beats is not disguised by Mac Low. Poems titled, “A 2-Part Poem for Ginsberg & Burroughs from Burroughs’ Letter to Ginsberg” and “Asymmetry from Ginsberg’s KADDISH—22 Sept. 1960,” are among those that appear in the book. [2]

Beyond containing many poems referencing narcotics (i.e., “The Mind and Marihuana”), Stanzas for Iris Lezak’s camaraderie with the subcultural framework of the Beats also appears in its portrayal of hedonistic sexuality. A poem strongly representing this take on the material is Section I of “6 Gitanjali for Iris”:

The amusing and weird part, providing connective tissue to the Beats (beyond perhaps echoing Michael McClure), is not in the lines of the poem, which appear as sweet and expansive cut-up and/or slotted texts. Discovered in the “seed” text used to generate them — which “An Afterword on the Methods Used in Composing & Performing Stanzas for Iris Lezak” reports are taken from Rabindranath Tagore’s “Gitanjali” — are, however, these 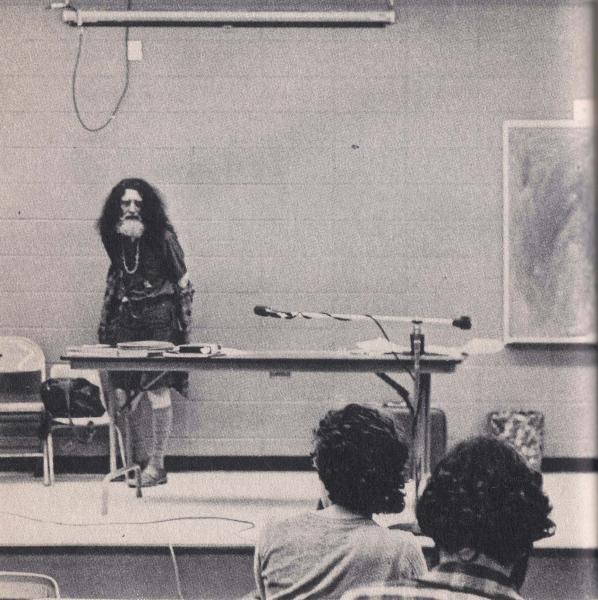 “exultant sentences”: “My girl’s the greatest fuck in town. I love to fuck my girl.” [4] Mac Low reads through Tagore’s book, selecting words conforming to the pattern designated by the seed phrases (e.g. first letters of the lines “My you / Gain is rainy life” spell “My Girl”). What Mac Low does with his corporeal impulse, expressed in a code a reader might or might not see, differs from the blatant sexuality found in Beat works. However, Mac Low significantly chooses to divulge this textual fact at the outset of his Afterword — so he clearly wants to let readers know it’s there!  [Photo at left by Rachel Homer, used with her permission.]

Stanzas for Iris Lezak also connects with the Beats by overt emphasis — by reference and process — on Eastern religion; it is peppered with Zen à la Kerouac’s Mexico City Blues, as in “Haiku (3 Oct. 1960)”:

Ripples in a pool
passions thoughts sensations lives
in serenity. [5]

Many poems reference Eastern iconography and inclination; one titled “Rinzai on the Self, or ‘The One who is, at this moment, right in front of us, illuminatingly, in full awareness, listening to this talk on the Dharma,” being a particularly prime example. Mac Low’s methods involve use of “auxiliary means” such as dice, playing cards, numbers, and the I Ching. [6] These algorithmic inventions serve to decentralize a subjective self from 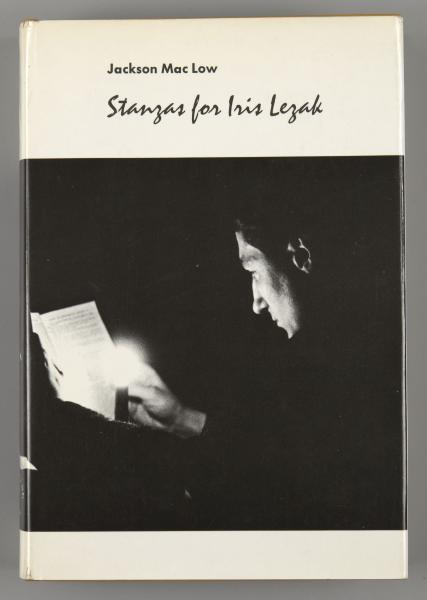 the poem — although because it is a poem, made with decisive content from human input, self-importance remains at the fringes. Mac Low revealingly writes, “the most ‘personal’ aspect of the Stanzas […] is the variety of source text.” [7] Because these are poems, published in a book, we cannot consider Mac Low’s efforts as a rejection of materialism (although its methods of materialization do not follow common convention), but rather as processed re-materialism that finds ways for one set of words to say more than one thing, confirming that multidimensionality exists within a single set of resources. In the early sixties, Mac Low’s identity was normally associated with Fluxus rather than with his bawdy beatnik contemporaries becoming well-known at the time; however, both influences are there. Mac Low references Keats in the title of Thing of Beauty; we know Mac Low and the Beats drew from the Romantics, connecting themselves to all of it, filtering multitudes unafraid to disclose liberated glory!

I title this paper “Mac Low as a Shadow Beatnik” to commemorate the observation, and have applied Mac Low’s expansion method to the book using the “seed” “Mac Low as beatnik.” Linear reading of the whole brought waves of themes — touching and reading every page and word, holding transcribing staccato blasts of constrained concept. Any reader sees how Jackson blends native with foreign, but who else becomes aware of how many pages can pass without having a word beginning with “w”? Like Emmett Williams’ IBM poems or Hugh Kenner’s Travesty, participating like this is instructive regarding language, authorial range, how limited speech is not always limited, and how cycles and patterns build force. Here are results of reading through the poetry until page sixty — seven lines made by a chance melding on the bridge between Modern and Postmodern, instructive to a culture around it:

Maharishi always concerning little of written are same beyond each added teachings no in known
Man’s actual conditioned literally on way a sangsaric but existence and true not is karmic
Mental are conceivable like of wills and such believes essentially and to nationally
intellectually keeping
Matter adopted carefulness less orient which as set before east age this no is kind-hearted Moderate affectionate catch letter only widow attractive single business ex-Navy
adventure the N.Y.C. interesting kind
Mercenary American character love one who a sense background employed attractive
travelled nice if know
Marrying away calm lady over who actor seemed being else’s at nothing in kindness
My asshole clitoris little one while Augustin since begin Eugénie’s a those kid.

April 27, 2011
Related:
listen to the audio recording of this talk
TAGS:
About this feature