On Daisy Aldan, 'A New Folder'

When discussing poetry in the year 1960, there’s perhaps no volume more important than Donald Allen’s The New American Poetry. [1] However, I’d like to argue that there’s another anthology that, in terms of both prescience and precedent, sketches out a blueprint for Allen’s collection and in some ways even supersedes his achievement. Nearly forgotten half a century later, A New Folder and its editor, Daisy Aldan, are certainly deserving of a greater critical recognition. [2] 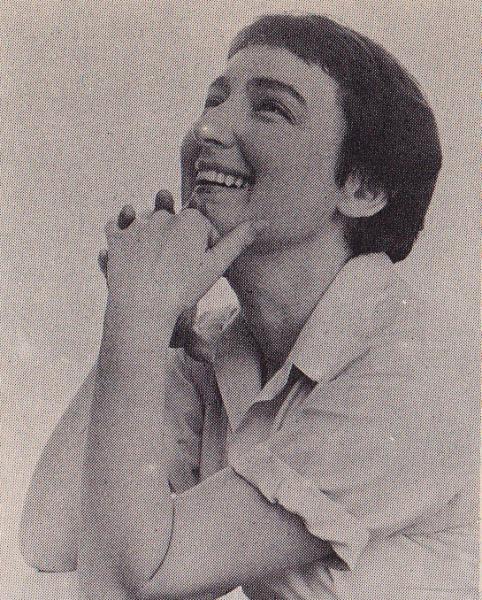 A child star of the CBS radio program, Let’s Pretend, Aldan was first published in the pages of Poetry by age twelve. After taking degrees at Hunter College and Brooklyn College, she spent thirty-five years teaching at New York’s School of Industrial Art, where her students included Art Spiegelman, Tony Bennett, Calvin Klein and Harvey Fierstein, as well as Warhol associates Gerard Malanga and Jackie Curtis. She cofounded the Tiber Press and the journal Folder with Richard Miller, releasing four issues between 1953 and 1956, then resurrected the title herself in 1959 with A New Folder, first published in a small hardcover edition, which was followed in 1960 by a paperback version. Given that much of the work originated in the subculture of little magazines, this format, which more closely mimics the portable aesthetics of those journals, seems ideal.

Allen sought to answer manifesto with manifesto, countering the “cooked” traditionalism of New Poets of England and America (1957) with a volume that dressed itself in the raiments of canonicity (including bibliographies and statements of poetics). However, Alden’s hybrid aims for A New Folder are still quite ambitious — to combine the anthology’s snapshot view of the best and brightest of contemporary American poetry with the journal’s diverse, risk-taking scope and more modest selections (most poets are represented by a single work) — and it bears repeating that she accomplished all of this before The New American Poetry was published.

In and of itself, A New Folder’s literary content is enough to make it a notable anthology, however, the volume also contains work from a staggering array of more than thirty artists including Larry Rivers (who also contributed a poem), Jackson Pollock, Franz Kline, Joan Mitchell, Philip Guston, Willem De Kooning, Robert Motherwell, Jane Freilicher, Grace Hartigan, Helen Frankenthaler, Michael Goldberg, Robert DeNiro and Charles Henri Ford. In his preface to The New American Poetry, Allen observes that his poets are “closely allied to modern jazz and abstract expressionist painting,” 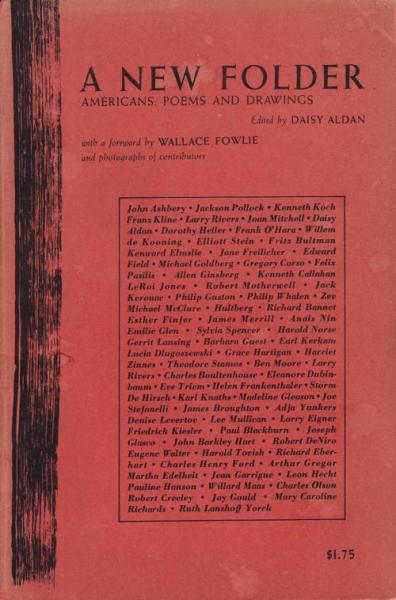 and while the spontaneous bop prosody contained therein might ably represent swinging rhythms and action painting, the real thing is conspicuously absent. [3] Aldan’s black and white photoreproductions do an admirable job of conveying this vital aesthetic energy, and Library of Congress records show that she recorded a number of New Folder readings and discussions, perhaps suggesting that she intended to add yet another dimension to the volume. It’s worth noting that Alfred Leslie’s “one-shot review,” The Hasty Papers (also published in 1960) achieves a similarly effective mix of writing and visuals. However, it’s almost entirely a male affair, and this is the last, perhaps most obvious way in which A New Folder differs from its contemporaries.

While many “feminine marvelous and tough” voices could be found in The New American Poetry, there were, of course, only four women among forty-four poets in the anthology: Guest, Gleason, Levertov and Helen Adam. Guided by the eye of an experienced female editor, it’s not surprising that nearly one-third of A New Folder’s poets are women, and the same percentage holds true for its artists. Such opportunities seem unprecedented in the late fifties and early sixties: writers like Joyce Johnson and Hettie Jones have retrospectively documented the limited venues for creative expression open to women during this time, and even outside the literary counterculture, misogynistic norms held sway (New Poets of England and America, for example, contains just as few women as Allen’s anthology).

In The New American Poetry’s bibliography, Aldan’s work with both Folder and A New Folder is given prominent placement, and in the intervening decades many of her selections have proven to be leading figures in twentieth century American culture. However, Aldan herself has tragically slipped into obscurity. She’s missing entirely or given glancing mention in important critical histories of the period such as David Lehman’s The Last Avant-Garde (1999), Daniel Kane’s All Poets Welcome (2003) and Steve Clay and Rodney Phillips’ A Secret Location on the Lower East Side (1998), receiving the most notice in Reva Wolf’s Andy Warhol, Poetry and Gossip in the 1960s (1997), largely due to having been Malanga’s high school English teacher. Even among as well-informed an audience as those attending our Kelly Writers House symposium on poetry in 1960, there were only three or four people who claimed familiarity with Aldan or A New Folder. However, it’s heartening that in this era of electronic memory — and through events such as the one this commentary was initially conceived for — she might finally be given the recognition that she deserves.

April 28, 2011
Related:
listen to the audio recording of this talk
TAGS:
About this feature

Poetry in 1960, a symposium: Question and answer session
On Daisy Aldan, 'A New Folder'
Three poems