The poetry of Alexander Vvedensky, cofounder of Russia’s last avant-garde group OBERIU, became available to Russian readers only a half-century after his death under arrest in 1941. Inheriting the utopian energies and ideas of the avant-garde, his work also provides the earliest example of its functioning after the collapse of the avant-garde project. His realization that the language of his time was indelibly compromised by outside power, and his success in coaxing truths out of such suspect material, make his experience particularly relevant for today.

English translations of Vvedensky’s late writings open my OBERIU: An Anthology of Russian Absurdism. This year, NYRB Poets put out An Invitation for Me to Think,a selection of Vvedensky’s poems that Matvei Yankelevich and I have translated. Under this short note you will find “The Soldier Ay Bee See,” which he composed in late 1937 or early 1938 for his newborn son.

Born in 1904 in Saint Petersburg, Vvedensky began to write poetry in the decade following the Russian Revolution when avant-garde art positioned itself as the laboratory of a new language for a new world. He and the young poets Daniil Kharms and Nikolai Zabolotsky led a group devoted to radical formal experimentation and inspired, to considerable extent, by the ideas and practices of Kazimir Malevich. They called their group OBERIU, an acronym for Association of Real Art (“real” here serving as the antonym of “realist”).

Founded in 1927, OBERIU folded three years later, a casualty of Stalin’s campaign to place cultural production under the management of the Soviet state, with propaganda as the end, and an idealized, easily legible mimeticism as the only permissible style. Vvedensky and Kharms spent the years 1931–1933 under various forms of internment for the inclusion of nonsense in, primarily, the children’s poetry they composed to make a living.

Their lives as poets in the Stalinist culture of the 1930s took place out of the public eye, and in the company of friends with whom they conducted conversations that were both philosophical and ludic. Holding terms, notions, tropes, and positions in common, they were developing a philosophy whose distrust of one-truth models was driven by disgust with the language of Soviet power. The work consisted in what Vvedensky called “the poetic critique of reason” (or else, of language), as well as phenomenological analyses, whimsical forays into scientific thinking, and, last but not least, the shared conceptual mythology of messengers, neighboring worlds, and the manifold nature of reality. Kharms and Vvedensky died after arrest by the panicking secret police during the German invasion of 1941. 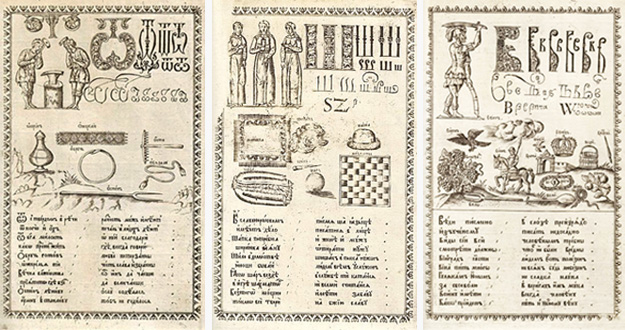 Much of Vvedensky’s work has vanished. “The Soldier Ay Bee See” was preserved by his last wife. She said he sang their son to sleep with the song at the end of it. It starts with a lower-case letter and ends mid-word: a fragment, but perhaps by design rather than by accident of history.

“The Soldier Ay Bee See” is shockingly lyrical. It is about language, loneliness, and love. Also about how nothing fits: neither words to things, nor things to things, nor people to people. And so everything is alone, even everything that loves. Also, it is about time, the suddenness, totality, and irreversibility of temporal change.

In Russian the soldier is called Az Buki Vedi, the archaic names of the first three letters of the Cyrillic alphabet.Together, they mean something like “I know letters,” with the first-person singular present vedi also invoking the name of the author. Actually, it does more: it connects “Vvedensky” with the old verb vedeti, which in the Russian tradition links poetry and prophecy.

The soldier’s name is not the only word game of the original. “The shore of the sounding sea” that Ay Bee See walks on cites book IX of The Iliad, with its setting of authority in crisis. Conversely, in the next and more jarring sentence, “He had a main directing thought about nuts,” the double adjective “main directing” comes from the phrasebook of Stalinism, where it stands for top-down, centralized leadership, and means, literally, “fundamentally hand-guiding” (as in “directing the hand of ...”). Stalin famously called the Bolshevik Party “the main directing force in the system of the dictatorship of the proletariat” (1926). During industrialization, “directing” became the term of choice for what management did: for example, on October 29, 1937 Stalin raised a toast to the “directing workers … of the metal and coal industry,” meaning factory bosses.

Vvedensky renders the Stalinist expression “main directing” both apt and absurd in several ways. Modifying “thought” returns “directing” to its literal meaning, since thought governs the motion of one’s hand, especially for a writer. But Vvedensky takes the “directing” part into redundancy: “He walked deep in … the main directing him thought about nuts,” that is, deep in the thought that was his main one and that was directing him. The fact that the thought concerns something as unheroic as nuts (see below) subverts the metaphor of leadership even further. Whatever politics the poet might be intending here, his poetics are those of estrangement of language and from language. (Although Vvedensky knew Shklovsky and his concept of estrangement, his linguistic operations here are more redolent of Andrey Platonov, whom he did not know.)

Most of Vvedensky’s linguistic games, however, are more philosophical than immediately political. Take the combination which I rendered as “They intently ate.” The adverb that “intently” is translates from, pristal’no,describes the act of looking — it is the “intently” in “they looked intently at him.” It cannot describe the act of eating. The five fishermen who are intently “looking and/or eating” are named Andrey, Bandrey, Bendrey, Gandrey, and Kudedrey. Their daughters are named Lialya, Talya, Balya, Kialya, and Salya. The first member of each series is a common, even banal, name in Russian, but the rest are constructed by increasingly complex addition or substitution of elements. Although the names have a fairy-tale feel, they also evoke the iterative motion of machinery generating ever stranger results, growing more and more abstract and dysfunctional.

The seas likewise form a series of five: “sounding,” “black,” “caspian,” “mediterranean,” and “adriatic.” Their series starts with a common adjective (“sounding”), progresses to one that may be either common or proper (“black”), and then proceeds with three proper adjectives increasing in syllable count and lexical complexity. The seas are said to be uniform and interchangeable, at least inasmuch as it does not matter which one the fishermen sail. The fishermen are also more or less interchangeable. When four of them address Ay Bee See, the text clinches their uniformity by employing past-tense verbs in the singular: postuchal rather than postuchali. In English this violation of syntax is impossible: the verb is the same whether he knocked or they knocked. (I compensated by introducing a singular pronoun: “rapped his fist”).

Serial membership makes the fishermen, their daughters, and the seas they sail resemble logical constructs more than really existing objects. The soldier Ay Bee See lives in a world alienated by human reason and language. Human reason and language cannot convey particulars but operate only in general categories. They try to describe the world but keep contradicting and correcting themselves, producing ever more copia, ever more generalities. The painfully and/or risibly convoluted sentences, vainly gesturing to explain when the fishermen live at home and when they light candles, engage in excessive specification that provides nothing other than redundancy. Human reason and language are exhausted. The world, which consists only of particulars, eludes them. It plays Eurydice to their Orpheus.

Such a world cannot be held subject to laws, since the essence of law is, as Kant asserted, generality. Hence “The Soldier Ay Bee See” casts doubt on not only linguistic reference but also logical inference when it asks whether something called a “nut song” must be about nuts. The answer — “it is far from being so always, but in this case it follows” — renders each instance of “following” a unique event that has no obligation to repeat. This Hume-like gesture is characteristic not only of Vvedensky, but of his whole group, manifesting itself most clearly in Kharms’s treatment of numerical succession.[1]

The particular and the general again come to blows in the nut song itself. Admittedly, the soldier compares two species, and therefore two general constructs — the Brazil nut and the walnut (“American” and “Greek nut” in Russian, respectively). Yet it is an issue for Vvedensky and his friends that the procedure of comparison foregrounds commonality while eliding irreducible uniqueness, necessarily misconstruing the objects being compared. Hence Kharms, in a fragment that starts with “numbers are not bound by their order,” argues that no natural object is the same as any other. Therefore Ay Bee See’s song primarily concerns the inexhaustibility of difference, rather like the Mad Hatter’s riddle of the raven and the writing desk.

Finally, the soldier’s transformation into a father, although clearly autobiographical, is shaped by the same philosophical attitudes. In being irreducibly unique, every event is sundered from those before or after it, with linear time becoming yet another error of generalization. On the philosophical level, it is this discontinuity between what his friends called “intervals” that Vvedensky expressed in the abruptness of the soldier’s change that, even more strangely, reverses in the last line of the piece. On the psychological level, I take this experience of temporal absurdity to be a familiar one.

Perhaps my readers have noted the correspondence between the philosophical tendencies briefly delineated here and the ’pataphysics invented by Alfred Jarry as “the science of the particular, despite the common opinion that the only science is that of the general.” No direct influence of Jarry can be traced on Vvedensky and his friends; rather, they share a skepticism with respect to both scientific methodology and its rhetorical employment in putting forth truth claims. Such skepticism lends a political sting to even the more abstruse philosophical themes in the writings of Kharms and Vvedensky. In the situation where political power presents itself as the inevitable result of the laws of history, any critique of law, inevitability, or generality may be construed by an outside observer as critical of the regime. Although the arrests of Kharms and Vvedensky cannot be used as evidence that the critique was either intended or understood — plenty of perfectly loyal people were executed or perished in the camps — the authorities that were seeking out ideological resistance appear, in this case, to have found it.

An earlier draft of this translation appeared in A Public Space. Another has been included in An Invitation for Me to Think. This version introduces several new corrections.

The translation projects represented in this feature on contemporary Russian poetry have been made possible by a high degree of close, lived contact — contact that circumvents and short-circuits older systems of baffles and filters (while, perhaps, instituting new ones). In this feature is translation as a form of intimacy. The result, a small sampling of which is included in the essays and translations published in Jacket2, is a new injection of the writings of contemporary Russian poets into the American scene, and a glimpse into formerly remote Russian poetic counterpublics.