'Our' extremities, 'my' extremes

In his rightfully famous “Letter from Birmingham Jail,” Martin Luther King Jr. recounts his confusion, refusal, and eventual acceptance of the label “extremist” from his critics. King notes that there are two tendencies of extremity: extremism for moral good and extremism for moral evil. And as he puts it in “Call to Conscience,” insofar as America is an extremist nation for moral evil per its actions in Vietnam, he and other antiwar protesters are morally compelled to be extremists for good. In King’s writings and speeches, extremism begets extremism, and thus, in the context of the Civil Rights Movement, the liberal appeal to “moderation,” to “gradualism” (both John F. Kennedy and Lyndon B. Johnson tried to persuade King to “slow down”), could only appear, for this man of the cloth, as a call to remain “lukewarm.”[1] Since both King and Malcolm X, to say nothing of organizations as politically diverse as the Students for a Democratic Society, the Weathermen, and the Black Panthers, were labeled extremist during the turbulent decades of the sixties and seventies, extremism is not necessarily a form of ultraleftism, a political stance that insists on the inevitability of physically violent means to just ends. However, what the individuals and groups named above have in common that justifies the extremist label are their differential commitments to the destruction of some — but not all — of the forms the status quo assumes at specific historical moments.

Of course, the status quo is never static. Often a Janus-faced state — empire aspirations wedded to xenophobic introversion — the status quo annexes the near and the far, the familiar other and the strange other, incorporating both into a new, rebooted status quo. Because the status quo is always active, ingesting and expelling, it refuses the very borders it nonetheless enjoins as necessity: thus the political, social, cultural, and economic realms bleed into one another. The implications for what we narrowly define as aesthetics and, even more narrowly, poetics, should be apparent. Every poem in the world — written, drawn or uttered, published or not — is a record of the world as experienced by or filtered through its architect (human being or computer algorithm). In one reading, the more the poem accedes to the “world” the more extreme it becomes, an extremity labeled “didactic,” “social science,” “prose cut up into verses,” and so forth. In yet another reading, extremity is labeled “pedantic,” “academic,” and so forth. Extremity can thus refer to poetic tropes at odds with each other. 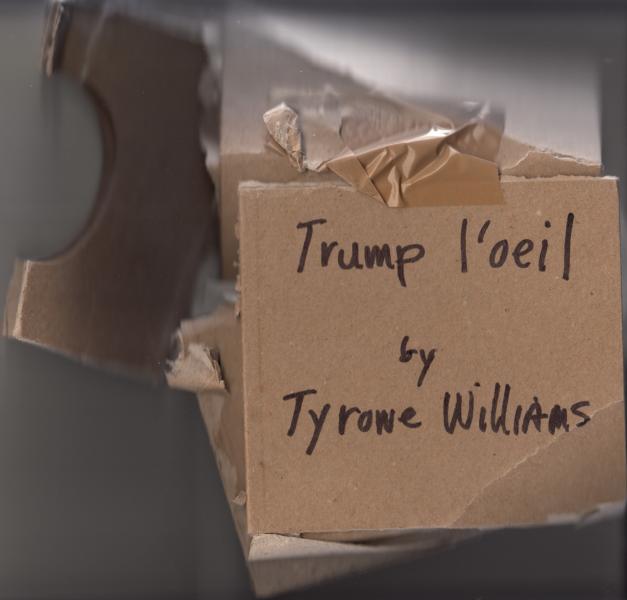 Here is the statement I wrote for my Hostile Books project in 2016, distributed by mail in 2017 as Trump l’oeil:

On October 18, 2016, some two weeks before the USA presidential election, I was one of several individuals who received a general call for work from Hostile Books. After poking around the press’s website and looking at previous work, I replied on November 12, 2016, four days after the election, with a proposal: fifty-two crushed tissue boxes containing epithets directed at the president-elect, though largely inspired by the campaign season. I don’t recall exactly how I generated this idea; I do know I wanted to play around with three interrelated ideas: the nostalgia for a return to the country’s childhood when there were “only” thirteen colonies, the incorporation of the District of Columbia and territory of Puerto Rico as “states” within empire (hence fifty-two boxes), and the “illusion” of three-dimensional space as isomorphic with, for lack of a better word, “reality.” The partial destruction of the tissue boxes represents the “intrusion” of temporality (I smashed each box with my right foot in my office), that “fourth” dimension called change which undermines every status quo, every “state,” as such. But in my initial response to Hostile Books I also said I wanted the tissues to be used — sneezed on, coughed on, etc. I eventually decided against the hazmat route (but if there is a next time …) since I’d be forced to either wait until I actually had to sneeze or cough or fake it — the exigencies of the academic year made the former too chancy per the deadline and I didn’t want to do the latter. Instead, each of the fifty-two boxes contains thirteen inscribed tissues, one-liners, single zingers that nonetheless continue to be outperformed by the antics of the leader of the … ahem … free world. The ephemeral status of the project constitutes a shot across the bow …

Trump l’oeil was not my first foray into the territory that constitutes one mode of aesthetic extremity — see my comments on Howell below. I conceived Trump l’oeil as a project working within, while gesturing toward the “outside,” of English-language poetics, metaphorized as the world beyond the tears, cracks, and gaps in the tissue boxes. As for “content,” the one-liner/one-sentence poem also shows up in my first book, c.c., a minimalist gesture generally inspired by the “dozens” of my childhood and, in particular, the early pre-Warner Bros. (that is, the “chitlin’ circuit”) comedy of the late Richard Pryor. I would be remiss, however, if I did not also cite my fascination with a one-line poem from avant-garde poet Chris Tysh, a poem I tried — essayed — to bring into conversation with the dollhouse projects of Detroit artist Tyree Guyton. One might thus understand the tissue boxes of the Hostile Books project as miniature versions of Guyton’s repurposed dollhouses even if our political/social motivations diverge. At any rate, Trump l’oeil was meant to expose the appeal to nationhood, to unity, to the return to, the return of, greatness: in short, the rhetoric of rightwing political extremism (and this remains true no matter which mainstream political party, or even which alternative political parties, stand on this platform), as a literal coverup that depends on optical illusion: the trompe l’oeil. In yoking together an “extreme” aesthetics and the simulacrum of an anarchist politics, I wanted to also criticize in advance the organization of “resistance” in the name of national unity, nationhood, and so forth (formulated in the “we’re better than this” rhetoric). This criticism does not spare the rapid deployment of anti-Trump poetry anthologies, including the one in which I reluctantly participated, for how could these good intentions not appear as a kind of collective aesthetic and, yes, political opportunism? Let me be clear: Trump l’oeil was not a reflexive endorsement of libertarianism, though I must admit my anarchist friends from the Detroit I grew up in may have had some influence on my thinking around these issues. It was thus important to me that the project be distributed, however limited, at no cost and that it, in that historical moment, be the work of an individual in collaboration with a cadre of like-minded individuals, the people at Hostile Books.[2] And anarchism, libertarianism, as well as Marxism, drive the “narrative” of my 2011 book, Howell.

I began writing “How(el)l” about ten years ago in the wake of the Oklahoma bombing and subsequent trials of Michael Fortier, Timothy McVeigh, and Terry Nichols. The title refers to some newspaper accounts of the itinerary of McVeigh in Michigan when he visited and stayed at the Nichols brothers’ home “near Howell, Michigan.” The location of the Nichols house, near Troy, Michigan, is actually nowhere “near” Howell. I became interested in this little village northwest of Detroit, Michigan, and why it had been selected as a convenient reference point for readers unfamiliar with Michigan cities and towns. I began reading histories of Howell, themselves remarkably uninspiring, and as nondescript as Howell itself. Yet, Howell is also the kind of nondescript town that McVeigh grew up in (Pendleton, New York, “near” Niagara Falls). So my poem is actually a kind of “writing through” the history of Howell, Michigan (there are, at last count, at least four different histories of Howell online, and these constitute the major divisions of the poem). As well as a writing through the details from McVeigh’s own biography. Howell is thus not only a “staging” of dialogues between the temporal and spatial dimensions of language — in particular, poetry — and dialogues between a number of individual artists and thinkers whose work has been important in my development as a literary theorist and poet, but also a cloud chamber in which cultural, political, and philosophical positions, controversies, issues, ideas, and values collide, leading — another name for hope and despair — to the creation of “new” ideas and values.

I wanted to trace these histories to their nation-state and international “empire” extremes, the annexation of that deemed too “near” to be left alone (the buffer zone strategy perfected by postwar Russia as the USSR) and too “far” (understood as difference) to be familial/familiar/family. These micro- and macrolineages constitute a specifically partisan reading of American domestic and international histories, though the two are, in actuality, one impossible “history,” the impossibility of one history. In that sense Howell refuses to fetishize McVeigh and his cohort as either aberrations within putative democratic states or the limit of terror as defined by modern nation-states, whatever their political or economic orientations. Indeed, that word, terror, never appears in Howell since the book is a compilation of wars on domestic and foreign soils. And these wars — including the Revolutionary and Civil Wars — continue to be fought in various spheres (political, economic, judicial, etc.), on various grounds (not excluding Stand Your Ground laws that, however applied with prejudice, undersign individual — e.g., George Zimmerman — and collective — e.g., the Black Panthers — acts of self-defense). In short, Howell was my attempt to understand state war and stateless terror as moments along a continuum insofar as those that live in stateless conditions often, if not always, aspire to sovereign statehood (from the Republic of New Africa to Palestine). Unless state-sponsored (e.g., the British Empire’s final solution — Bangladesh, Pakistan — and its India “problem”), these aspirations to statehood are often deemed various modes of extremism, a label many wear proudly.

1. See Revelations 3:16: “So then because thou art lukewarm, and neither cold nor hot, I will spew thee out of my mouth.”

2. The distinction I am drawing here between a cadre and a “group” assembled in an anthology is based on the question of effect and affect, the pinpoint force a small unit can impose vs. that from a large “diverse” regiment. I have in mind the various but unaligned Occupy movements that sprang up in towns and cities in the wake of the bank and fiscal crises of 2008.

This feature, curated by Jacket2 editor Divya Victor, explores “extremity” in twenty-first-century poetics: formally, thematically, and philosophically. Through “Scholarship,” “Engagements,” and “Cases,” as well as a special Philippines Dossier on materiality and political resistance, “Extreme Texts” grapples with the social role of poetry in the contemporary political landscape.

Poster design based on images by Nurul Wahidah; banner by Alyson del Pino.

Walking through speech to speaking
Black/women are alive after tomorrow
'Our' extremities, 'my' extremes
Examples of
Climbing earth
Before the laws
TB