Where do you draw boundaries between a translator’s research and the collecting of stories about the poet?   Stories expand on the truth while distorting the truth.  Hearing them is an inevitable part of the translation process — or at least it has been for me, because I have translated materials over time from a series of writers with links to the same city, which means that my interpretations are partially influenced by the city's shifting artistic community.

Here I propose that stories represent their own truths, and those truths signify.  Tellings become evidence of the way a poet and the writing are imagined by others, which is a "real" aspect of a writer's legacy.  Therefore a tale has the potential to define indices of poetic power, a force that accrues over time out of colliding realities and is enhanced in its unclear borderings upon myth.

Previously I introduced artist Nelson Villalobo(s), a close friend of the late Cuban writer Angel Escobar.  Here I offer another round of remarks from Nelson, whose memories nicely complement statements I’ve seen and heard from others. In addition to their value as testimony from a close personal friend of the poet, Nelson's comments bring out complex emotional dimensions of issues that are already making their way into the emergent literary criticism around Escobar’s poetry, there in the language and tonalities of scholarship.

The first story from Nelson (in English and Spanish below) includes reference to an issue that I have encountered in direct and indirect remarks from other writers:  the way that people in Havana responded to Escobar's patterns of speech. Born in rural eastern Cuba, Escobar came from an impoverished family of Afro-Cuban descent.  When he moved west to Havana in pursuit of his education, accepting scholarships to study theater, Escobar was met with admiration in some circles but also experienced derision.

Several people have told me informally that Escobar became very aware of his accent, among other signs marking his personhood as “eastern” – that is, as an "other" from Oriente.  It is a specific kind of "other," an iconic figure who exists in contrast to the Havana urbanite, who is more western in a Cuban context.  This is no small issue for a poet with such sensitivity to the sound of language, or who displayed such a determination to take on the forces of canonicity (intertwined as they are in messaging about classes, races, genders, nations and more).

Nelson’s story centers on their first meeting and enduring friendship.  The photograph opening this entry came from Nelson sent as a companion to this tale, to show something of its setting.

Before I met Angel personally, I encountered his voice:  when I heard him recite from José Martí during the morning services at the National School for Visual Art in Havana.  It was the first time I had heard anyone recite a poem.  This was sometime around 1975.  You could hear laughter amongst the students because when Angel spoke he didn’t pronounce the letter “s,” and it was funny to hear.  But Angel ignored it and kept reading.  He read poetry every morning in the service.  I’m very grateful to him for that because, with his voice out of eastern Cuba, he made me a reader and listener of poetry, above all his own poetry.

From that first moment when I heard him read I said to myself:  That guy has to be my friend.

And that same day, when we got in the food line, I went up to him and said I liked hearing him recite “Zapaticos de rosa” (“Little Pink Shoes,” one of Martí’s works for children in The Golden Age), that it was the first time I had heard poetry recited and that I wanted to be his friend.

Angel, who was taller than me, leaned over.  He slapped me a few times around the back of my neck with his right hand, stepped back a little, smiled, and we reached out our hands to each other.  From that point forward.  (email, 5 October 2015) 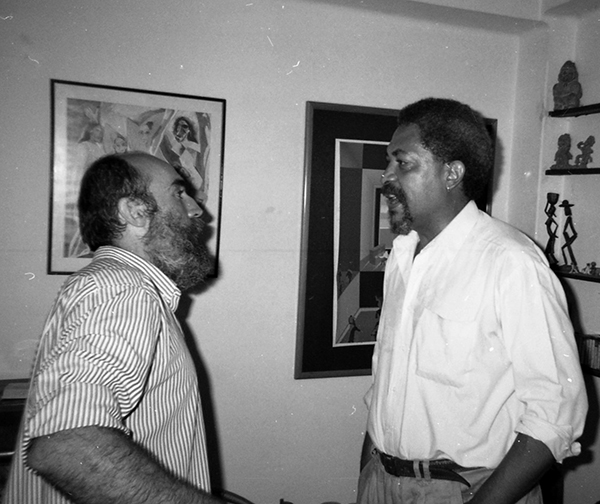 Nelson Villalobo and Angel Escobar, 1987. Photo by Eva Leal Lavandera.
Taken at Villalobo's home and studio, in Virgen del Camino.  The area is in San Miguel del Padrón,
one of the 15 municipalities making up the province of Havana.

Expanding further on Escobar’s immersion in the arts, a pattern not only found in Escobar's formal education but in their friendship, Villalobos wrote:

The visual arts are essential to Angel’s poetry.  Angel shattered into images.  As a being, he discovered something that Rilke knew as well:  that which is beautiful is no different than the birth of that which is terrible. From this came his passion for knowledge of the human condition, the suffering, loving and dying.  Angel was the poet of visible solitude.  He knew himself to be alone with the final response.  His encounters with poetry and visual art brought the light to his aesthetic environs.

In Angel’s poetry there is a transformation from the poet into the painter, the painter into poet.  There are conversations, intensities, and meetings that always were and are ongoing with Angel and me, above all in terms of death, a theme always present in our works.  (email, 5 October 2015)

Looping outwards from poetry into the interdisciplinary arts through these observations from Nelson, then, helps to complicate images of Escobar even as this conversation returns to the centrality of death in the remembrance and recirculation of his poetics.  A greater perception of light becomes a greater perception of dark.