Uxudo is Anne Tardos’s interlingualist book of 1999 (Tuumba Books/O Books). At an “After-Englishes” event in Manoa, Hawaii, that same year, Tardos gave an introduction to the Uxudo project. She then read passages from the book. Here is a sampling of five poems/sections: 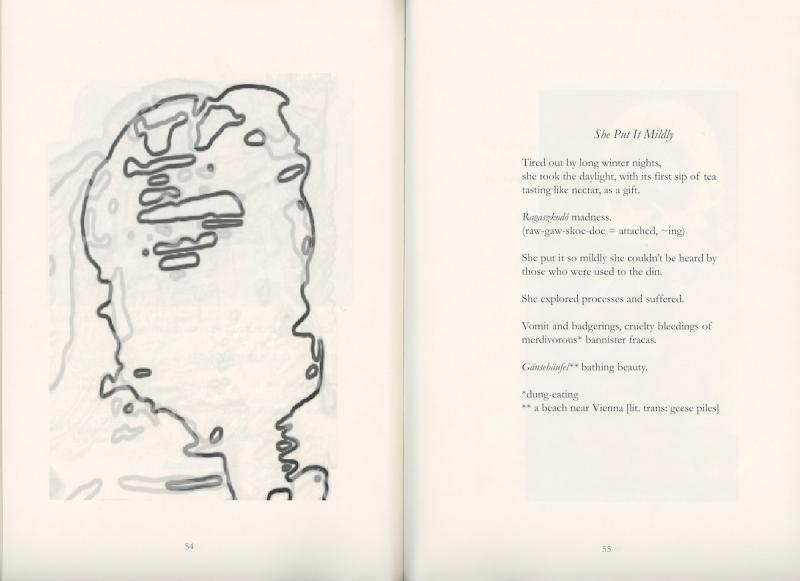 “She Put It Mildly,” p. 55 [audio segment here; audio recording starts at 00:00 here]. Click on the image above for a larger view of the text.

Abdellatif Laâbi's 'In Praise of Defeat'

Archipelago books — maybe right now the finest US press truly turned toward and tuned in to the world beyond these Benighted States — has just released a gorgeous eight-hundred-page bilingual tome of the Moroccan poet Abdellatif Laâbi’s Selected Poems under the title In Praise of Defeat. The choice of poems is the author’s own, and the excellent translations from the French are by Donald Nicholson-Smith. Rather than “review” and laud the book here now, I’ll own up to the fact that it was my great pleasure to write a foreword for the book, which I’m reproducing here below. Enjoy, and then buy the book — don’t let the heft make you hesitate: the book — in Archipelago’s usual square format — rests well in the hand, is a pleasure to handle and read.

Between the Devil and God

Best known in China for his translations of J. H. Prynne into Chinese, poet and scholar Li Zhimin is known in the US primarily as a fixture at Chinese American Association of Poetry and Poetics conferences and as an editor of the poetics journal Espians.

Sounds outside of English

Earlier this week, I received an email from a friend of mine, the poet Sonnet L'Abbé. She sent me one of her poems, "Ghazals for Zahra Kazemi," which appears in her book Killarnoe (2007). The occasion for the gift of this poem was the deaths of two Canadian soldiers in two separate incidents: when I received Sonnet's email, I was listening to a news report in which the two incidents — which took place in two separate provinces, on two different days — were blended together and blamed on radical Islam. Sonn, it emerged that the shooter in the second incident was Michael Zehaf-Bibeau, a person with an apparent "Arabic-sounding" name.

One recent example of a multilingual cultural text is Coca-Cola's 2014 Super Bowl commercial "It's Beautiful," which was also shown during the Sochi Olympic Games. This ad touched a nerve because it features eight tween girls singing "America the Beautiful" — but they do so in, Spanish, Tagalog, Mandarin, Hebrew, Keres, Senegalese French, and Arabic as well as English (quelle horreur!). Beginning in English with a shot of a cowboy on a white horse, the ad includes diaphanously lit outdoor scenes, wholesome images of kids in a movie theater, surfers bobbing on the waves, break-dancers, a family on a roadtrip, a brightly lit Chinatown. Representations of urban modernity and rural tradition are seamlessly interwoven, and all differences are overcome through the shared melody of the girls' multilingual hymn.

Multilingual writing has been ubiquitous since — when? The ancient Romans used it to pay homage to their literary forebears and for expedient communication. Medieval poetry mixed Latin with vernacular languages. And the modernists, of course, delighted in linguistic collage. In the 1980s, Chicana feminists moved between Spanish, English, and Spanglish as they composed their autohistorias. Meanwhile in Quebec, Francophone and Anglophone feminists collaborated on translational corps/textes.

For this PoemTalk episode about Matvei Yankelevich’s book of poems (or book-length poem), Dead Winter (Fonograf, 2022), Al Filreis convened Kevin Platt, Huda Fakhreddine, and Ahmad Almallah to discuss four poems/sections from the work: “Winter comes calling” (7), “Winter have I lost your thread?” (12), “In a disjunctive age, disconsolate, without connection” (21), and “Winter and one more mine is the other guilt” (27). Our recording of these poems was made by Matvei just for PoemTalk and is available now at his PennSound page. (That PennSound author page, by the way, already includes a video recording of a conversation with Matvei himself about Dead Winter — joined by Kevin, Ahmad, and Al as well as a dozen or so of Ahmad’s students.)

Atefeh Chaharmahalian (poet, a member of the board of committee of Iran’s Writers Association, and social activist) / arrested by security forces in Tehran on October 3, 2022 and is being held in Ward 209 of the notorious Evin Prison. She has been denied the right to have a lawyer and her bail request has been rejected. She has been reported to be under pressure for forced confessions, causing considerable worries about her well-being.