Rito Ramón Aroche (b. 1961) assembles and dismantles scene after scene in distinct poetry collections.  Many pieces project such a heightened awareness of construction and destruction as to put anything called “reality” at a marked remove.

The following excerpt from a poem, which openly parallels the irreal with the real, is taken from Material entrañable. Aroche won the 1994 April Prize with the collection, and according to some contextual materials like his Alas Cuba page the book was published in the same year.  However, Aroche clarified for me, Material entrañable didn’t actually appear as a published book until sometime in 1996.[1]  I retyped the following excerpt from the reprint in the anthology Historias que se confunden (2008).[2]

equinoctial oh Lord oh Lord
plays of
split ends
and snowcones and strawberries and what we slurped
snowcones
and which places
which stories     what we sweat out         fixations
both equinoctial               and exact
what we felt      and touched and yeah
oh places.

To readers familiar with the Diásporas writers and their magazine, it would probably come as no surprise that Aroche was reading continental theory in the 1990s in Havana as a way to unsettle and recalibrate the representation of life in the city.  For readers who haven’t had the chance to see writing from this group, it is smart and striking stuff, seeking out creative and theoretical works from international writers.  Of deconstruction in particular Aroche recalls,

Deconstruction attracted my attention after I read Derrida.  I was asking whether that resource (as a resource) could be applied to poetry in the moment of writing poetry, or story.  Curious thing:  in Cuba, as early as the ‘40s, someone had stumbled on a thing called the aeriform method.  The author was [Enrique] Labrador Ruiz.  But no one talks about that.  About how a Cuban got a little ahead of his time.

It seems right that for its first print publication Aroche gave his 1999 collection Andamios, or Scaffoldings, to the alternative magazine Diásporas.  In his own relaxed avant style, he envisioned it more as a chapbook and potential book-object for future artistic collaborations than as a conventional book of poems.[4]  Thanks to the efforts of Steve Miller, a bilingual book-object version is tentatively forthcoming from Red Hydra Press in the near future, with art by Alejandro Sáinz.

Slim yet challenging “scaffoldings” represent Aroche’s only appearance in Diásporas, now seen as one of the most significant cultural and critical interventions in recent literature out of Havana. Unlike many of the other writers who participated more regularly in Diásporas, such as Rolando Sánchez Mejías, Pedro Marqués de Armas, Carlos Aguilera and others who have now moved abroad, Aroche still lives and writes in Cuba today.  (He remains on the radar of writers who shifted from metaphorical diaspora into literal diaspora:  here & here, for example, are some recent posts calling attention to his work.)

Equally significant, I think, may be the point that for his own writing Aroche appears to prefer cultural margins more than centers, although he does work in a relatively centralized and prominent place in Havana.  That’s the Cuban Book Institute, located in a former bank that is the tallest building on Obispo – but to get coolly marginal again, Aroche descends into the basement to do his job, promoting culture out of the former bank’s vault. Meanwhile he has participated in events and publications associated with groups still active in the city.  For example, he has read several times for the Torre de Letras, or Tower of Letters, as in the presentation of his 2014 book Una vida magenta (A Magenta Life).  Aroche often seems to be photographed in hats at poetry events. 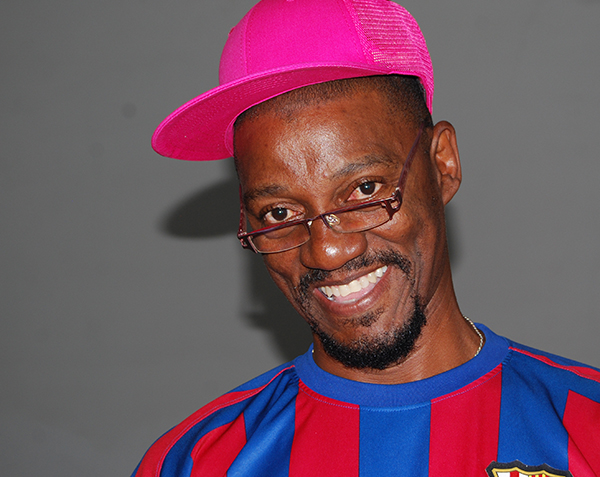 Should you doubt my hat observation (OK, to be accurate, I brought him the pink one in honor of Una vida magenta), you can watch Aroche read in a hat here at the Medellín Poetry Festival.

Aroche also blogs for El Palenque, a group featuring international as well as local poetry, while also animated by the history of their name.  The Cuban palenque originates in centuries of slave resistance under Spanish colonial rule.  Runaways fled in groups to areas outside the colonizers’ reach to create new communities, which were called palenques.  Groups living in the palenques are thought to have included Africans of diverse origins, meaning that diversity within these communities probably extended to language as well as ethnicity and cultural practices.[5]

[1] Throughout this entry I draw on Aroche’s remarks from our email correspondence from June 25-29, 2015.  Furthermore, he pointed to specific choices in the translated poem from Historias que confunden that I haven’t explained in detail above.  For example, “rayados” is a term for snow-cones that Aroche recalls as specific to eastern Cuba.  In Havana, where he now lives, a different term is common: “granizados.”

[2] Here too there is some need for corrections.  While the Historias que confunden edition is useful in that it allows a reader to look across distinct works by Aroche, it’s full of errors.  When I asked the author about a probable spelling error in the poem excerpted here (“deconstruido” is misspelled in that edition), he added that there are not only many similar errors but that entire poems are missing.

[3] Readers in the US may be interested to know that Labrador Ruiz, after entering exile in the mid-70s, eventually settled in Miami.  His papers are held at the University of Miami Libraries, in the Cuban Heritage Collection, and are noted at http://merrick.library.miami.edu/cubanHeritage/chc0111/

[4] Andamios was first published in Diásporas 4-5 (1999), where it is compressed into barely 2.5 pages, foregoing the ample use of white space that makes room for thought, and then for art in the form of the book-object. After the initial magazine appearance, it was republished in Cuba by UNIÓN.  Jorge Cabezas Miranda has edited a facsimile version representing the magazine’s issues from 1997-2002, flanked with related commentaries and context.

[5] To reanimate the name in contemporary cultural circles is to suggest the ongoing relevance of race; sustained gestures of the kind chafe comfortable visions promoted by Cuban leaders since the days of Martí.  There are many who have suggested that nationality can and should trump the markers and discourses of difference within the island, so overt naming and discussion of race are not universally embraced.