Based in Amsterdam for much of this period, Pérez sought ways to eke out a living from scattered jobs in translation, editing, domestic work and childcare.  He wondered whether his stay might lead him to settle in Europe. Unlike some emigrants from this time period, Pérez did not approach this situation by settling into a diasporic Cuban or Latin American community.  However, the apparently idiosyncratic book of reflections opens out to broader issues anyway.  His notes on the journey touch on brief, telling details about the everyday experiences – and common paperwork — that migrants to Europe encountered during this historical moment.

Much of the journal is composed primarily in Spanish, and my translation shifts this anchor language into English for new readers.  However, as even this translation demonstrates, Pérez took a conscious interest in traversing the “translated worlds” of the visitor, the temporary resident, and the potential immigrant.  He experimented with multilingualism throughout his book of days, and he would subsequently create a book of multilingual poetry, Lingua Franca, grounded in this period of his life.

The flexibility of the notebook genre — book of days, writer’s diary, traveler’s journal — allowed him to blend elements of system with a celebratory anarchy in his use of languages.  Sometimes terms from languages other than Spanish or English are marked as foreign, italicized, defined, even contextualized. And sometimes Pérez marked them down without any of these signals to the reader, a way of writing that can be rebellious at times, then simply a straightforward comment about living in a multilingual way.

“Cubanology” is often Spanish-dominant, as noted above. However, his frequent uses of English challenge that categorization, which presents a complication for translating the journal “into” my English. Pérez was already an accomplished literary translator before his journey, and he encountered English in many new forms during his European travels. In my translation I’ve occasionally altered his phrasing within long passages of English.  Most often, though, I leave his phrases as they appear in the original — I began to consider the preservation of differential fabrics of English as a gesture true to the intersections comprising our project.

In the end there is no right way to create an overall system for presenting Cubanology in English translation.  His original text both performs and defies categorization of languages.  Perhaps this is the best way to define that which is “Cuban” in this daily study of Cubanness, a Cuban-“ology” witnessed through the prism of life in Holland.  It was an easy decision to retain Pérez’s use of languages other than Spanish or English.

In the excerpts from early 2004, below, Pérez includes substantial amounts of Dutch tied to programs directed at potential new citizens.  Remarking on the Dutch language class, he uses the term “rats” for immigrants:  this is a reference back to an earlier moment from the class, when a student from elsewhere in the Caribbean referred to fellow students from Morocco as “rats.” Pérez also depicts the circulation of many languages in a new workplace, a travel agency called Bookings.  Bookings was one of the only potentially stable and on-the-books job opportunities he received while testing out life as a proto-emigrant from 2002–2005.

Had things worked out at Bookings, maybe Pérez would have settled in Amsterdam.  But in the end, European office jobs did not turn out to have much appeal.[1] 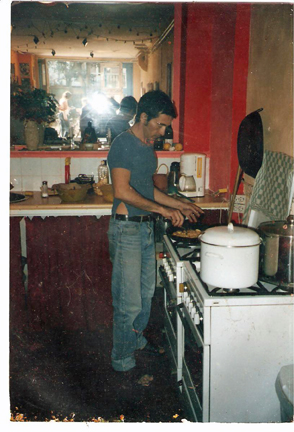 Nederlands Schrijfboek: important! belangrijk; high percentage of older people, ouders. The Dutch, according to the teacher, sometimes prefer to have a dog or cat and don’t have young, well-trained people to help them.  From which this situation arises — these lessons for immigrants who keep on arriving, rats or not, ongeletterden, illiterate, or andersgeletterden, followers of some other alphabet. This is a brugperiode, bridge-period, with its hyphen and ellipses.

It’s my third week of classes in the new school:  new pine trees.  The patio is right next to the balcony at Jeroen’s house.  Coinciding, dunque, in de Pijp neighborhood.

Adult or not, you must attend five days a week, five hours per day.

The teacher presents the first poem, maybe the first modern poem, ultramodern, in the Dutch language.

And that’s how the doors of the school are:  pushing and pulling doors, I go at 1pm to clean Jeroen’s place.

Jan Peter Balkenende, known as the Harry Potter of Holland, is Minister-President.  De Republiek, or rather the entire republic, is a coffeeshop located on a corner of the Staatsliedenburg, one of the “bad” neighborhoods in A’dam.  Actually it looks like one of those cafeterias where they sell fruit smoothies.

And so with that rhythm I begin my reading of the essay From Seville to Amsterdam: The Failure of an Empire, by Immanuel Wallerstein.  Citation – The Modern World System, an anthology of essays from Academic Press, Inc, 1974.

Here was a nation created
in the confused circumstances of revolution.

At school, Toets Spreken, the oral exam.  With a machine:  beep.  Niet zo goed, at least two mistakes, maar, but ik ben niet bang, ik ben niet bezorgd. We also learned this today, February 24:  I’m not afraid, I’m not worried.  Sentence of the day: op hetzelfde aambeeld hameren.  Literally:  hammering on the same old anvil; harp on the same string, raining on wet ground.  Rain on the anvil, rain on the harp.  Rain — no lack of that.

As for the faculties concerned in this learning, listening is receptief: the anvil; speaking is productief: the hammer. I need a hammer, a hammer, says Bob Marley, to hammer ’em down.

At the coffeeshop Rokkerij I drink a coffee as I wait for the job interview with BOOKINGS at one o’clock, tick tock, my daily slog. C’est quoi? A job ad I found on the wall at school: an agency, online reservations, call-center, any old kind of work. Another season, other means. The important part:  how many hours per week, uuren per week, how much protection I can get through this job in the sociale ziekefonds, social health insurange program. If I’m not sick! In sum, wat te doen? Geen onderwijs? Ja.

The interview is short, by the clock. We shake hands; they’ll call me.

The search, solitary impatience in the soul.

1st day of work at BOOKINGS.

Fly, fly higher, flyover
And gaze at yourself.  It’s the air

13 uur: meet colleagues; the secretary, Arnie, who introduces the practical stuff with computers; Farid, Antonio, and Mariska, who closes the contract.  A trial month, 16 hours per week.  I leave at 5.

School: dubbelganger, doppelganger, someone who resembles someone else to an extreme … dubbelgangster.

School. Why go on, Caeiro used to say, but to keep on going on!

A little before one, I’m in Bookings.  I eat lunch with my colleagues in the lively room whose window overlooks the Rijksmuseum.  There’s sun, you eat the Dutch way:  salads, bread and cheese, juice and coffee and back to the office.  You have to exit the building in order to smoke.  Arnie and Antonio the Belgian instruct me:  call the hotels that didn’t pay the commission to Bookings, the online reservation service.  The clients book via Internet.  The hotels pay Bookings 10 to 15% of the price for the reservation.  Or they don’t.  Then one must remind them, sweetly threaten them.  There are many responses and justifications, dramatic ones in the Latin countries.

Antonio speaks Italian well but prefers Spanish.  Arnie and I understand each other in English; my Dutch isn’t so great.  Farid helps me with the computerized activity:  Excel, Powerpoint, Bla Bla Bla, etc.  Fortunately you don’t have to wear a tie.  And Antonio plays music from the radio and closes the door.

I go by the Albert Heijn looking for something to defeat my hunger.  Matahambre, the hungerkiller:  the name for a European almond cookie.  At one o’clock on the dot, back to Rabobank.  Springtime, everything seems to speed up:  it’s spring, I feel like I should wake up now, maybe I’m already awake.  And I’m hungry.

School. Toelichting: illustration. Not to be confused avec l'Illustration, the Enlightenment.  This is just about abundance with respect to.  To detail, to explain, to stretch oneself into something.

We study the phonetic difference between oo and o in Dutch, as in: roos (rous) and los, kook and lot, geloof and gezond, etc.

Intuitie volgen, says the teacher:  follow your intuition.  I agree with that.  Looking out the window I think about refreshing my gaze on a brick.

Genoeg hebben van: to be tired of something, to have had it up to here.  Example: ik heb genoeg van de winter. Wintertime. Goed!: probleem opgelost, problem resolved, etc.

Bookings, noon. Lunch with colleagues: people from all over, Argentina, Spain, Italy, France.  The sky is cloudy.  Antonio and I go out with women from Italy and Brazil to smoke a cigarrette.  What the hell.

Since you can’t smoke inside the building, the employees go out now and then, or often.  Like Belgian Antonio.  Marnix, department head, diventato arrogante padrone breaks le palle ad Antonio, e anche un pó a me … He orders the music turned down so far it’s inaudible, and he says the office doors must be kept open. Medieval.

Beginnen- begon- begonnen. Not so irregular after all: this music repeats.  Drinken- dronk-gedronken, vertrekken-vertrokken-vertrokken.

I go to Bookings along the canal.

Calling France, Italy, Spain.  Farid teaches, gives advice to create one’s own agenda. Happiness is a thing shared.  Why does man work?  Happiness is not a job.

Happiness is not work (it’s a warm gun, we know).

Inaffarato amongst discarded people, afine la carcasse. Quit:  I say goodbye to some of my comrades.  Including “the Boss.”  I shake his hand and see that he’s happy.  Me too.

After so many days in Bookings, I quit yesterday.  The impatience of a spring day, disgusted with empty work and the difference between simple employees and managers, or whatever.  In peace.

[1] Due to length limitations I’ve left various segments from this time span out of my entry here.  Relevant but far too long for this space are his reading notes on Wallerstein — they inspire brief reflections on historical empires and revolutions, including more notes on Holland. The notes arguably engage larger issues in Pérez’ writing career.