by an apprehension of mourning

I met Peter Lamborn Wilson in the late ’80s at Naropa Institute, and after acquiring his pamphlet Chaos, written under the takhallus Hakim Bey, became a devotee to his work. His support of DIY efforts was encouraging and validating, and We Press took up the invitation to “pirate” Chaos by way of corporate resources we had at our disposal at the time.

After falling in and out of touch over the years, on a visit to Woodstock in 2013 I learned he now resides there. Less than a year later — two days after my family moved to the Hudson Valley in August 2014 — I found my way to a poetry reading featuring Wilson, Sparrow, and Michael Brownstein at the Golden Notebook in Woodstock (which can be heard on Funk’s SoundBox: version archival). Knowing him primarily as a cultural critic and writer of prose, to hear Wilson’s verse was something new, and a delight. He read from an “unpublished six hundred page-long collected poems”; these works are animated, elegant, erudite, conclusory, sometimes humorous exhortations (e.g., “Bumpersticker”: “If you’d ‘rather be fishing’ / then fish for fuckssake” [424]).

I first learned of (and acquired) his book riverpeople (Autonomedia, 2013) that night. Being a “co-realization” with the local waterscape (and more), it was the perfect book to have fall into my hands, providing a poeticized orientation to things I was eager to know about regionally through a series of extraordinary written and visual mappings involving poetry, field trips, and various types of invocation. The book is so potent, communal, and beautiful, I almost can’t believe it exists!

In March 2015, seeking a collaborative project, I discussed doing a recording session with him. He brought up the six hundred pages of unpublished poems, suggesting we could document them. Having high regard for his writing, knowing his work as a poet is essentially unknown beyond the circle of people who are part of his community, this was a grand idea, and something different than any other previous audio project I’d done before: focusing on the work of a single poet over a course of many weeks. For one thing, the duration, scale, and informal approach enabled a series of routines to develop. Some were minor, some technical and pragmatic, and others symbolic. I decided, for example, to bring a different piece of small visual art along to each of our nine sessions, to “keep us company” and temporarily transform decor in his studio apartment during the many hours we spent at work on our endeavor. Chuck Stein joined us on two occasions, further adding to our ambiance and milieu.

Before offering Wilson’s own statement about the poems, here are a few comments of my own. One of the most striking aspects of this Wilson’s poetry or writing is his use of several well-known poetic forms (or “pseudo-versions” of these forms): the ghazal, sonnet, and haiku. While such forms may seem antiquated to some, they are not so when left to the devices of a writer as gifted — and yet loose — with craft as is Wilson. Along these lines, I also found it intriguing that he decided to begin our very first session by reading a madrigal poem written in 1600 by Thomas Weelkes — followed by his contemporary response to it. While not wishing to suggest Wilson is a madrigal-ist, I do believe it is plausible that anyone interested in setting these poems to music could do so. One sonnet proclaims his sense of the power of organized poetic projection:

Don’t slack off the Stakhanovite pace

of sonnet production now in this vital

transitional era between something

& something else probably equally

squalid — nor flaunt the Flaubertian

Further, the choice of a quote from Gérard de Nerval’s Aurélia ou le Rêve et la Vie as an epigraph to the manuscript would seem to indicate we are somehow witness to Wilson’s own rediscovery of, “the lost letter or the vanished sign.” where he recomposes “the dissonant scale,” and gains “strength in the world of the spirits” (4). In addition to those attributes or expressive dimensions, healthy doses of philosophy and blatant cultural criticism are clearly present. His poems are informative on multiple levels; some even became instructive. For instance, after hearing the poem “Stencils” (68), one line especially made an impression, inspiring me to produce a stencil featuring one of its lines (“Not A Landscape”). Wilson also continues exploring his interest in local waterways in several poems in this audio collection, including a series titled Hydrographicon (as part of the 5/7/15 session).

Poems in this sound archive were composed between 1999 and 2012 while Wilson lived in New Paltz, NY. After relocating to Woodstock he edited the material, resulting in this manuscript. Describing the body of work heard here, Wilson comments,

Moving to the country coincided with a terminus to a twenty-year project to figure out what the fuck was going on in the world. By that time, I figured out what was going on, so that was the end of that project. I decided I would take up art and poetry again, which I had put aside for a twenty-year period, more or less, and worked on prose. That period really started with T.A.Z., and the new period begins with Black Fez Manifesto (Autonomedia, 2008). The poems in Black Fez and Ec(o)logues (Station Hill, 2011) came out of that body of material, so they actually belong in with this stuff, but those poems are ones that I took out from the body of work, edited and finished during that period. The rest of it I just stacked up on my desk until I got around to doing something with it here in Woodstock. It took me a few months to go through the whole stack, and throw out stuff I didn’t like, cut lines I didn’t like, amalgamate and edit and rearrange it. (Conversation, 6/26/15)

Listeners engaging with this work may wish to reference a digital file of the printed manuscript Wilson read from (although he eschews a conventional, front-to-back approach), prepared by Nathan Smith and kindly provided to us by George Quasha; page numbers are bracketed [ ] in the index. As readers of this text will see, the author intends for the manuscript to incorporate illustrations, which are not yet in place; Raymond Foye generously supplied representative scans, which bracket this introduction.

Discussing the collection with Wilson, he emphasized the notion that the collection was not complete, and that it wouldn’t be so until printed in a book. His sense is that it is along the way to being finished — not raw, but not necessarily the final version either. In all we recorded for PennSoundmore than five hundred poems between April and June 2015. In them, Wilson offers an impressive degree of fluidity and wide range of topicality. These are lucid reflections and ruminations of someone who “WAS THERE THEN” (533), who keeps traversing expansive pathways, whose worldly experience is consequential and delivered to us via these poems now. 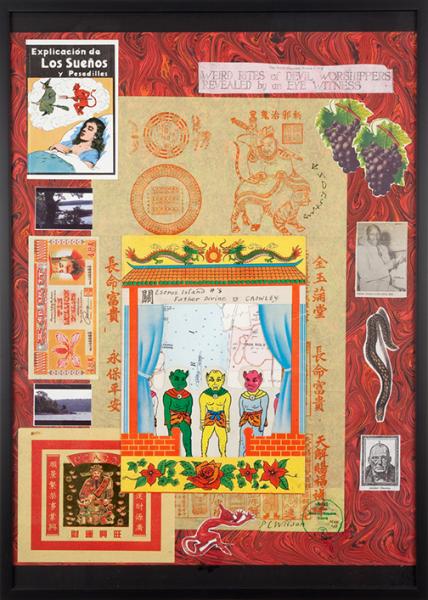 1. Note: all parenthetical citations refer to this 2014 collection of Wilson’s unpublished poems.