On May 6, 1934, The New York Times published an interview by Lansing Warren, entitled “Gertrude Stein Views Life and Politics.” The full piece is available online at the Times site.  A pdf of the article, as it appeared in the paper, in available here (useful given that the OCR version on the Times site has a few minor errors). Because of a remark made in this interview, Stein has been accused of being pro-Hitler in a number of recent articles. The accusation about Stein’s view of Hitler has been made by Bill Berkowitz in The Buzzflash Blog, Alan Dershowitz in the Huffington Post; Allen Ellenzweig in Tablet; Michael Kimmelman in the New York Review of Books; Sonia Melnikova-Raich, in JWeekly.com, Alexander Nazaryan in the New York Daily News; Natasha Mozgovaya in Haaretz; and Barbara Will in Humanities / NEH.  Even the Anti-Defamation League has repeated this defamation. [Addendum 6/9/12: The defamation still ciruclates:  Peter Worthington in Toronto Sun and Emily Greenhouse in The New Yorker.]

Saying that Stein endorsed Hitler for the Nobel Prize in the 1934 interview is like saying that Mel Brooks includes a tribute to Hitler in The Producers. In Stein’s remarks  about Hitler and the Nobel Prize, she associates Hitler with all that is bad in Germany. Her remarks constitute an attack on Hitler.

This is what is quoted by Stein’s detractors: “I say that Hitler ought to have the peace prize,” she says, “because he is removing all elements of contest and struggle from Germany. By driving out the Jews and the democratic and Left elements, he is driving out everything that conduces to activity. That means peace.” What is left out is Stein’s explicit claim that “activity,” “struggle,” and contest (which she later calls competition) are necessarily good. According to Stein, Hitler’s “driving out everything that conduces to activity,” that is, to “contest and struggle” — by means of the ethnic cleansing of Jews and others — would result in a deathly peace, what she calls “dullness and stagnation.” In other words, it would be a bad thing. “What matters” in government, she says, “is competition, struggle, interest, activity that keeps a people alive and excited in accordance with the instincts which best provide excitement for the individual people.” In the interview Stein strongly endorses more open immigration — “constant activity, new blood;” indeed, immigration of the kind that allowed the Jews, including her family, to become Americans, the subject of her monumental work The Making of Americans. Stein’s views about immigration directly contest the ethnic cleaning (of non-Aryan, “new blood”) of Hitler’s Germany. In the 1934 interview, Stein also, explicitly, expresses her distaste for Germans and her preference for the Americans and the French.

It shouldn’t be necessary to say this, but I hope those who wish to quote Stein on this matter will not take my word for what she says, or the mischaracterizations of Stein’s detractors, but rather will read the full interview. And keep in mind that the interview begins with a disclaimer that Stein’s remarks should not be taken at face value (a warning not taken by those who denounce her for her comments in the interview). Here are a few relevant excerpts from the interview:

Many of Miss Stein’s statements have an irrefutable terseness, though that terseness may conceal mystifying ambiguity such as characterized the utterances.

“There really are only two wholly sincere democracies, and those are the American and the French.”

“Building a Chinese wall is always bad. Protection, paternalism and suppression of natural activity and competition lead to dullness and stagnation. It is true in politics, in literature, in art. Everything in life needs constant stimulation. It needs activity, new blood. To the young people who, wanting to become writers, ask me for advice, I always say, ‘Don't think it isn’t possible to be senile at 22.’ It is even very difficult to keep from becoming senile in youth. It is hard to keep one’s self open and receptive to stimulation. Doing what other people tell you and being protected from this and from that is not so good, is not stimulating. You must face life and struggle. Satisfaction comes from overcoming opposition and sometimes from enduring things that are not supposed to be good for one.”

“That is the reason why I do not approve of the stringent immigration laws in America today. We need the stimulation of new blood. It is best to favor healthy competition. There is no reason why we should not select our immigrants with greater care, nor why we should not bar certain peoples and preserve the color line for instance. But if we shut down on immigration completely we shall become stagnant. The French may not like the competition of foreigners, but they let them in. They accept the challenge and derive the stimulus. I am surprised that there is not more discussion of immigration in the United States than there is. We have got rid of prohibition restrictions, and it seems to me the next thing we should do is to relax the severity of immigration restrictions.”

A related charge made against Stein is that she later actually nominated Hitler for a Nobel Prize. Edward Burns, in his essay for the Stein dossier, reports that the Nobel Prize Committee has denied that any such recommendation was made (see also page 414 of the Burns/Dydo appendix to the Stein/Wilder letters).

In her National Endowment for the Humanities essay, Barbara Will writes: “Yet surprisingly, most of Stein’s critics have given her a relatively free pass on her Vichy sympathies. Others have tried to ignore or justify equally inexplicable events: for example, Stein’s endorsement of Adolf Hitler for the Nobel Peace Prize in 1934, or her performance of the Hitler salute at his bunker in Berchtesgaden after the Allied victory in 1945.” Edward Burns and Joan Retallack give a full response to Stein’s complicated relation with Vichy. Will’s denunciation of Stein for her ironic comment about Hitler and the Nobel Prize is mistaken. But there is one more issue, the Stein salute in 1945, which Will grossly mischaracterizes. 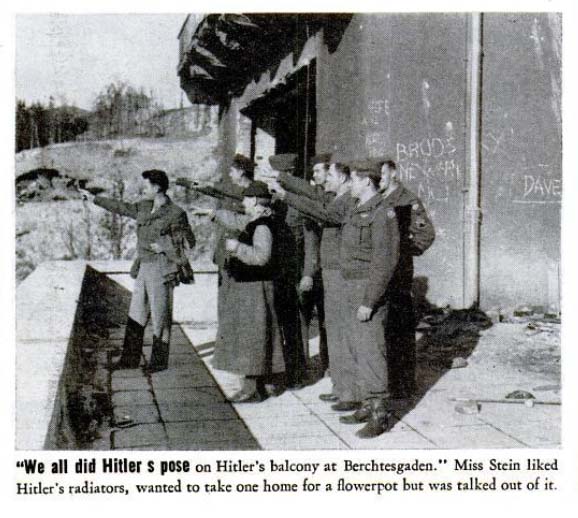 Stein’s “Hitler salute” refers to the August 6, 1945 issue of Life magazine, which featured an essay by Stein called “‘Off We All Went to See Germany’: Germans Should Learn to Be Disobedient and GIs Should Not Like Them No They Shouldn’t.” Stein’s essays appears along with a photo-spread of Stein and Toklas. The photo referred to by Will appears on page 46 of the issue, with a caption, “We all did Hitler’s Pose on Hitler’s Balcony at Berchtesgaden. Miss Stein liked Hitler’s radiators, wanted to take one home as a flowerpot but was talked out of it.”

According to the caption, she and six GIs are mocking Hitler and his gang saluting on the step of Berchtesgaden. But if Stein is indeed pledging her allegiance to the Fuehrer in this picture, as Will suggests, that would also go for the five GIs making the same gesture as she is. And it would mean Life magazine was publishing a picture of pro-Nazi GIs at the moment of liberation in 1945. When Will says that Stein’s motives in this picture are suspect, she is also casting aspersions on Life and the American soldiers that liberated Germany from fascism. In this photo, Stein appears to be illustrating the point made in the subtitle of the Life spread: “Germans Should Learn to Be Disobedient and GIs Should Not Like Them No They Shouldn’t.” (We’ll leave aside the fact the Stein and the GIs seem to be pointing to the field rather than saluting.)

The Life spread is filled with Stein’s enthusiasm for the American liberators, the GIs that are the subject of her affectionate and patriotic late work, Brewsie and Willie, which was published in 1946. The next time someone wants to talk about this photo of Stein with the GIs, let them quote what she told their general (as reported in the article on page 56):

When General Osborne came to see me just after the victory, he asked me what I thought should be done to educate the Germans. I said there is only one thing to be done and that is to teach them disobedience, as long as they are obedient so long sooner or later they will be ordered around by a bad man and there will be trouble. Teach them disobedience, I said, make every German child know that it is its duty at least once a day to do its good deed and not believe something its father or its teacher tells them, confuse their minds, get their minds confused and perhaps they will be disobedient and the world will be at peace.

Lest someone accuse me of a pro-Hitler gesture in my subtitle, “Seig heil, seig heil, right in der Fuehrer’s face” — it’s from “Der Fuehrer’s Face,” the 1942 anti-Nazi parody by Spike Jones and His City Slickers (featuring the inimitable Mickey Katz). (See the Movietone News short on YouTube.) The song, by Oliver Wallace, was taken from Der Fuehrer’s Face, the Academy-Award-Winning Walt Disney Donald Duck cartoon, which originally entitled “Donald Duck in Nuzi Land” (according to the Wikipedia article on the film). The cartoon was made in 1942 and released in 1943. In the cartoon, Donald Duck also gives the fascist salute, which may be why Disney kept the cartoon out of circulation, fearing what is happening to Gertrude would happen to Donald. (See the full film on YouTube.) 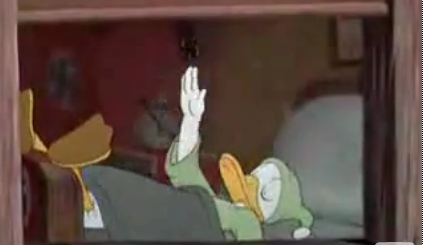 I no catch on.

Why Gertrude Stein?
Why now?