Over the past several years, Gertrude Stein’s wartime record has been subjected to a stream of misinterpretations, distortions, and disinformation in the mainstream press. Most of these articles are written by authors who are hostile to Stein’s literary works and who admit to their inability (and unwillingness) to read her work, including the works by Stein that directly address the issue at hand. In this Stein dossier, key documents are provided that refute the sensational tabloid accounts of Stein’s activities, views, and affiliations during the war  years, when she and Alice B. Toklas lived in Bilignin, France (near Lyon and Geneva). Stein’s connection to the Vichy government is complex and these complexities are fully explored in the essays and articles linked here.

Edward Burns, in his essay published for the first time as part of this dossier, writes that “the translation of Pétain’s speeches has preoccupied Stein’s detractors in recent years; they have used it as the wedge (along with a clearly ironic remark about Hitler’s deserving the Nobel Peace Prize) to denounce her — the denunciation by extension extends to her literary works. How can one read this writer, they seem to be saying, when she has such odious pro-Vichy, pro-fascist views. Each retelling of the story enlarges what Stein actually did, and rarely cites specific information, sources, or puts the translation project in an historical context. By focusing exclusively on this aspect of Stein’s life, her detractors avoid confronting Stein’s published writings during the war. If they did, they would find that her publishers were exceptional individuals who struggled to maintain the intellectual tradition of freedom of thought and expression.” Burns’s essay responds comprehensively to the mischaracterizations of Stein’s activities during the war years. It is a crucial work of scholarship, must reading for anyone interested in this topic. 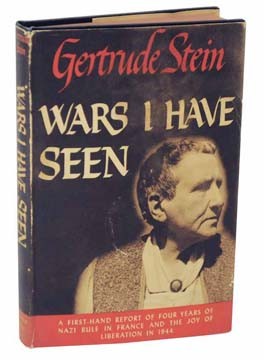 As Joan Retallack writes for this ironically titled dossier, Stein “was no fascist. That her clearly ironic statement about Hitler and the Nobel Peace Prize has been excised from its considerable context — which can leave no doubt of its irony, judicious or not — is a testament to the motives and intentions of certain readers, not to her own.” Indeed, as I note in my commentary, this willful, multiply repeated, misrepresentation of Stein’s remark in a 1934 New York Times interview is a little like saying that Mel Brooks includes a tribute to Hitler in The Producers.

When push comes to shove, as it has, I read Stein’s war years as a survivor’s tale. Jewish, female, homosexual, elderly (Stein was sixty-six in 1940), living in occupied France, Stein and Alice Toklas successfully escaped extermination. That is something for which we can be grateful. And I’m also glad that, by hook or by crook, Stein’s art collection was not looted by the Nazis. In the end, Stein was able to go on to write her great feminist opera, The Mother of Us All, a celebration of American democracy.

Stein’s wartime comments on collaborators, the terror of the German presence, and  the the Maquis [French Resistance] in Wars I Have Seen (1945) and the “Fathers are depressing” passage on Hitler, Mussolini, Franko, Stalin, and Roosevelt in Everybody’s Autobiography (1937).

Thanks to Edward Burns, Joan Retallack, Susan Bee, Wanda Corn, and Marjorie Perloff.
All materials © and used with the permission of the authors.

Here are links to a number of the recent articles (and one notorious older one) that denounce Stein for her wartime record: