Nico Vassilakis on the poetics of looking

Pleasure in viewing is a pleasure to think freely, visually, without destroying it with interior chatter. (from Notes 3: for Martín Gubbins)

What can you say about seeing? It’s wonderful, well, that’s not nearly enough. Try as you might, and thousands have, to describe the joyous nature of seeing...It’s a passage from the thing through the eye into the brain. Seems like a fantastically long journey where anything can happen. And it does. And no one ever seems to really be there. No one ever gets it right, so we continue to look, to stare. (from Staring Poetics Appendix One.)

A conversation with Nico Vassilakis about reading, looking, and visual poetry where my questions are invisible.

Perhaps I state the obvious when I write of staring at the alphabet and watching letters dislocate. Few vispoets write about what they do, even fewer about how they see.

The alphabet has a tendency to transmogrify when stared at long enough. It unravels and informs the viewer/reader of its simultaneous realities, that is, the housing of both visual and verbal elements.

Alphabets were the first steps away from prehistory and the ever-morphing reach into future speech. But sign and design logic have always been part of humanity's presence on the planet. Alphabet is about finding the most common way to comply in order to communicate with the widest population. Grammar's a yet further reach toward acquiescence. But that's what we work with, or else we'd each have our own individual alphabet. I'm not against that, it's just too damn inconvenient for everyone.

Visual poetry, for me, strips away the dominant verbal default we use to communicate. It relies instead on our dominant sense, eyeball intake. The language of seeing encompasses volumes and volumes of words, as well as, eliminates the awkward and limited capabilities of speech. 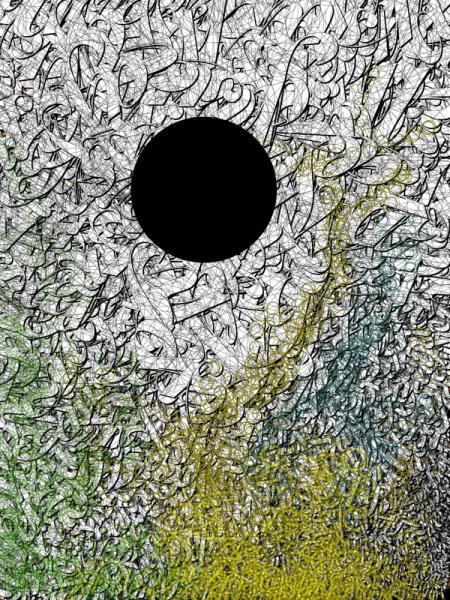 What's reading? Reading is an intentional look. We see or visually gather information in saccades. We seek cadence for saccades to capture a rhythm in order to proceed along a page. We hope cadence engages long enough for the eye to absorb it as reading writing. Writing is organized markings. The eye sees thinking, it reads a trail of thinking, left behind. Writing is organized markings left behind.

So, poems. How to read poems? And what of their cleverness? Virtually all writing is bound by margin. Margin logic and the act of returning. The saccades stop and return to their margin of origin, only lower each time. To confine and constrain. The eye forced to read marginalized space, unable to stretch past the fence, at least not often enough as we'd like. 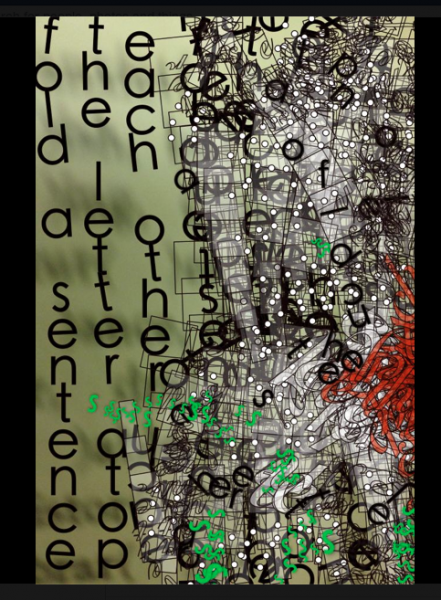 So, the eye likes to locate itself, to pick a spot to start. It's grown accustomed to starting, at least in Rome, at the upper left hand corner. It then marches from margin to margin like a foot soldier. The eye is easily bored if the markings aren't fetching. It seeks attractive thought, glowing thought, left behind.

So, if the eye were tracked while reading a textual poem it might look like endless tide coming onto shore.  What happens to the eye when it reads visual poems? It gets lost. It's desperate to locate a beginning. The eye is confused and tries to determine if it should be in reading or viewing mode. Two different eyes colliding. The tracked eye looking at vispo would tend to be chaotic, not orderly. It might resemble drunken spider webs or pin the tail on the donkey or any aleatory start looking for logic.

Is reading visual poetry a learned experience? Or is someone just preset to be drawn to it? I think it's about being fascinated by the interior space of letters.  You either are or you aren't. 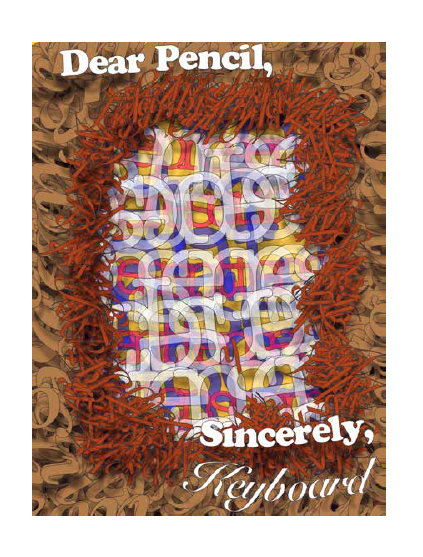 Where do letters go? After watching them discorporate. Liberated from confinements of the word. Simple accumulations that become decorative elements in visual poetry. Fascinations with representative sound units. After attempts at altering. After value's been reassigned and ciphers adjusted. What next for the emancipated letter? Digitize and spiff up, done. Letter as fingerprint. More letters, Letters that exceed, asemic Letters, done. For the letters that choose not to return to the word. Is it a kind of suffocation?

My interest is in watching letters discorporate from the words that contain or confine them.

The first tendency of letters, when newly released from their word bondage, is to become decorative. This is usually followed by design logic and visual pun, as well as other compositional templates. Next, letters either proceed into new visual poetics or return to the word. We are taught to return, but are seldom given an option. Yes, they said, let us go, free us. 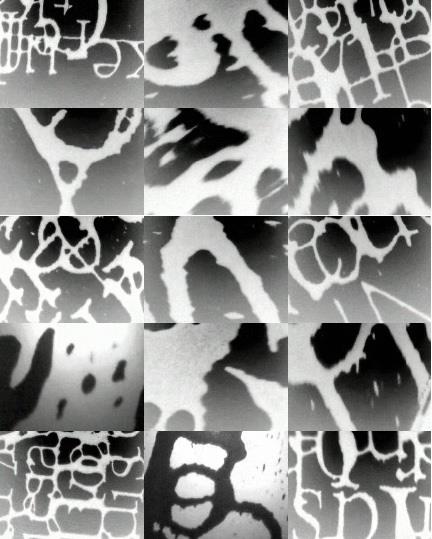 If words convey the image of a thought and letters are part of words, then parts of letters are...what's the most suitable response here?

In the past forty years, we have gone further into the neutron discovering more and more material. That final unit of information is what we seek in order to associate it to all other living material. Without the tiniest bit of the letter how can we have the word. A molecule is not possible without a sequence of atoms. The blind vispoets move about in the dark of their homes making and breaking code according to instinct. Science is the perfect unresolved pest. 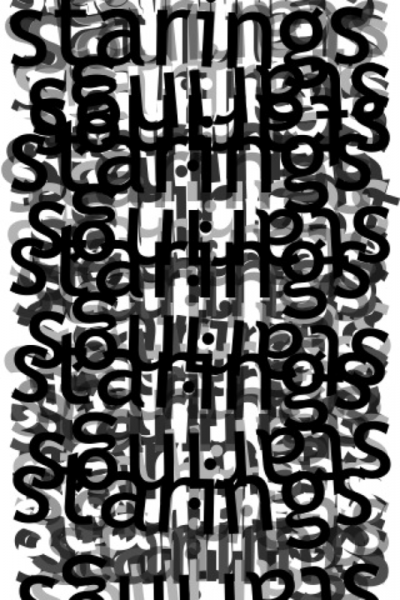 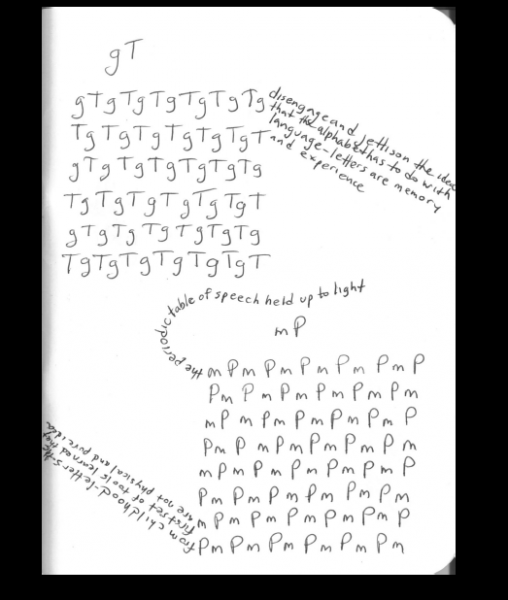 Which letter or portion of that letter will quell this desire of yours?

I've arranged these letters.Put them together—next to one another. Yes, I have.

There is no one word to satisfy what it is you want of me. No collection of words. No sentence affirming or destructive enough to keep you fully engaged.

Paragraphs, as you know, are too loud, so those we relinquish. 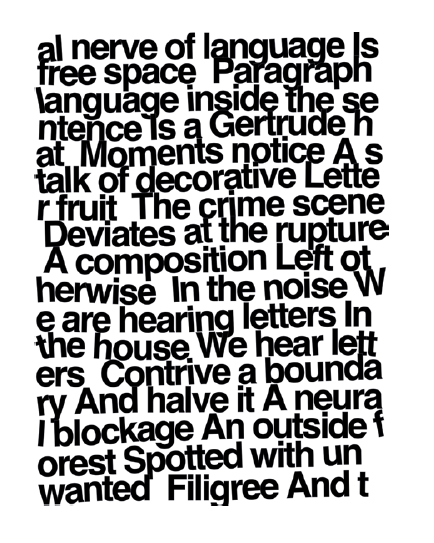 Artist, poet, and writer Nico Vassilakis was born in New York City. His books include the recent visual poetry collection MOMENTS NOTICE (Luna Bisonte Prods, 2013.) With Crag Hill, he co-edited the major anthology of visual poetry, The Last Vispo Anthology: Visual Poetry 1998-2008 (Fantagraphics, 2012), and has served as coeditor of Sub Rosa Press. He currently lives in New York. His website has many examples of his work plus links to many other of his publications and writing.