Or is language a virus, a semantically transmitted disease of textual interaction?

I asked Christian about his Odalisques. How does he conceive of their representationality, their portrayal of the female body and how do they relate to the pictorial tradition of the odalisque?  How, in general, does he conceive of ‘reading’ a visual text. What does ‘reading’ mean to him in this context? How is reading a kind of language-related looking, decoding, and visual engagement?

The Odalisques constitute a playful project (performed, as a kind of distraction, when I might have needed a break from more onerous writing). Each of the nudes in the series has been created by rearranging the 21 components used by typographers to design the letterforms of the alphabet. Each figure represents a permutation of exactly the same set of curves and shapes, each scaled and turned, perhaps overlapped, without being repeated or inverted. I am trying to evoke a nude form by drawing according to a constraint, using only a fixed array of “brushstrokes.” I am trying, in effect, to evoke the female figure as a kind of difficult, aesthetic potential, imminent within the beauty of a fractured alphabet. I have drawn these images with the toy found online at Type Is Art.

The Odalisques represent, for me, works of apprenticeship, in which I try to emulate the experience of a student, learning how to draw a naked, human model in a studio, doing so by practising the basics of anatomical proportion. The typical gallery of images archived at Type Is Art consist mostly of amateur doodles, executed offhandedly by visitors to the website, with hardly any attention paid to either formalist skill or aesthetic merit—and in response, I have simply tried to push the potential of this limited palette toward a more figural realism (simply because such a task seems much more challenging, given the restrictions of the toy itself). I think that, by striving to draw the female figure under constraint, I testify to my own desire to explore the limits of such a visual medium. 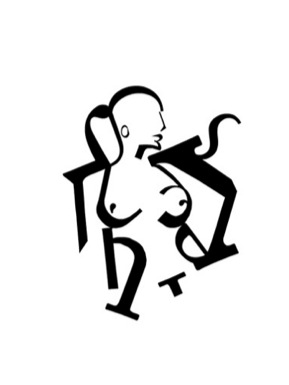 Aesthetic criticism has, of course, remarked at length upon the role of the nude in the history of art, describing the ways in which the body of the woman has become a cipher for both the idealized values of formal “beauty” and the subaltern values of erotic “desire.” I suppose that some feminist readings of my glyphs might argue that I am simply reiterating the male gaze, objectifying female bodies, by placing them under the duress of my own rulebound obsession — (when in fact, I think that these works support a more ambivalent evaluation). I think that, in addition to such scopophilia, they also testify to the libidinal upheavals that derange the grammar of letters, highlighting the underlying jouissance of a discourse, set free from any drive toward the transmission of meaning.

Taylor Lane, for example, is a British company, specializing in graphic designs for advertisers, and the company (now defunct) has won an Epica Award for publishing a calendar that features twelve pin-ups, each one derived from one of twelve different typefonts. Like every centerfold in porn-mags, each image features a shorthand biography about the adult model—except that, in this case, each bio describes the provenance of the typefont itself. “Miss Bodoni,” for example, is “often seen in Paris and Milan, and her face regularly appears in leading style magazines” (because, of course, Bodoni is one of the preferred typefonts used by Vogue). The company advertises its skills by literally depicting a “bodytext,” corporealizing language for a decadent clientele. 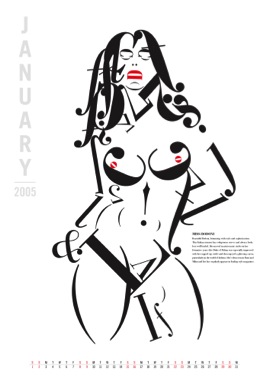 “Miss Bodoni” might showcase the degree to which language has taken on a subaltern character, finding itself “prostituted” for use in both artistry and business (and thus such ironic images in this calendar might make explicit the degree to which both supermodels and centerfolds find themselves shaped and formed by the language of patriarchal advertising) — but for me, the Odalisques also suggest the extreme degrees to which a poet might begin to fetishize the sensual, optical appeals of language itself, admiring the contours of letterforms in a manner reminiscent of obsessive, libidinal fixations. The letters in the captions of erotic photos from a magazine begin to displace the nude body itself, behaving like it rather than referring to it, posing as the seducer of readers.

Reading thus becomes illicit, devolving into little more than the ogling of pretty bodies upon the page — and “the pleasures of the text” (so championed by Roland Barthes) begin to feel more sleazy than erotic. Readers might even feel obliged to take offense at the prurient conceits of such nudes, especially when the unveiling of their meaning begins to resemble the attraction of a striptease. To peruse visual poetry is to linger over the body of the word, perceiving it as an alluring, but detached, ideal—the fantasy of a meaningful connection, presented to us in all its nakedness, promising to be possessed, but nevertheless asserting its absolute autonomy from our own desires. We may believe that we are the sultans of poetry itself—but we are, in fact, all thralls to its charms.

Christian Bök is the author not only of Crystallography (Coach House Press, 1994), a pataphysical encyclopedia nominated for the Gerald Lampert Memorial Award, but also of Eunoia (Coach House Books, 2001), a bestselling work of experimental literature, which has gone on to win the Griffin Prize for Poetic Excellence. Bök has created artificial languages for two television shows: Gene Roddenberry’s Earth: Final Conflict and Peter Benchley’s Amazon. Bök has also earned many accolades for his virtuoso performances of sound poetry (particularly the Ursonate by Kurt Schwitters). His conceptual artworks (which include books built out of Rubik’s cubes and Lego bricks) have appeared at the Marianne Boesky Gallery in New York City as part of the exhibit Poetry Plastique. His The Xenotext Experiment is a poem that will be coded, translated, and constructed into a genetic sequence, and then implanted onto a bacterium. The Utne Reader has recently included Bök in its list of “50 Visionaries Who Are Changing Your World.” Bök teaches English at the University of Calgary.