Fabulist of the surface

Márton Koppány and the shimmer of meaning

Márton Koppány’s deceptively simple images, are comprised of the small visual symbols of our modern life: yes, ellipses, quotation marks, and speech balloons, but also everyday objects such as a chair, a fish, some sunglasses. But he doesn’t attempt to represent these things, but rather presents simple photographs of them. It’s our clipart-world, our JPGscape. And these images — from the language of words or the language of visuality — play together on a flat field comprised of simple unmodulated colours. They live in that unhurried purgatory of the semantic present, living out the relationships of unworried signs in an semiotic utopian playground without hierarchies. Yes, they interact. Speech balloons and ellipses point to notions of speech and ellipticality. Fish seem to swim in the visual field. Commas remind us of the messy and complex world of language which they have opted out of, or have — at least for now — left to join a visual commune.

But his work also speaks to the surface. Language is a Mobius strip. It’s all surface, yet we know that it’s actually a trick: this surface has two sides—it's three dimensional after all.

I feel all Heisenbergian when I look at Koppány's images. I feel delight and bemusement. And sometimes I feel unsettled.  But whatever the sensation, I get the sense that the images are changed by my viewing. In some way, they exist out of time, beyond 'reading.'

When I was a small child, I'd look at text and wonder what it might mean. Because I didn't know how to read, it meant everything. Sometimes, I was disappointed when I learned what it meant. See Dick run. I discovered that meaning 'something' is smaller than meaning 'everything' or 'anything.' It's like discovering that the endless forest trail at the end of your street isn't an infinite path but actually loops around and ends up at the greengrocer's, the library, or emerges behind Mrs. Black's house.  Meaning is a kind of Mobius strip.

Much of Koppany’s work seems to assume the form of an uninterpretable allegory. A fable without clear moral or referent. It is about fablicity. About the rich depths of surface. About puzzling over. The shimmer of meaning. These texts aren't just inscrutable or ambiguous ideographs, asemic, parasemic or hemidemisemic visual symbols without clear meaning, but poetic tableaux. They are single moments from a rich and complex narrative, stills from the cinema of language. Visual koans. 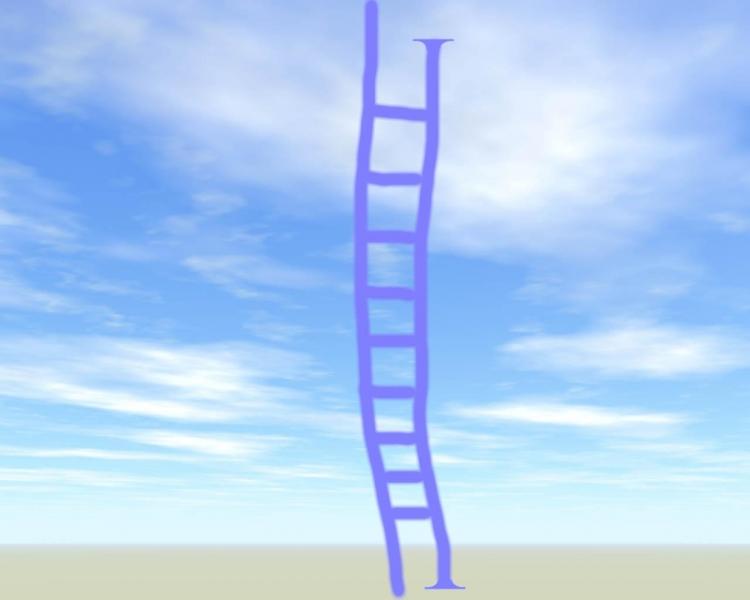 Here before the featureless landscape, a kind of metaphysical eternal present, intensely here and nowhere is a Jacob’s Ladder that is not a ladder. Or a ladder from the extended alphabet of dream.

But what of the figure’s legs or arms? Only one side has serifs. Hooves? Half ladder and half letter. Limping. Reaching.

The ladder of language between earth and sky. Purgatory.  One can travel up or down.  The centaur cannot hold.

The purple of the ladder: between the blue of sky and the brown of earth.

The edges lack focus as in a dream or a child’s drawing. Or an image simply drawn by a computer paint program. But the serifs are sharp. Language seems to give stability. Focus. Clarity. But yet it's only on one side. And what is in focus anyway?

Language is the mystery. Looking is mystery. Inscrutable. Unreadable as reading itself. As meaning.

Márton Koppány writes: The letter H—and/or the rungs of an (endless) ladder. Switching from seeing to reading, from reading to seeing, from visual to conceptual, back and forth, back and forth. 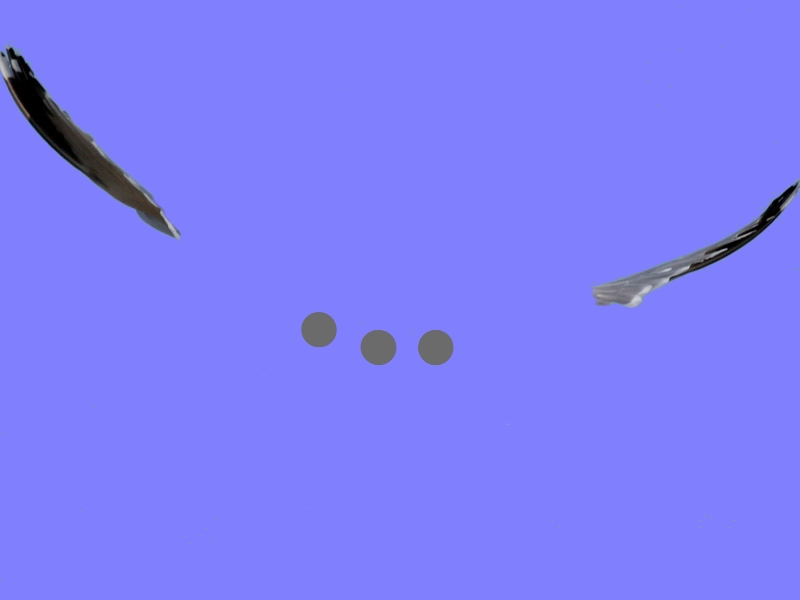 I asked Márton a number of specific questions about his work. For example, I asked about something  he had written elsewhere: how he had abandoned his native Hungarian language in his writing and chose visual expression instead.

He thought about how best to reply. He decided to compile some explanations about various visual works which wouldn’t appear here. The names of which he wouldn't specify.

So: even his explanations are fables without referents. It’s the mood of thought. The surface of a great lake below which we imagine great Leviathans of language and meaning undulating in the bathypelagic depths.

Both are about seeing that the answer (period) is implicit in the question, and no question is completely grounded in anything—they also hang in the air, or grow out of it.

A white (erased?) (already "missing"?) comma-man is sailing, quietly, in a small black boat consisting of an opening bracket, and under a series of opaque closing brackets consisting of some fleecy clouds in motion.

I imagined an "and so on," changing direction unexpectedly, and flying away as a whole.

One of the page numbers—No 2—is swimming (in flock) across itself and the other pages, toward the "unknown," which is still numbered.

"Still" is the reflection (on the water) of something that can't be seen anymore. "Still" is its only presence. And it is "still" present!

The wavy lines are the different levels of a lake, the lake is turned on its side in this piece again (to give the poem a chronological order, since writing in our system goes from left to right.) The waves move step by step toward full immobility, toward the hypolimnion level, where the temperature is always the same. The fate of the collaged fish will be to halt, but it is delayed by the bubbles of an ellipsis that turn out to belong to the final capital F that stands for Fahrenheit and of course for Fish. And a capital F is still something that looks forward…

My intention was to write in light on the dusty canvas of the sky a word which is illuminated by the four small quotation "lamps"—but also hidden by their unusual arrangement. It is about the paradoxical nature of evocation. "Aside" was the first to come, but it was too descriptive, then "ashes," with the thought of my family, but it was too direct, finally I chose "dust."

In the sky blankness should be inserted, and in the blankness the sky as the vees indicate it (do they?) respectively.

The piece was made because I suddenly realized that the v's, I mean the symbols of insertion, are breathing—they inhale blankness when "staying" in the sky, and inhale sky when staying in blankness.

It is a human creature trying to keep open the opportunity of a meaning. If he/she collapses, the upper dot falls down and the colon, typed in Arial, disintegrates.

In a sense, all my work is self-correction.

Márton Koppány (b. 1953) is a writer, translator and editor living in Budapest, Hungary. His work has been widely published in print and online. Recent books include modulations and Addenda.